I handed over a couple of one dollar bills to pay for my coffee. The image of George Washington caught my eye, and I smiled. It would be nice to relax for a moment and pick-up Valiant Ambition by Nathaniel Philbrick, the Revolutionary War history book I was reading. Settling into a comfortable chair, I soon immersed myself in the drama of the Battle of Princeton. Guided by the book’s text, my imagination created a vivid image of the unfolding conflict. George Washington – looking splendid on a large horse – galloped along, leading his men and shouting “It’s a fine fox-chase, my boys.”[i]

Startled, I closed the book. It seemed too difficult to accept that the “Father of His Country”, the dignified George Washington, and the reserved and diplomatic leader of the 1790’s could be riding recklessly, shouting in a full, commanding voice, and – on other occasions – struggling to keep his temper controlled when dealing with difficult subordinates. Then I felt foolish. My image of George Washington was based on the Gilbert Stuart presidential painting from 1797 that we’d studied in high-school art class!

Of course, George Washington was always one man, but – like every person – he was different in appearances and personas during the varying stages of his life. Perhaps I’m not the only one who has thought of General Washington using the presidential image. Maybe it’s time to reevaluate our “images” of George Washington, particularly during the Revolutionary War period.

Born in 1732, Washington was in his mid and late forties during the American War for Independence. The experiences of his earlier life crafted his leadership skills which would be refined during the conflict. Diligent student, adventurous surveyor, militia officer, “plantation” owner, society member, husband, and step-father – all these roles built or added character and skill-sets to Washington’s life. The war itself would continue to hone his character and principles, teaching diplomacy, control of temper, increased ability to work with others, and a better understanding of the American people; all skills that he would need at the Constitutional Convention and as the first president.

According to one war-era observer: “His Excellency was on horseback, in company with several military gentlemen. It was not difficult to distinguish him from all others. His personal appearance is truly noble and majestic, being tall and well proportioned. His dress is a blue coat with buff colored facings, a rich epaulet on each shoulder, buff underdress, and an elegant small sword, a black cockade in his hat.”[i]

In his history book 1776, modern historian David McCullough describes Washington this way: As apparent to all, His Excellency was in the prime of life. A strapping man of commanding presence, he stood six feet two inches tall and weighed perhaps 190 pounds. His hair was reddish brown, his eyes gray-blue, and the bridge of his prominent nose unusually wide. The face was largely unlined, but freckled and sun-beaten and slightly scarred by smallpox. A few “defective teeth” were apparent when he smiled. He carried himself like a soldier and sat a horse like the perfect Virginia gentleman. It was the look and bearing of a man accustomed to respect and to being obeyed. He was not austere. There was no hint of arrogance…[i]

With such splendid descriptions (and there are others available), why is it so challenging to picture the “right” George Washington when studying the Revolutionary War? I think there are three major reasons Washington’s “war image” is overly influenced by his presidential image.

First, the presidential image is best-known. From earliest grades in school, children see the painting of George Washington with his stiff powdered hair, looking dreadfully uncomfortable with his false teeth. (As a kid, I secretly wondered if Washington could smile!) While this painting is a fine piece of art and debatably a good representation of the first president, it has unfortunately become the only image people associate with Washington. And it’s awfully hard imagine that Washington galloping on the battlefield and shouting in stentorian tones.

Secondly, in relative terms, there simply weren’t many contemporary images of Washington created during the war. Most of the drawings and paintings representing Washington during the 1770’s were made after the war – either during his presidency or in the 19th or 20th Centuries. And those images took the presidential face and head of Washington and put it on top of a body in a general’s uniform. Thus, even the “war images” of Washington tend to be overly influenced by the man of a later decade.

Thirdly, during the Revolutionary War, Washington was not quite a genius. (Don’t tar ‘n feather me for that statement just yet…) Yes, he had leadership skills. Yes, he was inspirational. No, he was not perfect. Do the math; Washington lost a lot of battles. He got good at retreating to save the army. Sometimes – particularly in the early years – his overconfidence created opportunities for disasters. Of course, there were times when his daring paid off (think Trenton), but there were other times it did not. When creating “marble heroes”, Americans have routinely chosen the best possible moment to glorify; for Washington, that moment was his presidency. His presidency was a culmination of all the character tests and providential lessons through the years, and we have tended only to focus on the triumphant, refined image.

After considering these challenges and spending some extra time looking at the war era paintings of Washington, I feel more prepared to have the correct “war image” of this American general. It also made me muse on Washington’s popular image; most people of the modern era would likely be dissatisfied if they knew their later-in-life photos (complete with awkward dentures) would be the way they will always be remembered. It’s a strange twist of irony that we automatically accept the presidential image of Washington as the almost universal image of this leader and are less familiar with his appearance in his physical prime. 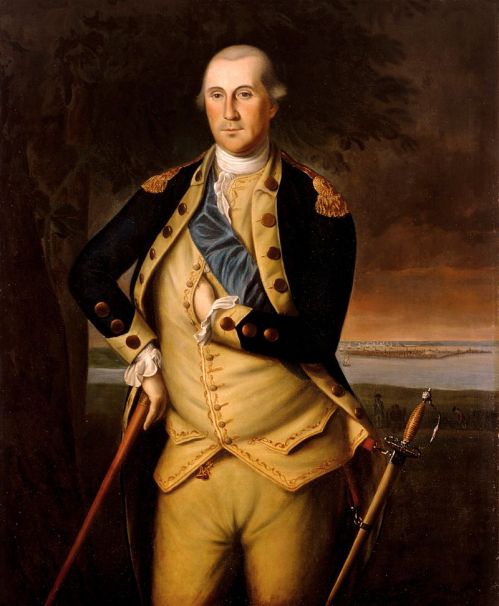 There’s no erasing the presidential image of Washington from the American mind and culture. Nor would I advocate that. However, to completely understand Revolutionary War history in proper context and with the right images, it’s important to investigate the visual art (paintings or sketches) from the era. With all respect, we want the younger (and debatably more handsome) George Washington as the commanding general in our imaginations as we pursue our studies of leadership, battles, and culture during the War for Independence.

*Sarah Kay Bierle has a B.A. in History from Thomas Edison State University and is exploring and enjoying her career path as a historian, writer, speaker, and living history enthusiast.

“History, research, and writing are my passion,” she says. “I desire to make history more understandable and accessible to Americans who stumble through school thinking history is a collection of random dates, places, and events. Through thought-provoking writing, I want people to reconsider the past and find lessons which may inspire them to live more courageously today.”

Much of Sarah’s research focuses on real people and their trials and successes of everyday life in challenging eras, with a primary focus on the Civil War. Her interests include the war’s effects on maritime industry, the civilians’ struggles, surgeons and medical care, and officers and families of Virginia. She has also published an award-winning, well-researched historical novel about civilians at the Battle of Gettysburg.

When not researching and writing, Sarah enjoys spending time with her family and friends, reading classic literature, quilting, and traveling. She maintains a personal history blog at http://www.gazette665.com

**Note to Editor: All pictures are in public domain. Captions are below.

Photo 3: This artwork was created in 1866. George Washington’s facial features look more like his presidency image than the 1776 portrait.

3 Responses to Finding The “Correct” Image of General Washington