The financial direction of the gunnery was put into the hands of Fielding Lewis. Born into a wealthy family at Warner Hall in Gloucester County, Virginia in 1725, Fielding was the third son of John and Frances Lewis. Following his father’s footsteps, Fielding was a prosperous industrialist, running a fleet of ships to England and English ports, exporting tobacco and grain. In addition, he operated a store and served on numerous committees and local government associations that laid the groundwork for governing what would eventually become the United States of America. Fielding was addressed as Colonel Lewis, more often than not, reflecting his participation as a provider of provisions and raising the local Spotsylvania militia during the French and Indian War. Feats he was to repeat and go beyond during the Revolutionary War.

Often using his vast personal wealth, Lewis purchased schooners and sloops, outfitting them with artillery to patrol the Rappahannock River in an effort to protect civilian lives and property, and to stop British troops from seizing colonial weaponry.

In February 1776, Lewis purchased the schooner, Liberty, outfitting it with armory. Later, renamed Hornet, it sailed under the command of Richard Taylor of Caroline County. It carried a crew of twenty-one men. Lewis, then purchased a sloop named Defiance and placed it under the command of Captain Eliezer Callender. In April, Lewis purchased the pilot boat, Adventure, appointing Captain William Saunders at the helm.

Lewis commissioned ships to be built as well. The row galley was the most popular vessel used for defense of the river and harbor at the time. Although equipped with sails, the primary source of power was the oar. Larger row galleys measuring seventy feet long could carry a crew of fifty men. These galleys often-times carried two large eighteen pound cannons. Lewis commissioned another ship named Dragon and launched it in 1777; it was used primarily to patrol the Chesapeake Bay.

Free and enslaved blacks were often members of the crew. Around one-hundred and forty black men served with the Virginia fleet; one to ten on each of the seventy vessels. About ten served on the Dragon. Some of these men may well have been slaves belonging to Lewis or Dick. Only ten percent of black men who served in the navy were free, most were escaped slaves posing as free men, like Crispus Attucks, the first casualty of the Revolutionary War. To fulfill enlistment quotas, slaves served as substitutes for their masters. Unlike white men who served for a specific time, blacks were in it for the long haul; for only then could their service earn them the promise of freedom.

The first ship to engage in warfare was the Hornet, capturing four enemy merchantmen in the Rappahannock. Their ship, Speedwell, was taken into custody by the Virginia Navy and sent to the West Indies to bring back gunpowder. Fielding imported guns and ammunition for use in the colonies by the Rappahannock and the Patsey.

Lewis’s commitment to freeing the colonies from British rule was unrelenting. A wealthy man, he sacrificed nearly everything he possessed to see his dream of American independence from Britain rule become a reality. He sat on one local government committee after another. He bought ships and turned them into naval ships. He managed the financial direction of the gunnery, as well as procuring military materials. Col. Lewis appointed ship captains and he raised regiments, adding manpower to the Continental Army. During this time, Lewis didn’t neglect the on-going responsibilities he administered before the war. He presided over legal cases as the Justice of the Peace, provided religious leadership, administrative duties and support for the poor as a vestry member of St. George’s Anglican Church, and ran his plantation and mercantile business.

The Fifth Convention met in May of 1776 and authorized the Virginia Committee to reimburse Lewis 1,059 pounds to pay privateers who imported provisions. He was also reimbursed an additional 1,800 pounds in July. However by the end of the war Lewis was virtually bankrupt. He was owed a considerable amount of money but he never recouped all of the money he invested. By 1780, Lewis’ health had deteriorated to the extent that he was no longer able to manage the gunnery and the full responsibility fell on the shoulders of Charles Dick, who had used his personal credit to finance various tasks related to the success of the gunnery. The Convention was delinquent in its payments to Lewis, Dick and the sixty employees at the gunnery. Dick closed the factory for a time due to his inability to meet payroll. He wrote to Governor Thomas Jefferson his frustrations about the lack of funds:

“I will do all in my Power to carry on the Work; but impossibiltys I cannot do … There must be proper stores laid in, Provisions, Walnut Plank for Gun-stocks, Iron, Steel are the principal articles, and these require even a good deal of Real money – And without which little or nothing can be done; I cannot speak plainer.”

The gunnery closed in 1783, the same year that the Treaty of Paris was signed establishing the independence of the United States of America. The manufacturing plant continued to operate, repairing muskets badly damaged after the war. Subsequently, once the gunnery ceased operations, the property and land was sold to trustees of the Fredericksburg Academy, whose president was James Mercer. The academy opened in 1786.

The last major battle of the Revolutionary War occurred at Yorktown. Major General Charles Cornwallis surrendered to General George Washington in October of 1781. By December, Fielding Lewis, at the age of fifty-six, had succumbed to his battle with (consumption) tuberculosis.  Charles Dick died a few years later in 1783. True patriots, Fielding Lewis and Charles Dick sacrificed their fortunes and health to free colonial America from British rule and were eye-witnesses to the birth of a new nation.

Today, at Historic Kenmore, in Fredericksburg, Virginia, stands the 18th-century plantation home built by Fielding Lewis and Betty Washington Lewis. The home, the pre-Revolutionary colonial kitchen and the Crownsinshield Gallery are open to the public for tours. Besides the antique collection of furniture and decorative arts, a musket produced by the Fredericksburg Gun Manufactory hangs in a display case in the gallery.

In the pages of American history, Col. Lewis and Charles Dick stand out as men whose faithful and persistent dedication to the cause of liberty lives on as an example of true patriotism.

“Fielding Lewis and Charles Dick may not have served on the battlefield during the Revolution, but they fought their own battles on the homefront, sacrificing all they had to keep the Gunnery running, naval ships operating and the militia supplied.  Their sacrifices should remind us all to ask ourselves if we would be willing to do the same if ever called upon.” – Meghan Budinger, Aldrich Director of Curatorial Operations, The George Washington Foundation. 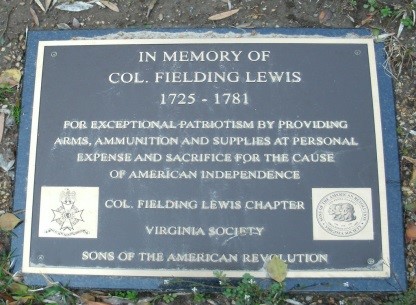 Meghan Budinger, curator, sent me a list of questions that I had to answer in order to get permission to use the photographs from their collection.

Fielding Lewis and the Washington Family; A Chronicle of 18th Century Fredericksburg  by Paula S. Felder, © 1998.

Prelude to a Revolution: Dunmore’s Raid on the Williamsburg Magazine, by Norman Fuss, www.allthingsliberty.com