Recently, I had the chance to head to New England to take photos for an upcoming publication in the Emerging Revolutionary War Series. While there I ventured to Salem, Massachusetts and New Castle, New Hampshire. Two great places filled with American history and also what could have been even more American history.

The shooting war that became the American Revolution began in Lexington and Concord, Massachusetts on April 19, 1775. Yet, these two places; Salem, Massachusetts and Fort William and Mary in New Hampshire, almost, caused the war to begin.

Here is what happened.

On December 14, 1774, local militia raided the British post garrisoned by six men at Fort William and Mary near Portsmouth, New Hampshire. Faced with over 400 militiamen the garrison proved obstinate and did not accept surrender and when faced with an assault, actually fired three cannon shots at the charging militia. Open combat ensued but no deaths occurred before the militia gained the fort.

Entrance to the fort, with the plaque commemorating the events in December 1774 to the right of the entrance.

During the afternoon, the militia would deprive the fort of over 100 barrels of precious gunpowder. By the next day, over 1,000 militiamen had arrived to lend support and within a few days, British General Thomas Gage had dispatched a small force on a British naval vessel but by the time they arrived, the commotion at Fort William and Mary had subsided.

Three months later and located approximately 50 miles south of Fort William and Mary is Salem where the following incident took place. Thomas Gage ordered 240 men of the 64th Foot Regiment under Lt. Col. Alexander Leslie on February 27, 1775 by water to the town. Upon arrival the force hovered off the coast waiting for the residents to attend their regular Sunday sermon. Soon after, the 64th Foot began to make the five mile march to Salem. A column of nearly 250 British regulars brought a lot of attention and soon riders were riding ahead to Salem to warn them of the approaching British. The men in Salem began to remove the cannon and hide them in the countryside.  The main objective for Leslie was a blacksmith shop on the north side of the North River.  Here is where it was reported that the ship cannons were being refitted for field use. 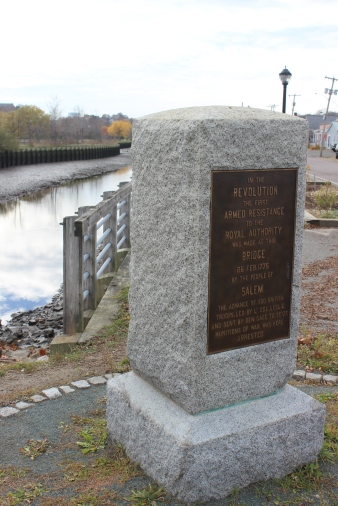 Historic Marker commemorating the spot of armed resistance at the Salem Bridge on February 27, 1775.

The issue at the river was a draw bridge was the only way across and as the British approached, several men raised the drawbridge so the British could not cross.  By this time militia was on the opposite banks of the North River. An armed confrontation, one of many this winter, between colonials and Royal troops ensued. Leslie demand that the bridge be lowered so he could cross but the militia would not budge. Meanwhile, the cannons Leslie was looking for were being dispersed. Leslie threatened to fire on the militia, but Leslie’s senses got the best of him as he recognized hundreds of townspeople were now turned out and watching.  He did not want to have blood on his hands this day. Plus the safety of his own men became in doubt as the day was getting long and he knew he had to extricate himself somehow.

Soon a local minister proposed a compromise, the bridge would be lowered and the British could cross and march to the blacksmith forge just a hundred yards beyond the bridge.  If no cannon were found (which by now, they were all removed) then Leslie would turn around and march his men back to the ships on the shore.  To Leslie, this was an honorable compromise as his orders were to cross the river and investigate the blacksmith forge and shop. Soon after the British crossed the North River, they re-crossed and marched back to their ships.  Open rebellion was again thwarted. But a deadly precedent was set, the militia learned that the British did not intend to fire on them and such the bravery of each militia unit at each alarm was amplified.

Both of these affairs did not start the war. Both could have. We may never know why. But, what we do know is that they were example of how close the war was to starting. Lexington and Concord became the tipping point.