“The soul of General Abercromby’s army seemed to expire”: The Death of George Howe, July 6, 1758

They waded ashore during the morning of July 6, 1758. Full of confidence, the vanguard of Major General James Abercromby’s massive army of over 16,000 men had completed its nearly thirty-mile trek northward across the waters of Lake George. They began pushing inland – men from Thomas Gage’s 80th Regiment of Light-Armed Foot, Phineas Lyman’s 1st Connecticut Regiment, and of Robert Rogers’ famed rangers – scattering small pockets of French resistance. By early afternoon the entire army had debarked at the designated landing site and formed into four columns to begin its advance towards the primary objective: Fort Carillon. Moving forward into the thick wilderness with the rightmost column of mixed regular and provincial units was Abercromby’s second-in-command, Brigadier General George Howe. [1] 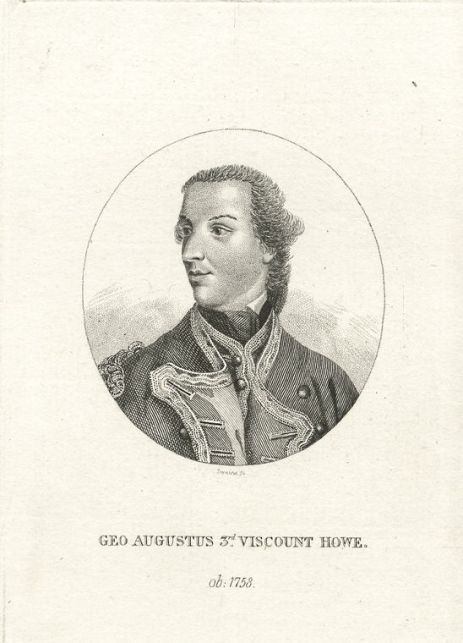 George Augustus, Third Viscount Howe, was born in Ireland in 1725. Like his younger brothers, Richard and William, George was destined for a career in His Majesty’s Forces and to serve in North America. His father, Emanuel Scrope, Second Viscount Howe, was a prominent member of parliament and served several years as the Royal Governor of Barbados before dying there of disease in 1735. Upon his father’s death, George assumed the title of Third Viscount and in 1745, at age twenty, was made an ensign in the 1st Foot Guards. Subsequently serving as an aide-de-camp to William Augustus, Duke of Cumberland, Howe fervently studied the strategies and tactics employed by his own commanding officers and the enemy, and witnessed firsthand the carnage of the War of Austrian Succession. Just ten years later, when the world was set ablaze by war yet again, George was ordered to Halifax, Nova Scotia with a commission as colonel of the 60th Regiment of Foot (Royal Americans) that was set to take part in a failed operation to capture Fortress Louisbourg in 1757. He was later made colonel of the 55th Regiment of Foot, and in December, appointed Brigadier General by William Pitt. The following summer, he accompanied the largest field army ever assembled in North America up to that time as its second-in-command.

In an army that struggled to understand the true nature of warfare in North America, Howe was a pioneer. He was open to all suggestions and was genuinely enthralled by the colonists’ irregular form of fighting. He admired their skills and followed them on patrols to learn their art. Howe viewed the colonists as partners in the war against France, not as simply subjects of King George II.

His men saw in him something special and revered him for his “robust Soldier-like Constitution, his bold, enterprising Spirit, and every other military accomplishment… His soldiers love and fear him, and are willing to comply with his Commands, because he first sets them an Example.” He made it a priority to endure the same hardships as his men by participating in the long marches on foot and carrying his own provisions, as well as sleeping and dining as his men did. George Howe did not fit the stereotype of a vain British officer.[2]

Feeling that he held a comfortable enough grasp of irregular warfare in North America, Howe began instituting changes within his command and abandoned British Army regulations in some cases. He began forming light infantry companies that could be better utilized for intelligence gathering and skirmishing in heavily wooded terrain, and he trained his regulars to fight like the colonial rangers. The Pennsylvania Gazette reported that, “… With how much Care he [Howe] has been forming his regular Troops to the Method of Bush-fighting all Season … he has now, it is said, made them as dexterous at it almost as the Rangers.”[3] Along with the tactical changes being made to the way his men would fight that summer, he also modified their uniforms to be better suited for the wilderness. He ordered the men to cut their hair, trim the tails off of their waistcoats, round the brims of their cocked hats, and brown the barrels of their muskets to camouflage them. He emphasized speed and maneuverability, ordering that no soldier could carry “more than one Blanket and a Bearskin, no Sash nor Sword, nor even Lace … [and] No Women [are] to follow the Camp, to wash our linen.” By July 5, 1758, Abercromby’s army of British Regulars and colonial provincials was assembled at the southern end of Lake George and ready to embark upon what would become the costliest campaign of the war.[4]

Bernetz Brook (now Trout Brook) is a tributary of the La Chute River, the unnavigable waterway that connects Lake George with Lake Champlain. Where the former emptied into the latter was roughly two miles from Fort Carillon (Ticonderoga). When Abercromby’s army began landing the morning of July 6, the French abandoned their forward camps near the shore of Lake George and along the La Chute River and began hastily retiring to the defenses of Fort Carillon. A detachment of 350 men, however, had been performing a reconnaissance several miles southwest of the British landing site near present-day Rogers Rock. Watching the debarkation of Abercromby’s force unfold in front of them, and seeing the billowing smoke from the French camps signaling the retreat, the detachment, led by Captain de Trepezec, hurried its way northward to Bernetz Brook, where it would follow the water east and hopefully to the safety of the Marquis de Montcalm’s main army at Carillon. With the advance of Abercromby’s columns north and parallel to the La Chute River, Trepezec’s men were cut off from the rest of the army.

Around 4 p.m., George Howe’s column, which had been sent forward to screen the advance of the army, began to arrive near the confluence of Bernetz Brook and the La Chute River. His mixed contingent was comprised of Rogers’ Rangers, the 8oth Regiment of Light-Armed Foot, the 1st and 3rd Connecticut Regiments, 1st New Jersey Regiment (Jersey Blues), and 1st New York Regiment. The Connecticut men brought up the rear of the advancing line and were attacked by Trepezec’s men as they stumbled their way along the southern bank of the brook. The firefight that ensued was brisk and confusing. Men engaged in hand-to-hand combat as both French and English were clubbed and tomahawked. Howe was at the head of the 80th Regiment and quickly led the rest of his force to the Connecticut men’s aid. Within minutes Trepezec’s detachment was surrounded by Rogers to the north, Howe to the east, and the other British columns advancing from the south. Howe, on foot and ignoring the pleas from his subordinates, rushed forward into the maelstrom beside another officer from his own 55th Regiment of Foot, Captain Alexander Moneypenny. It was at this moment that a ball struck the general, killing him instantly. “Never a ball had a more deadly effect,” Moneypenny asserted, “It entered his breast on the left side, and (as the surgeons say) pierced his lungs and heart, and shattered his back bone. I was about six yards from him. He fell on his back and never moved, only his hands quivered an instant.”[5]

The Death of Lord Howe at the Battle of Bernetz Brook, July 6, 1758

In less than an hour British victory in this chaotic fight had been secured. Nearly 200 men of the French detachment had been killed, wounded, or captured, including Trepezec, who would later die of his wounds received. Abercromby could count a mere sixteen casualties. One of the ten dead, however, was irreplaceable. George Howe, just thirty-three years old, was an up-and-coming star in His Majesty’s Forces. He was greatly loved by his men and all who knew him or knew of him felt the impact of his death personally. “In Lord Howe,” one British officer penned, “the soul of General Abercromby’s army seemed to expire. From the unhappy moment the General was deprived of his [Howe’s] advice, neither order nor discipline was observed, and a strange kind of infatuation usurped the place of resolution.”[6] Even men not serving with Howe lamented at the news of his demise. James Wolfe, the future “Hero of Quebec,” wrote somberly that his loss was “irreparable, because there is not another soldier [like him] in His Majesty’s service, and I do not at all doubt that in two campaigns, he would have driven the French out of North America.”[7]

George Howe’s body was never sent home to England. The tremendous summer heat made the corpse’s preservation nearly impossible. Instead, he was laid to rest in Albany, New York in St. Peter’s Church where he still remains today. Not long after his death, the Massachusetts Assembly appropriated funds for a memorial to Howe in Westminster Abbey. This was a testament to the admiration the colonists held for the general and their appreciation for his sacrifice made for King and Country and for their security. The base of the monument affectionately reads: “He Lived Respected and Beloved; The Publick Regretted His Loss. To His Family it is Irreparable.” His brothers, Richard and William, were forever grateful for this act of kindness.

Lord Howe’s leadership and understanding of the North American conflict was dearly missed. His death seemingly doomed the campaign to capture Fort Carillon. Just two days after the Battle of Bernetz Brook, James Abercromby attempted to take the French stronghold by sheer weight in numbers, aimlessly throwing wave after wave of British troops against an impregnable line of abatis and enemy earthworks without any artillery support. It was a bloodbath. By the end of the day his army had suffered over 2,000 casualties and was in full retreat back to the southern end of Lake George. The Battle of Carillon was the bloodiest action fought on the North American continent in modern history until the Civil War over a century later. Had George Howe been there, Abercromby may have yielded to his subordinate’s advice or chosen another alternative. Britain’s most embarrassing defeat of the war may have been avoided, and countless lives could have been spared their dismal fate.

This entry was posted in Battles, British Leadership, French and Indian War, Uncategorized. Bookmark the permalink.

3 Responses to “The soul of General Abercromby’s army seemed to expire”: The Death of George Howe, July 6, 1758