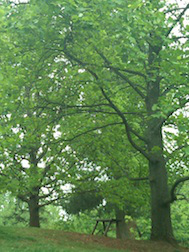 The first in a four-part series

I sit on a small wooden bench, little more than a plank with legs, really, beneath a tulip poplar whose wide branches umbrella me. The grass around the bench has been worn away by weary travelers come to the bench to rest, revealing the reddish iron-rich soil of Virginia beneath.

A few yards away from me, Thomas Jefferson rests in peace.

A slow stream of visitors comes down the brick walkway from Jefferson’s house to stand outside the black, wrought-iron fence that surrounds his family’s small graveyard, still in use today by descendents. Many visitors have thrown coins onto the president’s grave—not just the Jefferson-faced nickels you’d expect, either, but pennies, dimes, and quarters, too. Considering the rift between Washington and Jefferson in Washington’s last years, I wonder what Jefferson would think about that.

I try to come here, to Monticello, at least once a year if my adventures on the road allow it. Architecturally, it’s one of the most marvelous homes ever built, perched atop a mountain whose top was leveled off to accommodate the house and its gardens. Jefferson called the house his “essay in architecture.” 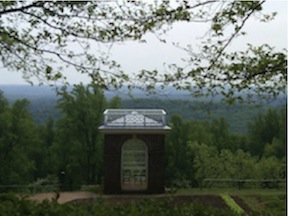 But Monticello, to me, is more fascinating because of its symbolic value.

The property is nothing less than Jefferson’s autobiography because it reflects his interest in not only architecture but gardening, natural science, people, education, agriculture, and exploration. (And don’t get me started on his books—three libraries in all totaling more than 6,200 volumes!)

Because of the slave population that kept the property functional, Jefferson had a small village on top of his mountain that supplied the five-thousand-acre plantation with everything it needed, from furniture to nails.

During his lifetime, Jefferson kept some 600 people in bondage. “We have the wolf by the ears,” he said of slavery; “we can neither hold him or safely let him go.” He called it an “abominable crime.” Yet during his life, Jefferson only freed two slaves; in his will, he freed five others. The rest were sold to pay off the considerable debts he had amassed in his lifetime.

It’s no wonder, then, that I have such mixed feelings about Jefferson—strong mixed feelings about him. He kept slaves yet he abhorred slavery. He was constantly in debt yet he continued to live lavishly. He opposed big government, yet he made the unilateral decision to buy the Louisiana Purchase, doubling the size of the country (a good idea, no doubt, but completely hypocritical on Jefferson’s part). He condemned political parties yet he formed one to oust his friend, John Adams, out of the presidency, allowing partisanship to trump friendship.

In many, many ways, Jefferson was the walking, talking embodiment of contradiction.

Which also makes him the perfect personification of America.

For that reason, Jefferson’s magnetism will always hold sway over me. He will frustrate and anger me, but I will always respect and admire him, too. Part of me resents him for that. (Resents! I’m a forty-year-old man, born almost 150 years after Jefferson died, and yet I still resent him. There’s obviously something wrong with me….)

I’m an Adams man, myself—a fan of the New Englander’s passion, sensibility, powerful intellect, and humanity. Whereas Jefferson is one of history’s “Marble Men,” Adams was much more salt of the earth. Adams knew history would largely forget about him even as it would exalt Jefferson, a thought that rankled Adams badly.

The two friends patched up their differences in an extraordinary correspondence that covered the last years of their lives, and in the greatest coincidence ever, they died on the same day: July 4, 1826, the fiftieth anniversary of the Declaration of Independence, a document both Founders had a key role in shaping. Because they reconciled, I shouldn’t hold a grudge on Adams’s behalf, but I do. 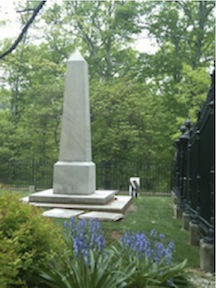 As I sit under the verdant canopy of the tulip poplar, Jefferson’s grave just a few dozen yards away, I think about these things just as I do every time I visit this magnificent place.

I think, too, today about a question recently posed to me by a student: “What is it about history that inspires you to write?”

In other words, Jefferson makes for a good story. As a writer, I love good stories—and history is full of them. They’re stories of real people, just like us, doing real things and overcoming real obstacles.

Some people have a difficult time getting past the stereotype that history is boring because it requires the rote memorization of names, dates, places. I’ve learned differently. Good history, told well, is as captivating as any work of fiction or any multimedia extravaganza. Good history is exciting, compelling, captivating.

That’s why I see my writing as a historian and my work as a journalist as being so closely intermingled. In both cases, I’m telling stories about “what happened.” As a journalist, the story of “what happened” may have happened only yesterday, while as a historian “what happened” may have been 150 years ago—but both forms of storytelling require me to gather facts and get comments from witnesses and sort through information and analyze and organize it. Then I have to figure out the most effective way to tell the story.

Sometimes, I’m lucky enough to be able to sit under the lush canopy of an old tree, spending time with a former president, as I try to figure that out.