Inspired By the Americans

On December 16, 1773, in Boston, Massachusetts harbor, American colonists belonging to the Sons of Liberty stole aboard trade vessels anchored in the water. In protest to recently passed British legislation, the Native American dressed Sons of Liberty dumped 342 chests of tea into the water.

The Boston Tea Party became a prominent and well-known defiant act by the Americans on the road to the American Revolution.

Unbeknownst to the Adams, Warrens, and Hancock’s of the American Revolution, this particular form of protest–attacking the purse strings of the governing power–would resonate 75 years later, 3,284 miles, and one continent away.

In January 1848, in a year that would be defined as the “Year of Revolution,” the liberal leaders of the city of Milan, part of the Hapsburg Empire, sparked their own form of economic protest.

Chafing under the iron thumb of Austrian rule in which they had no voice, the Milanese wanted a constitution, a say in the way they were ruled, and more protected rights.

Like their fellow protesting brethren in Massachusetts the century before, these Milanese liberal instituted one of the first anti-smoking campaigns in the history of Europe.

Health was not the main goal of this protest.

Tobacco was a major commodity and in turn a big money maker for the Austrian-Hapsburg Empire.

Thus, the Milanese completely stopped smoking in the new year.

Unfortunately, with the Austrian garrison troops continuing to smoke and when realizing that the local population was not, the soldiers took advantage of the situation and would become brazenly conspicuous when puffing tobacco.

Exactly what the Milanese wanted.

Sam Adams would have been proud at this sly ingenuity by the Milanese. 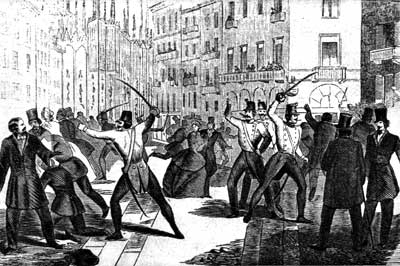 Milanese and Austrians scuffle in Milan, January 1848. (If one looks closely, you can notice cigars in the mouths of the soldiers)