His merits, pedigree, and how he came to America has been questioned and studied by many scholars and historians.

Another German has not fared so well in terms of recognition of his invaluable services to the American cause.

This post is about that other German-speaking military officer. He did something von Steuben did not.

Baron Johann von Robais de Kalb not only offered his services to the fledgling American Continental Army, he also gallantly gave his life for his adopted-cause.

Born June 19, 1721 in Huttendorf, near Erlangen in Bavaria, de Kalb led a life of privilege, learning multiple languages before earning a commission in the French army in the Loewendal Regiment. He served admirably in the War of Austrian Succession and the Seven Years War, in the later, he won the Order of Military Merit and gained his baronetcy.

With the Seven Years War over in 1763, de Kalb resigned his military commission and married Anna van Robias, who was a wealthy heiress to a clothing manufacture.

Yet the military came calling again and in 1768 de Kalb crossed the Atlantic, on behalf of the French, to gauge the current discontent the English-American colonies were exhibiting.

Nine years after making that trek and getting his first inkling of the spirit and demeanor of the American colonists, de Kalb found himself back in the North American colonies. Initially frustrated by his lack of rank in the American army, his good friend, the Marquis de Lafayette intervened and de Kalb was promoted to major general on September 5, 1777.

de Kalb served through the winter at Valley Forge and in 1780 he led some of the best troops in the American army; Delaware and Maryland Continental soldiers south to help reverse the tide of American fortunes.

On August 16, 1780 both forces advanced toward each other as soon as the sun began to peek above the horizon. However, inexperienced militia on the American left flank, broke and ran to the rear, taking (or prompting, depending on what account you believe) Gates with them. The militia from North Carolina, along with the Delaware and Maryland troops tried to stem the tide.

That is until Banastre Tarleton’s cavalry came crashing down into the rear of the American lines. With a rout ensuing, de Kalb tried in vain to rally his men was struck by musket fire.

His horse was also shot out from under him.

When on the ground, de Kalb was bayoneted three times. 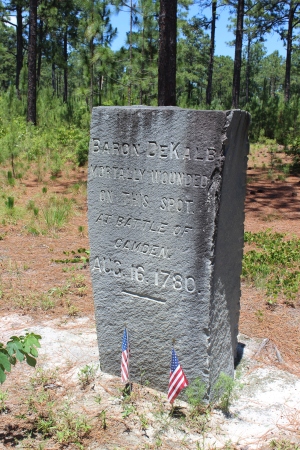 Captured and taken to a field hospital, de Kalb was administered what aid the British could provide under the direct supervision or Lord Charles Cornwallis, the British commander.

“I die the death I always prayed for; the death of a soldier, fighting for the rights of man.”

During his presidency, George Washington made a tour of the Southern states and made a point to stop by the battlefields of the American Revolution.

When he approached Camden he asked to see the grave of the fallen de Kalb.

Washington, when seeing the grave, remarked “There lies the brave de Kalb; the generous stranger; who came from a distant land….to water with his blood the tree of liberty.”

In 1825 de Kalb’s remains were exhumed and reinterred in its present spot; Bethesda Presbyterian Churchyard. Robert Mills, well-known as the architect for the Washington Monument, was responsible for the current monument to the Bavarian.

His fellow European military leader, shipmate on the way to America, and a stalwart friend, de Lafayette laid the cornerstone.

The epitaph ends with “A German by birth, but in principle, a citizen of the world.”

Although lesser known than von Steuben, a fitting testament to the service and ultimate sacrifice that de Kalb gave to his adopted country is reflective in the following honor.

Six counties in the United States are named in his honor, which makes his name in the top five of most popular names for those designations

*The word German is used loosely to represent all Germanic peoples populating the various principalities of the German states, ranging from Prussia to the north-east to Bavaria in the south. German unification did not happen until long after the American Revolution.*

5 Responses to The Other German