ERW Weekender – In the Footsteps of Young George Washington

Recently myself and two other Emerging Rev War authors took a trek to the mountains of western Virginia, Maryland and Pennsylvania to follow in the footsteps of George Washington in 1754-1758.  Washington played a significant role in the beginning of the French and Indian War.  These were the developmental years for Washington, here he learned lessons of leadership, military command and gained the experience that earned him the future Commander in Chief of the Continental Army in 1775.

One of the best ways to follow in the footsteps of Washington during this time period is to   start in Cumberland, MD.  Here, Fort Cumberland served as the stepping off point for many expeditions to the frontier.  Today, the fort is gone but the location is well marked and interpreted.  The City of Cumberland has established a walking trail and outlined the boundaries of the fort.  Also, a restored cabin interprets Washington’s time at Fort Cumberland.  From here, one can easily follow the famous “Braddock Road” by taking Rt. 40 west (the National Road).

A must see site along Braddock’s Road is Fort Necessity National Battlefield Park.  Here the young and inexperienced George Washington found himself in July 1754 surrounded by French and their Native American allies.  As one gazes across the ‘Great Meadows” and see the small fort Washington built, one has to ask themselves “what was HE thinking?!”  The newly built visitor center and museum is excellent and worth the small fee.  The park preserves the site of the July 1754 battle, portions of the original Braddock Road and the early 19th century Mount Washington Tavern (that was built along the old National Road).  Nearby is Braddock’s Grave (buried after the disaster near Fort Pitt where he was mortally wounded).  Further north is Jumonville Glen.  Of all the places I have been, this place represents the most pristine historic spot.  Here in June 1754, Washington started the French and Indian War.  When one views the spot today, it is easy to take yourself back to 1754 and there is a real sense of history here.  Here Washington led his first command, here Washington set the stage that would lead him to command the Continental Army in 1775. 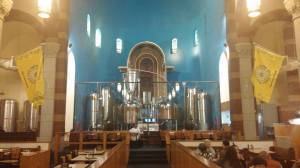 The Fort Pitt Museum, now managed by the Heinz History Center, provides a great timeline and history of the “forks of the Ohio” and also includes a rotating exhibit space.  Since we had followed the route of Braddock all the way from Cumberland, Maryland we decided to visit North Braddock, PA.  Here is where the French and Indians virtually destroyed the British force sent to capture Fort Duquesne under General Edward Braddock (Washington served as one of his aides).  The battlefield is gone today to major development in the early 20th centuries with local steel mills.  Unfortunately for the town, the collapse of the steel industry has left this once thriving town very much depressed.  But, one new bright spot is the Braddock’s Battlefield History Center.   Finally the story of Braddock and the battle along the Monongahela is being told.  The museum is worth a visit and the building is a testament to the efforts of an all volunteer organization led by Robert T. Messner.  While in Pittsburgh, a great place for a bite to eat or drink, a visit to Church Brew Works.  This local brew pub/restaurant is located in a former 1902 Roman Catholic Church.  The food and beer are excellent.

Outline of the French Fort Duquesne, with the Forks of the Ohio in the distance

The Bushy Run Battlefield is a hidden gem near the historic “Forbes Road” (modern day Rt. 30).  This much over looked battle of “Pontiac’s War” between the British and Native American warriors is well preserved and interpreted through great museum exhibits.

Bushy Run Battlefield, where the British made their “Flour Bag Fort” 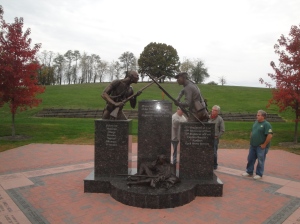 Finally, the highlight of the trip was Fort Ligonier.  I have read about the fort and the historic site, but was pleasantly surprised by what I consider THE best museum on the French and Indian War.  The museum attached to the reconstructed fort has a full exhibit on the history of Fort Ligonier and also a large exhibit on the entire French and Indian War.   Artifacts range from Prussian firearms to Indian chain mail armor (yes, from Delhi, India!).  All nations that fought in this “first” world war are represented.  It is an exhibit that one would not expect at a small historic site.  The reconstructed fort itself is an excellent representation of 18th century fortifications.  The fort is fully interpreted, with all the buildings recreated on their original locations.  If you are within 100 miles of Ligonier, PA…this is a MUST see museum/historic site. 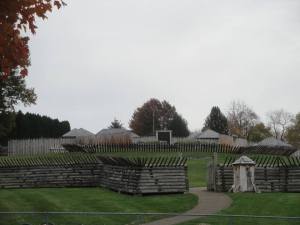 For more information to take your own “French and Indian War Trek”, see the websites below.