“One if by land, two if by sea; and I on the opposite shore will be, ready to ride and spread the alarm through every Middlesex village and farm, for the country folk to be up and to alarm.”  When I was a boy, these words from Henry Wadsworth Longfellow’s poem “The Midnight Ride of Paul Revere” truly stirred within me an excitement that I don’t think has ever really left me.  I hadn’t visited Boston mind you, but I could still envision the outline of that brave horseman as he paced along the shore of the Charles River, “booted and spurred” and wearing his cocked hat and long riding cloak.  He waited and he watched.  He was waiting for the signal in the belfry of the Old North Church that would tell him which direction the Lobsterbacks would be taking that night on their march to Concord. 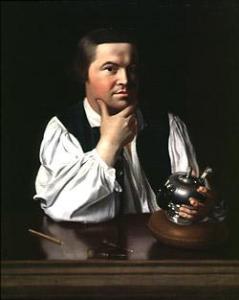 Yes sir, Paul Revere was a hero of mine early on.  Right up there with Daniel Boone and Davy Crockett.  It would be years, though, before I would learn the real story of what happened that night, April 18, 1775.  During my first visit to Boston a few years ago, I crossed the bridge that spans the Charles River, near where the USS Constitution is now moored.  Longfellow’s poem has fooled many since its publication in 1861.  It’s true, Paul Revere, Boston silversmith, member of the Sons of Liberty, and Messenger of the Revolution, crossed the river near that spot.  He met up with local militia leaders on the Charlestown side.  The steeple of Christ Church in Boston’s North End, the Old North Church it was also called, did indeed shine forth with the light of two lanterns, hung there by its young sexton Robert Newman.  It was a message alright but Longfellow got it backwards.  It wasn’t a message to Paul Revere but, rather, it was a message from Paul Revere!

One of the Lanterns

The North End of Boston is still what we would today call a blue collar place.  Its streets are narrow and the buildings are close-packed.  The Paul Revere House, at 19 North Square, is surrounded by modern buildings and businesses.  Didn’t matter to me though as I strolled through the house on a self-guided tour.  I found myself struck as I exited from the back door and walked down the back steps; probably the same exit route taken by Revere himself that night as he left home and headed down to the water to retrieve the small boat he kept hidden there.  Like a lot of historic areas, you sometimes have to use your “mind’s eye” to envision what things were really like.  As I looked around North Square, I envisioned how Mr. Revere’s world would have looked.  At last, on that first trip to Boston, I was following in the footsteps of Paul Revere!

Over on Salem Street stands Christ Church; the Old North Church from history.  The sanctuary is still beautiful.  If it were allowed, I surely would’ve climbed to the top of the steeple as Robert Newman did on April 18th.  Revere and may other members of the Sons of Liberty had already learned, through mysterious sources, of the secret plans of British General Thomas Gage to march a hand-picked force of light infantry troops and a handful of Royal Marines to the village of Concord, some 20 miles west of Boston to seize the colony’s powder stores.   By all accounts, General Gage was a good and virtuous man; a veteran of the fight on Braddock’s Field in 1755.  He arranged his plans to secretly snatch up the colony’s stores of powder and shot in order to help stop any further bloodshed should tensions continue to boil over into violence.  But it was not to be.

Many of the troops who would be making the march later that evening were quartered in buildings near the Old North Church.  In fact, Mr. Newman’s signal lights were actually seen by the regulars.  As an officer banged hard on the wooden doors in the front of the church, wanting to know what was going on; Robert Newman stole silently through a rear window to make his escape.  As he was known to carry about his person a set of keys to the church he would later be arrested and detained.

Back Window of the
Old North Church

By the same token, Revere knew the risks he himself would be taking in having friends row him across the Charles River after the hour when no further civilian traffic was allowed.  They would pass under the guns of the HMS Somerset, the man-of-war that was posted in the river to block all nocturnal travel between Boston and Charlestown.  Hence, the signal.  In case Revere was stopped, he had arranged for Robert Newman to make the signal of two lanterns in the belfry, to communicate to the Patriots in Charlestown that the regulars would be crossing Boston’s Back Bay, near Cambridge, on their march.  “Two if by sea.”

The signal was sent and Revere made it to Charlestown.  He borrowed a horse, Brown Beauty, and galloped off but not to Concord; he was heading for Lexington.  Down to the south, along Boston Neck, passed another rider, by the name of William Dawes.  The mission for both men was the same: reach Lexington in time to warn patriots Sam Adams and John Hancock that the regulars were out!  Both men made it to Lexington, with Revere arriving first.  They delivered their message.

As for Concord, well…that’s another story. 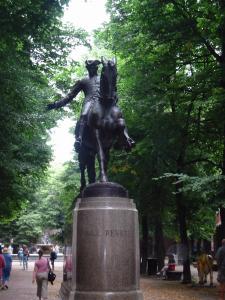 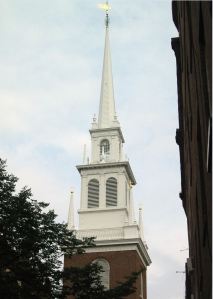 1 Response to The Signal