A review of “The Guns of Independence, The Siege of Yorktown, 1781”

A review of The Guns of Independence, The Siege of Yorktown, 1781. By Jerome A. Greene. Published by Savas Beatie, El Durado Hills, CA., 2013. 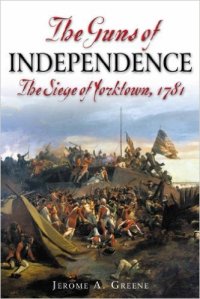 “The Guns of Independence, the Siege of Yorktown, 1781”

Jerome Greene’s, The Guns of Independence, The Siege of Yorktown, 1781 is a must read for serious and avocational students of the American Revolution. At first glance the 15 chapters and five appendices which confront you at the table of contents appear overwhelming but Greene adeptly weaves the reader through the text with ease. Being familiar with the campaign and other texts which cover it, I found it informative, exciting, comprehensive and yet easy to read.

The first four chapters are aimed at contextualizing the events, armies and commanders as they maneuvered towards and subsequently entrenched at the small port town. Chapters five through ten describe the tightening of the siege around the British, German and Loyalist forces at Yorktown and Gloucester Point while reminding readers about the importance of the naval maneuvers which essentially sealed Cornwallis’s fate. The final five chapters detail the demise of the Crown’s forces at Yorktown, the surrender and post-siege environment. Lastly, the events which transpired between the surrender on October 19, 1781 and the ratification of the Treaty of Paris in 1784 are synopsized, providing a sorely needed reminder that the American Revolution did not end at Yorktown.

` Originally conceived as a training manual for the staff at Colonial National Historical Park during the Bicentennial, readers will find a unique and refreshing text.

Every chapter presents a clear and succinct narrative, punctuated by strong, strategically placed primary source material. Several chapters offer an additional peak into topics or details of the campaign which I’ve come to call ‘breakouts’ since they are not only nicely woven into the text but are also formatted in such a way that you can skim, skip or revisit them and not lose the flow or your place in the primary narrative. 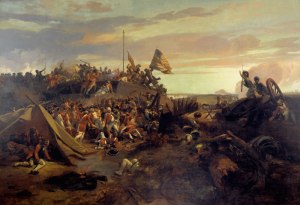 For instance, Chapter 3, The British Positions provides both profile drawings of the original earthworks as well as an explanation of 18th-century fortification terms. This is helpful for the advanced student who is interested in the minutia as well as as handy for the casual reader—a forgotten demographic by most history writers. Perhaps just as exciting is Greene’s continued use of archaeological reports throughout the text. I found his use of this material dovetailed flawlessly with the quotes, orderly book entries and other primary sources providing a more complete, evocative and defensible narrative.

Beside being a strong narrative which allows readers to clearly imagine the events of the Siege, Greene produces several interesting maps which, like the ‘breakouts,’ are helpful to both casual visitors to the Yorktown battlefield and devotees of the campaign. Often times, even the most devoted military historian has a hard time following the battle narrative as officers and battalions maneuver, charge and frequently shift across the historical landscape and subsequently, across your page. The author’s maps, organizational charts, photos (despite being in greyscale) and appendices provided me with clear points of reference in the rare instance when I found myself lost or confused.

Perhaps, most importantly, Jerome has inspired this reader to visit the battlefield again, book in hand, to reimagine the events, people and landscape which is just a few miles from my front door. I know in my household that The Guns of Independence will become one of the frequently referenced, dog-eared, highlighted and abused books on our shelves—a sure sign of success.

Drew lives in Williamsburg with his wife, Kate and their two cats. He enjoys reading but doesn't particularly relish writing. He enjoys oysters, brown spirituous liquors and quiet.
View all posts by Drew Gruber →
This entry was posted in Uncategorized. Bookmark the permalink.

3 Responses to A review of “The Guns of Independence, The Siege of Yorktown, 1781”