236 years ago America suffered its worst defeat of the entire Revolutionary War.  On May 12, 1780, patriot General Benjamin Lincoln surrendered the city of Charleston (then, Charlestown) South Carolina and its garrison of about 6,000 troops to the British army under General Henry Clinton.

The Siege of Charleston.  This image shows a view of the British works and the city of Charleston in the background.

The British had set their sights on the wealthy southern city after taking Savannah in 1778 and successfully defending it against French and American attacks in 1779.  The British expedition against Charleston was a joint effort by the Royal Army and Navy.  General Clinton advanced by land, while Admiral Mariot Arbuthnot blockaded the harbor.  Their combined force had about 13,000 men.  George Washington in New York dispatched the Virginia Continental Line from his army to reinforce the southern army stationed in the city of Charleston.  General Benjamin Lincoln had a difficult choice of whether or not to stay in Charleston (a very difficult location to defend as it was on a peninsula) or evacuate the city and save his 6,000 man army.  The citizens of Charleston stubbornly insisted that Lincoln stay in the city, and Lincoln deferred.

Clinton moved down the peninsula and on April 1 began a classic siege of the city.  Lincoln got good news when on April 7 when the Virginia Continentals reinforced his army after marching nearly 700 miles.  Unfortunately, the noose around Charleston’s neck was just beginning to tighten.  The British dug earthworks inching closer and closer to the town while hundreds of American and British cannon fired at each other for 42 days.  This would end up being the longest siege of the entire war.  During this time there were also numerous infantry attacks and sorties as the Americans desperately tried to break the siege.  On April 24, a select group of Patriots sprang into the British works and bayoneted more than a dozen British soldiers.  During the fighting over the 42 days about 500 American and British troops would be killed and wounded and dozens of Charleston citizens would be killed from the bombardment.

Ultimately, it became impossible to break through or escape.  On May 9th, the British unleashed a massive bombardment.  General William Moultrie remembered it clearly: “There was a tremendous cannonade (180-200 pieces of heavy cannon firing), it was a glorious sight, to see them like meteors crossing each other, and bursting in the air; it appeared as if the stars were tumbling down.  The fire was incessant almost the whole night; cannonballs whizzing and shells hissing continually amongst us; ammunition chests and temporary magazines blowing up, great guns bursting, and wounded men groaning along the lines: it was a dreadful night!”

General William Moultrie.  Moultrie’s brother, Thomas, was killed in the sortie on April 24.

On May 12, 1780 Lincoln formally surrendered his army to Henry Clinton, after what one British officer described as “a gallant defense.”  It was the largest defeat of the war for the Americans and the next time an American force this large surrendered to a foreign army was during World War II at Bataan.  The defeat was humiliating.  The captured Continental soldiers would ultimately be placed on prison ships in Charleston harbor where hundreds more would die of disease and hunger.

General Benjamin Lincoln was exchanged and was with Washington’s army a year and a half later at Yorktown.  When General Cornwallis was forced to surrender his army in the face of American siege works, he refused to attend the surrender ceremony.  His second in command, General Charles O’Hara went to surrender his sword to the French general Rochambeau, who refused it and directed he give it to Washington.  Washington, in turn refused, and directed he give it to none other than Benjamin Lincoln.  The disaster at Charleston had been avenged.  But it would be more than a year after the victory at Yorktown before the city of Charleston would be liberated from British control on December 14, 1782.

Surrender of the British at Yorktown.  General Lincoln is front and center on the white horse.  A similar scene, only reversed, occurred in Charleston in 1780.

This event has been vastly overlooked and little remembered throughout history.  Today the only reminders of this important event are a small piece of the ‘hornwork’ (part of the American defenses) which survived and a state historic marker that was placed six years ago today for the 230th anniversary of the surrender.  Most of the hallowed ground that made up the deadly no-mans-land and the locations of the American and British earthworks are now under the trendy upper King Street area in the city of Charleston.  There was no attempt to save this battlefield land after the war.  This exemplifies the importance preservation of battlefield land has on how we remember our history.  Next time you visit Charleston, remember the significant sacrifices made in 1780 in that part of the city, even with no battlefield set aside to honor those men who fought.  The events that occurred there showed just how close America came to defeat as late as 1780 and gives more luster to the names of the men who in the face of such daunting challenges and defeats fought, died, persevered and were eventually victorious. 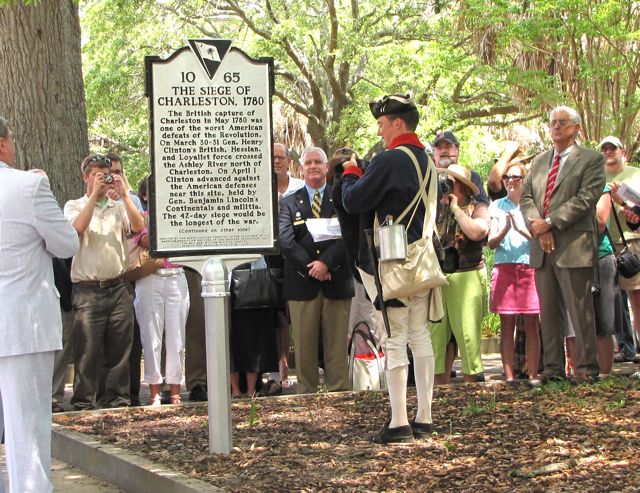 Dedication of a marker on the site of the American surrender in 2010.

1 Response to “A Gallant Defense”