December 23, 1783: “More Extraordinary Than Any Military Feat During the War”

In Baltimore, Maryland stands one of the first monuments erected to the memory of George Washington. The 180-foot monument was finished in 1829, before the Washington Monument in D.C. was even begun. The impressive stone pillar is topped with a large statue of the General. Unlike most other statues of George Washington, the statue in Baltimore does not depict the Revolutionary War hero on horseback with his sword drawn, or as the First President of the United States. Instead it shows Washington, in his military uniform, simply extending a hand holding a piece of paper. Despite the simplicity of the scene, it is representative of one of the most important moments in the founding of the American nation: Washington resigning his military commission.

The Baltimore Washington Monument. Emblazoned on the sides are important dates in the Revolutionary War, including December 23, 1783. At the top, Washington resigns his commission.

On November 1, 1783, Washington learned that the Treaty of Paris had been signed and the Revolutionary War was over. On December 4, Washington bid an affectionate farewell at Fraunces Tavern in New York City to his officers and aides he had struggled and fought alongside for the previous eight years.

After the emotional farewell, Washington rode to Annapolis, Maryland where Congress was meeting at that time. He arrived at Annapolis on December 19 and was greeted as a hero. Congress agreed to accept his resignation on December 23, in a special ceremony.

The night before the ceremony, the town threw a celebratory ball for the General, complete with a dinner and dancing as well as thirteen cannon firings and thirteen toasts.

This famous painting of Washington Resigning his Commission by John Trumbull is on display in the United States Capitol Rotunda. The empty chair covered in robes is an allegorical depiction of the throne Washington was rejecting through the act of resigning.

At about noon on December 23, 1783, George Washington entered the Old Senate Chamber in the Maryland State House. The importance of the moment was not lost on those who witnessed it, least of all, Washington himself. Washington is likely the only American who could have been made a king in America. In fact, in 1782, Colonel Lewis Nicola wrote a letter to Washington, suggesting that he should be king of America. Washington, quickly and emphatically crushed any notion of establishing a monarchy. More than a great general or leader, Washington believed in the ideals of American liberty and civilian rule.

In London, King George III remarked that if Washington gave up his power “he will be the greatest man in the world.”[1] Only a few times in human history before had a person at their zenith voluntarily surrendered all their power. Julius Cesar, William Cromwell, and Napoleon Bonaparte are prime examples of those who seized power at that same moment. Few men have been able to resist and became drunk with power. Washington was one of the few exceptions. One of the only precedents of rejecting the allure of that amount of power was in ancient Rome, when Cincinnatus gave up power after winning a war to become a simple farmer. Washington was about to become the American Cincinnatus. 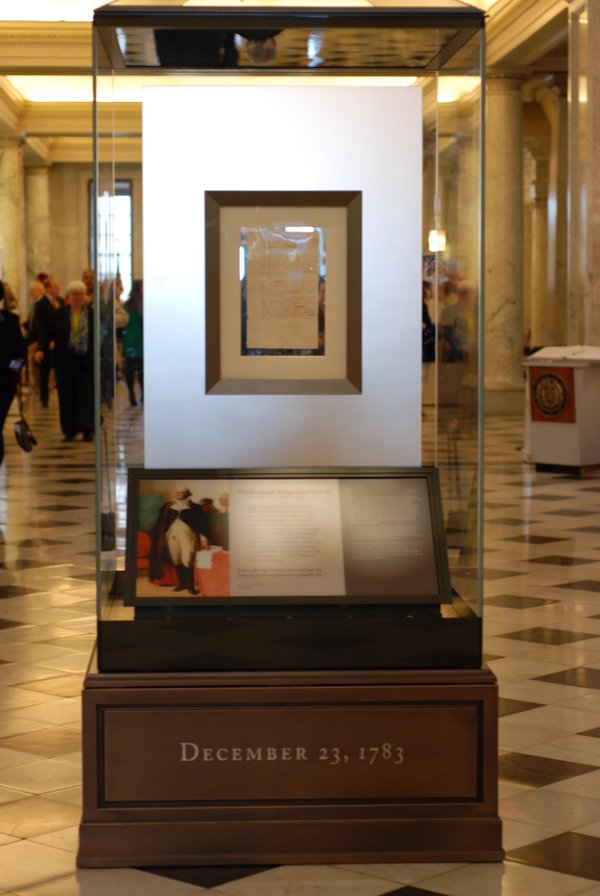 Washington’s copy of his remarks delivered during his resignation on display in the Maryland State House.

Inside the chamber, Washington stood before the Continental Congress and its president, Thomas Mifflin, and read his concluding remarks. At one point, the power of the moment overtook Washington as he struggled through with a cracked voice the last few lines of his remarks. Washington finished his remarks: “Having now finished the work assigned me, I retire from the great theater of action; and bidding an affectionate farewell to this august body under whose orders I have so long acted, I here offer my commission and take my leave of all the employments of public life.”[2]

Those inside the chamber were overtaken with emotion and wept in the galleries. Concluding his remarks, Washington handed over to the Congress his commission dated June 15, 1775 and his remarks and left the building. And like that, Washington was once again a simple private citizen.

The Old Senate Chamber in the Maryland State House as it looks today. The room was just recently restored to the way it looked in 1783.

He rode from Annapolis and made it back to Mount Vernon the next day on Christmas Eve. It was the first time he had been home for Christmas since the beginning of the war. He could enjoy that Christmas with his family, but world history would never be the same again.

Today you can visit the location where this momentous event took place and see Washington’s hand written remarks on display at the Maryland State House in Annapolis. While the date of December 23, 1783 does not usually bring to mind a historic event, historian Ron Chernow described the event as “more extraordinary than any military feat during the war.”[3]

Washington would again be called back reluctantly to lead the nation as its first president in 1789. After serving two terms as president, Washington once again voluntarily gave up power in 1797. His disinterestedness in control and power set a precedence many have sought to emulate, and few have attained.