Leading up to the anniversary of April 19, 1775, we will be sharing some short remembrances from a few people who are from Lexington and Concord. This installment is by Rich Gillespie, a native of Lexington, Massachusetts.

If you live in Lexington, Massachusetts, the beginning of the American Revolution is an essential piece of life. The Minuteman statue dominates the center of town, the village green where the Alarm List stood to face the Regulars is much as it once was, the Town Seal seen on your friendly snowplow quotes Sam Adams’ comment to John Hancock upon hearing the firing—“Oh, What a glorious morning for America!”, and the high school’s team is predictably the Minutemen.  The British marched to and from Concord within 150 yards of my 4th grade classroom, and the spring field trip was to the key sites of Lexington and Concord.  My first job (as was my sister’s) was guiding visitors on Lexington Green. 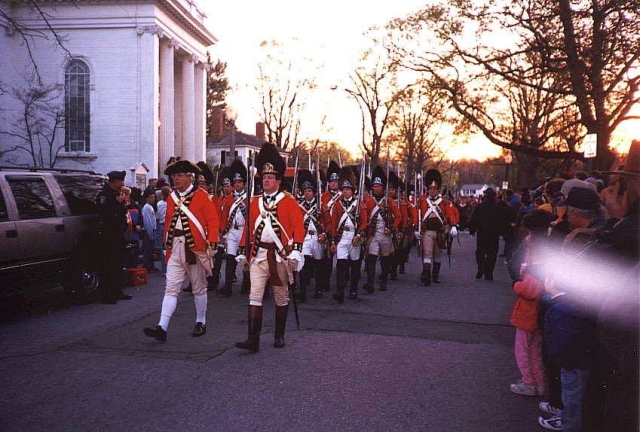 In Lexington, April 19th was long like the 4th of July.   It is now “Patriot’s Day” that is celebrated on the Monday closest to the 19th), but Lexingtonians still speak of the “19th of April” and are heavily involved in the commemoration/celebration.  Patriot’s Day sees a dawn re-enactment at Lexington Green—this year at 5:30 a.m.—and the Regulars are as distasteful as ever, haughtily winning each year and marching off towards Concord with their triumphant Huzzahs!   Commemorations continue seven miles west at Concord’s North Bridge. 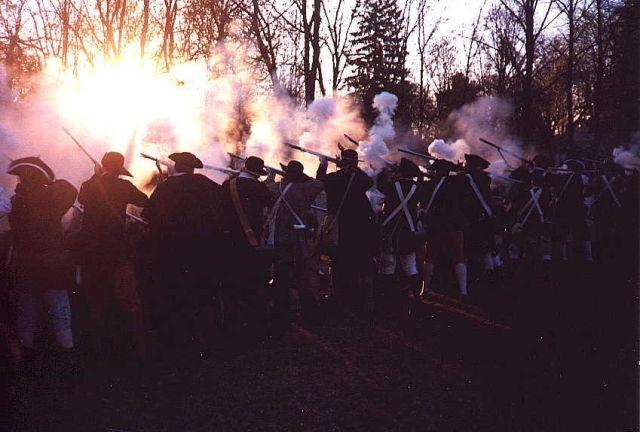 Minutemen fired till late in the day of April 19th

For the locals, parades are the thing. Three parades, two towns.  At Lexington, the parade has traditionally been at 7:30 a.m. and is just for Lexingtonians—Cub Scouts, Girl Scouts, Boy Scouts, the High School Band, the local Selectmen, the Lexington Minutemen, historic town vehicles, and more.  It is a mile-long parade often in cold air or snow.  As a marching 9-year-old Cub Scout, I was awed by a Model T Ford in the parade, and paying no attention, promptly strayed from the line and marched right into a Buick—with fins.  By the time of Boy Scouts, it was time to sell balloons by the dozen after the parade in a carnival-like atmosphere.  In High School, marching in the band’s front rank–a phalanx of trombones-it was time to retire to prepare for the afternoon parade, a two-and-a-half-mile trek that brought in units from all over New England.  Marching promptly at 2:00 p.m. in the front rank through crowds three to ten deep for miles with horn held high playing The National Emblem March was always, always a thrill. 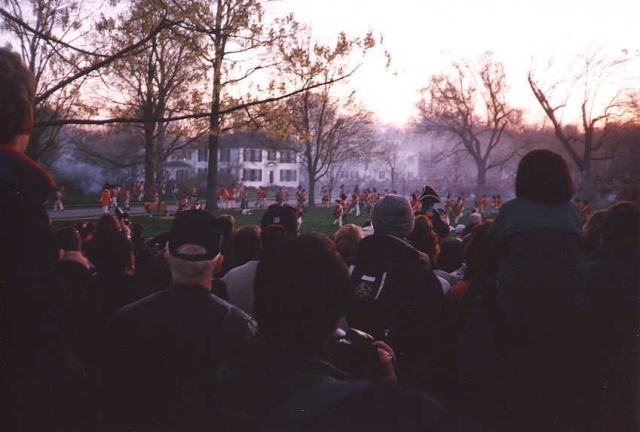 While family still lives in both Lexington and Concord, my last visit for Patriot’s Day came in 2000 for the 225th anniversary.  I saw a Virginia acquaintance there in the crowd—Bill Barker, Colonial Williamsburg’s talented Thomas Jefferson.  But in the several-day observance, it was the sunrise firing of volleys over the original burying place of those slain on Lexington Green that hit me.  As early morning rays filtered down through the hanging black powder smoke, the words of the former minister of my church, the Minuteman Chaplain Rev. Jonas Clarke, came to me.  “They nobly dar’d to be free!”

We shan’t forget the risk and sacrifice of this earlier generation.

*Rich Gillespie is a 3-year veteran history teacher at Loudoun Valley High School in Purcellville, Virginia, he retired to pursue a second career in museum education. Rich served as the Executive Director of  the Mosby Heritage Area Association in 2015 and has been Historian Emeritus since January 1, 2017. Rich has expanded his classroom programs, now reaching 5,000 students a year, written four Scavenger Hunts and Driving Tours, as well as providing expertise for MHAA programs. He also created the very popular “Cavaliers, Courage, & Cofeee” program. Rich is native of Lexington, MA