Review: Unshackling America How the War of 1812 Truly Ended the American Revolution by Willard Sterne Randall

The post-colonial era conflict between the United States and Great Britain, known in America as the War of 1812, has often been described as America’s second war for independence.  In UNSHACKLING AMERICA: HOW THE WAR OF 1812 TRULY ENDED THE AMERICAN REVOLUTION, published by St. Martin’s Press 2017, author Willard Sterne Randall promotes the idea that this war, largely unremembered today in Great Britain, was actually a continuation of the earlier American Revolution. 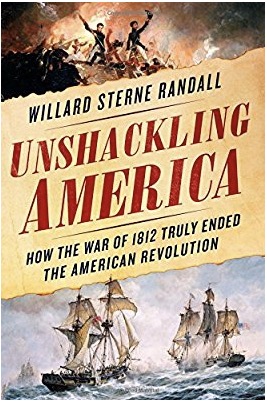 The book begins by chronicling the relationship between America and Britain from the years of the French and Indian War or Seven Years War to the end of the American Revolution and beyond. While the Treaty of Paris in 1783 basically ended the overt military conflict between the former colonies and the mother country, Randall maintains that, in the years that followed, Britain continued to deny economic independence to the United States through regulations on trade, thereby denying full independence to the young nation.

Although the fighting was over, for decades Britain continued to control American trade waters. During these years as well, Britain continued to deny American settlers easy access to certain lands and entry into the vast fur trade.  In order to further control the frontier and western markets, the British violated treaty articles by continuing to occupy fortifications in specified American territories and arming the Native Americans.

In the latter part of the 18th century and into the 19th, the United States created a very large merchant fleet which slowly began to absorb the French Caribbean trade.  No longer under the protection of the Royal Navy however, American merchant ships began to fall prey to the Barbary Coast pirates.  Not wishing to continue paying tribute, in 1794 Congress authorized a United States Navy to combat Algerian attacks.  A total of six frigates, mounting from between 38 to 44 guns, were built.  Though successful in ending the threat from the pirates, the fledgling US Navy was still no match for the powerful European fleets.

With the turn of the century came new conflict between the old world rivals, England and France.  A global war erupted with England battling the forces of Napoleon in Europe while America chose to remain neutral.  The US would find itself trying to walk a diplomatic tight rope between the two super powers.  France, expecting aid from its old ally, would turn belligerent when that aid did not materialize.  Still seeking to control American trade and shipping, Britain began seizing American merchant ships, suspecting they carried material for France.   The British, believing also that American ships harbored deserters from His Majesty’s Royal Navy or at least claiming such, began impressing American seaman.

Ironically, the causes of the War of 1812, specifically British trade embargoes and the impressment of American seaman, ended before the actual start of the shooting war.  With the defeat of Napoleon, there was no longer an argument to be made by the British regarding American collaboration with the French or a need for sailors in the British fleet.  War began, however, though neither side was prepared for the conflict.  American military leaders would prove, initially, woefully outmatched.  American successes on the battlefield would come but anti-war feelings in the north would fail to unite America’s will to fight.  Randall maintains that American sentiment toward the war would not change until the burning of Washington City by the British in 1814.

This is a well-researched work that chronicles the decades-long struggle for economic sovereignty by the young United States and at last, complete independence from Great Britain, achieved long after the guns fell silent at Yorktown.

This entry was posted in Book Review. Bookmark the permalink.