In 1940, during World War II, the British and French armies were completely surrounded by the Nazis at Dunkirk.  The Allies made a successful evacuation, lived on to fight another day, and gained a newfound resolve to resist the Nazi war machine.  The uncertainty and suspense of the evacuation at Dunkirk has recently been brought to life on the big screen with Christopher Nolan’s movie, “Dunkirk.”  As people pack the theaters this summer to see the film, it’s good to remember that America had its own desperate, nation-saving evacuation during the Revolutionary War. 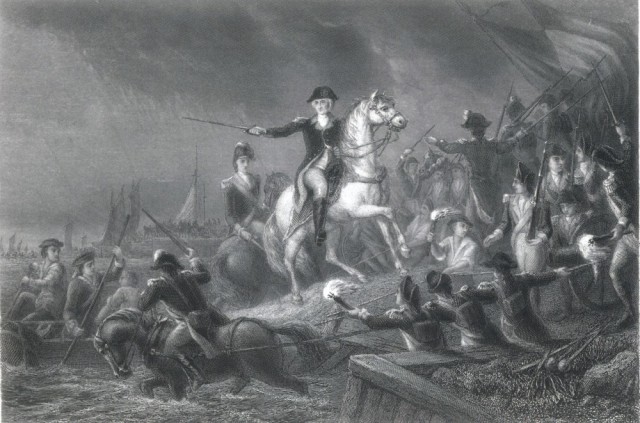 In one of the most daring maneuvers of the Revolutionary War, Washington led his men on a daring night time retreat across the East River. (Library of Congress)

In the summer of 1776, Great Britain dispatched the largest expeditionary force it had had ever sent anywhere in the world up to that point in history.  The British soldiers and sailors made their way into New York harbor to subdue the American rebels.

George Washington, as he looked during the Battle of Long Island in 1776. (Wikimedia)

Washington had divided his army, with half of it on Manhattan Island and the other half on Long Island near modern day Brooklyn.  In the early morning hours of August 27, 1776, the British Army under Gen. William Howe marched up around and attacked the left flank of Washington’s army on Long Island.  Furious fighting occurred all day, especially in the areas in and around Brooklyn known today as Green-Wood Cemetery, Prospect Park, Park Slope and Gowanus.  Late in the day, thanks in part to some sacrificial charges made by Maryland Continentals, the battered remnants of Washington’s army were able to fall back to Brooklyn Heights.

British map of the Battle of Long Island. (Wikimedia)

On August 28, Washington found himself in a very tenuous situation.  The previous day, more than 1,000 of his men had been killed, wounded, or captured.  Half of his army was in Manhattan across the East River and his 9,000 remaining soldiers in Brooklyn Heights were pinned with the river at their back.  Howe’s more than 20,000 men looked to destroy Washington’s vulnerable men.  Howe’s men began digging siege lines around the hemmed in rebels as the British navy looked to sail up the East River and cut them off entirely from Manhattan.  Things looked bleak for the American cause.

William Howe could have likely ended the Revolutionary War in August of 1776, had he acted quicker. (New York Public Library)

Then, as many believed, ‘Divine Providence’ stepped in.  A Nor’easter blew in and prevented the British navy from sailing up the East River.  Washington, though, was still undecided as to what to do next.  On August 29, at a war council, Washington and his generals decided they needed to evacuate Brooklyn and unite the American Army.  The task would be near impossible: evacuate an entire army in the face of a larger force across a wide river, in the middle of the night.  At this point, however, Washington was out of other options.

Starting at seven o’clock in the evening they began ferrying troops across the East River.  The nor’easter wind died down and made it easier for the troops to get in small boats at Brooklyn ferry and cross the river.  Aided in a large measure by Col. John Glover’s Marbleheaders, the exhausted American troops were ferried across to Manhattan.

American soldiers move artillery to the boats to evacuate Brooklyn in 1776. (Wikimedia)

The entire operation was very dangerous.  Were the British to discover that the enemy was crossing the river, they could attack and catch the Americans off guard.  Major Benjamin Tallmadge in the Continental Army summed up the situation succinctly: “To move so large a body of troops, with all their necessary appendages, across a river a full mile wide, with a rapid current, in the face of a victorious well disciplined army nearly three times as numerous as his own, and a fleet capable of stopping the navigation so that not one boat could have passed over, seemed to present most formidable obstacles.”

The author on the Brooklyn side of the East River, next to the Brooklyn Bridge, where the Continental Army evacuated to Manhattan. (Author’s photo)

The American Army worked furiously to get everyone across before daylight would alert the British.  However, as the sun began to rise on August 30, a heavy fog descended on Brooklyn concealing Washington’s troops.  The fog hung around for just enough time that the rear guard of Washington’s men were able to get in boats leave Brooklyn.  Washington was one of the last to leave.  As the final boats departed Brooklyn, the fog lifted and within a matter of minutes, British troops advanced into the now deserted American lines.  Washington, against all odds, had done it.  He saved 9,000 soldiers who would prove to be indispensable in the upcoming campaigns.

Hundreds of years later, Washington’s evacuation of Brooklyn was celebrated as one of the most masterful strokes of the war, despite it being a retreat. (Wikimedia)

Similar to Dunkirk, the retreat took on a heroic nature.  It is possible that had the British destroyed this portion of the American Army (and possibly captured Washington himself) the war may have been over in 1776.  Instead, the war continued and would eventually be won, as the new American nation threw off the shackles of the old world.  Ironically, 160 years later, in the aftermath of Dunkirk, it was the same British Empire that prayed “the New World, with all its power and might, steps forth to the rescue and the liberation of the old.”