Is the Mercer Legacy Secure?

In one of the songs of the Broadway hit Hamilton, the character of Aaron Burr says: “Did ya hear the news about good old General Mercer? You know Clermont Street? They renamed it after him. The Mercer legacy is secure.”

The line is referring to Mercer Street in lower Manhattan.  Ironically, while they mention in the musical that the renaming of this street secures Mercer’s legacy, many Americans probably have never heard of General Mercer, nor do they know what his true legacy was.

A drawing study John Trumbull did of Hugh Mercer for his painting of the Battle of Princeton.  He likely used Mercer’s son as a stand in. (Wikimedia Commons)

Hugh Mercer was regarded as one of the greatest American heroes of the Revolutionary War, at least by his contemporaries.  Interestingly, though, Mercer was born in Great Britain, (Scotland to be exact) and studied at the University of Aberdeen to be a medical doctor.  After graduating, he joined the Bonnie Prince Charlie’s army as an assistant surgeon and witnessed the bloody destruction of that army on the fields of Culloden in 1746.  The young 20 year old became a fugitive in his own land.

The Battle of Culloden decimated the Jacobite forces in April of 1746.  The suicidal battle followed an aborted night attack that could have possibly resulted in a Jacobite victory. (Wikimedia Commons)

Escaping to the American colonies, he settled in Pennsylvania, before joining the colonial militia there and fighting in the French and Indian War.  During that war, he befriended many colonials, including George Washington.  In 1760, he moved to Fredericksburg, Virginia to set up a medical practice, including an apothecary (the shop which still exists today).  One of his patients was Mary, the mother of George Washington.  He became a prominent figure in the Fredericksburg community, joined the local Masonic lodge, married and had five children.

When the war clouds appeared on the horizon, Mercer found himself in another rebellion and quickly became an active supporter of American independence. In early 1776 he was appointed the colonel of the 3rd Virginia Regiment, and by June he was appointed as a Brigadier General by the Continental Congress.

As Mercer joined the Continental Army under Washington’s command, the American army began to suffer numerous defeats around New York that nearly destroyed the entire army.  Mercer went along with the despondent Continental Army across New Jersey and into Pennsylvania, in what must have been reminiscent of the Bonnie Prince Charlie’s doomed campaign.

However, Mercer was fortunate to be with Washington and his small band of men when they engaged in one of the major turning points of the Revolution.   Mercer commanded a brigade of New England and Maryland troops that the crossed the Delaware River and attacked the Hessian outpost at Trenton, New Jersey on the day after Christmas in 1776.  After this electric victory, Mercer’s brigade was rearranged so that he was commanding Marylanders, Pennsylvanians, Delawareans, and Virginians.  His brigade was successful in repelling repeated British charges during the Battle of Assunpink Creek on January 2, 1777.  That evening Mercer and his men engaged in one of greatest military feats of the Revolution when the Continental Army secretly marched around the flank of the British Army and attacked the British rearguard at Princeton, New Jersey.

General Mercer took part in the famous crossing of the Delaware River on Christmas, 1776. (Metropolitan Museum of Art)

That early morning on January 3, 1777, General Mercer led his small 300 man brigade across the frozen fields of William Clarke’s farm south of Princeton.  His men fired some of the first shots that opened the battle against the 17th Regiment of Foot.  During the fighting, Mercer’s horse was wounded, so he stood with his men on foot as the fighting intensified.  He encouraged his men as musket balls whizzed through the American ranks.  The Americans poured destructive fire into the redcoats, killing some of their officers.  At the same time, many of Mercer’s men, and some of his best officers were killed, including Major John Fleming of Virginia.

Finally, the British surged forth with a bayonet charge that ultimately broke Mercer’s line.  Every man soon was for himself as the Americans streamed to the rear in chaos and confusion.  Mercer drew his sword and prepared to fight to the death.  He was quickly surrounded by soldiers from the 17th who immediately demanded he surrender.  “Surrender you damn rebel,” the British soldiers yelled.  They may have even believed that Mercer was instead George Washington.  Mercer, though, refused to surrender and lunged toward the bayonet wielding British with his sword.  His sword was knocked from his hands and the British clubbed him in the head and bayoneted him seven times.  He was left for dead on the field as the battle continued.  Washington eventually rallied his men and led a counterattack that drove the British from field and helped secure a decisive American victory in one of the most important military campaigns of the war. 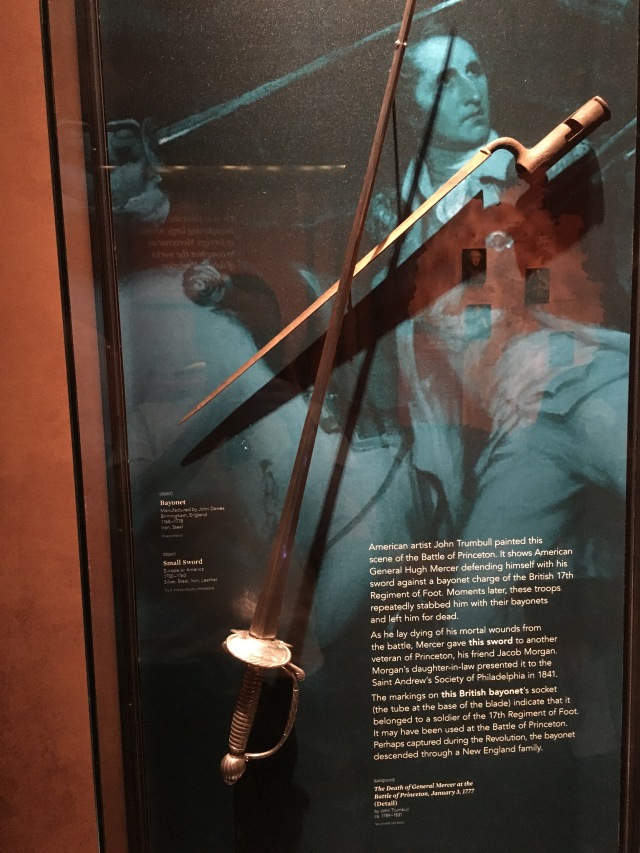 Mercer’s sword is now on display at the new Museum of the American Revolution in Philadelphia along with a bayonet used by a soldier in the 17th Regiment of Foot. (Author’s Photo)

Mercer, still alive, but bleeding profusely, was carried from the field and taken to the nearby Thomas Clarke house.  Along the way he tried to cheer up his men declaring, “Cheer up my boys, the day is ours!”  Washington was saddened to hear of Mercer’s wounding but hoped he would recover.  He left Mercer in the care of Dr. Benjamin Rush and his nephew (and a fellow Fredericksburg, Virginian), Captain George Lewis.  Mercer languished in agony for the next week in Thomas Clarke’s home.  Rush had been optimistic that Mercer would survive, but Mercer (himself a medical doctor), had pointed out to Rush that a bayonet wound under his right arm would ultimately prove fatal.  Mercer was right.  On January 12, 1777, Hugh Mercer died in the arms of George Lewis. 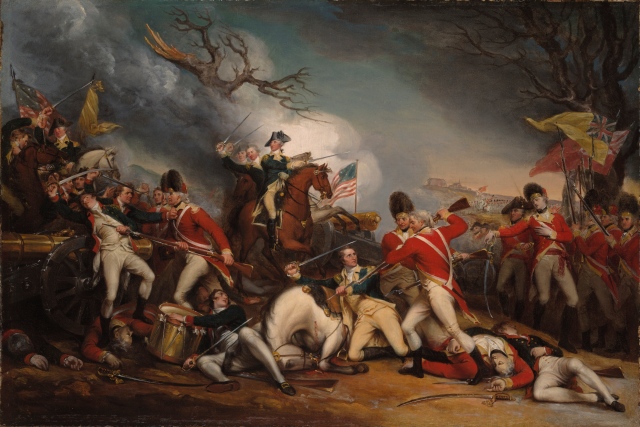 John Trumbull created this painting entitled The Death of General Mercer at the Battle of Princeton, January 3, 1777.  You can see Mercer lying next to his horse being bayoneted by British soldiers.  Behind him, General Washington rallies the troops. (Yale University Art Gallery)

The patriots were stunned, saddened, and angry about Mercer’s death.  His body was placed on display in the City Tavern in Philadelphia and then buried in the churchyard of Christ Church.  Many papers recounted the barbarity of his receiving numerous bayonet wounds.  He immediately became a martyr to the cause, and was enshrined alongside other high ranking casualties like Richard Montgomery and Jospeh Warren in tributes and paintings of the period.

This 19th century print depicts the bayoneting of Mercer.  In the background you can see the Thomas Clarke House, which can be visited today. (New York Public Library)

As for Mercer’s family in Fredericksburg, his widow and five children were taken in by Mercer’s brother-in-law and fellow soldier, George Weedon.  His children would grow up in Weedon’s Fredericksburg home, known as “the Sentry Box.”  One of his daughters ended up marrying a man named Robert Patton.  Patton had two grandchildren who served as colonels in the Confederate Army who also died in battle, Waller T. Patton and George S. Patton.  The latter was the great grandfather of the World War II general of the same name.  A true legacy of military service stretching from Culloden to Bastogne.

Today, Mercer has towns, counties, schools and streets named after him.  In his adopted hometown of Fredericksburg, his apothecary shop interprets his life and a statue stands in the city dedicated to him.  There are plaques and markers about him throughout the country and even in his native Scotland.  Hopefully, more Americans will look deeper into the life of this man and his service to the nation.  Only then, will his legacy be secured.

To learn more about Hugh Mercer, I highly recommend you read Second to No Man but the Commander in Chief, Hugh Mercer: American Patriot by Mike Cecere.  To learn more about the military actions around Trenton and Princeton and the death of Mercer, you can read my recently published book entitled Victory or Death, The Battles of Trenton and Princeton, part of the new Emerging Revolutionary War Series.  You can also learn more if you live near Fredericksburg, Virginia, as I will be doing a talk and book signing at Mercer’s hometown of Fredericksburg for the Fredericksburg American Revolution Round Table this coming Tuesday evening at 6:30 p.m. 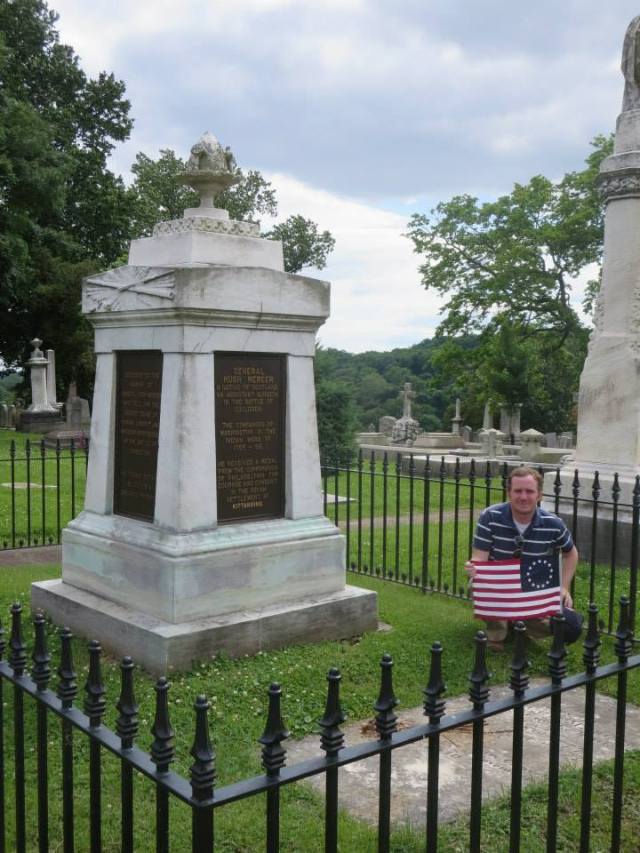 The author at Mercer’s grave.  Mercer’s body was moved in 1840 from Christ Church to Laurel Hill Cemetery in Philadelphia.  (Author’s Photo)

3 Responses to Is the Mercer Legacy Secure?