Uncovering the Continental Army in Morristown

Part of an ongoing series about the Continental Army in Morristown, New Jersey. To read previous posts, click here.

All that remains is a historical marker, on the side of North Park Place across the street from Morristown Green. For a few months, between January 1777 and May 1777, in this location, the headquarters of the Continental Army was located. Within that headquarters, obviously, was George Washington. 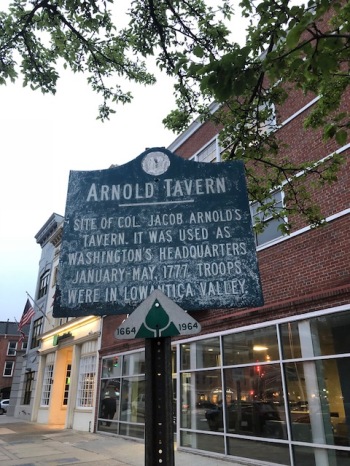 Although no specific date of construction exists, it is believed that Arnold’s Tavern was built by Samuel Arnold between 1735 and 1750. By the time of the American Revolution owned by the son, Colonel Jacob Arnold. The structure was three stories high, with a wide hallway that bisected the building, a front and back parlor, barroom, dining room, and kitchen.

Guests could traverse a winding stairwell to access the second floor and Washington was noted to have slept on the this floor, in a room over the barroom and referred to as the “frontroom” with the adjoining room, accessed through the back of his sleeping quarters, reserved as his dressing room.

Situated over the dining room and kitchen was the ballroom and the local Masonic lodge held its meetings there during the time Washington used it as a headquarters. The tavern remained standing until 1886 when it was purchased by a Mrs. Julia Keese Collis, as a “genuine Revolutionary relic.” The building was dismantled and moved for its own preservation and now much changed, unfortunately, is part of the main portion of All Souls’ Hospital. 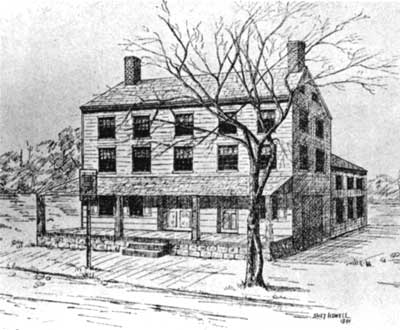 In the rooms of this tavern, Washington, his staff, and fellow officers planned the operations that would ensure the war would continue toward a successful conclusion. Another reason why Morristown was where “America survived.”

“History of “The Arnold Tavern,” Morristown, N.J.: and many incidents connected with George Washington’s stay in this place, as his headquarters in winter of 1777: with views of historic buildings and places of Revolutionary interest.” By Philip H. Hoffman, 1903