Origins of a Revolutionary Orator

Nestled in Hanover County, VA, near where modern residential communities meet farm fields that have been worked for centuries, is the site of a colonial-era plantation home called Studley.  It was here on this site that Patrick Henry, the “Voice of the Revolution”, was born.

A 600-acre tobacco plantation, Studley was built in the 1720’s for its original owner, Colonel John Syme and his bride, Sarah, the former Sarah Winston.  The surrounding community, as it does today, took its name from the site. (By the mid-19th century, the Studley area was called Haws Shop, after a nearby blacksmith shop.  In the latter part of May, 1864, Union and Confederate cavalry units fought a dismounted action here just prior to the battle of Cold Harbor.  Prominent among the Union commanders engaged was Brig. Gen. George Armstrong Custer.)

In 1731, Sarah Syme became a widow; she remarried shortly thereafter.  Her new husband was a Scottish immigrant named John Henry.  The couple’s second child, a boy they named Patrick after an uncle on his father’s side, was born May 29, 1736.  As a boy, Patrick Henry attended a local school but also received “classical” instruction at home, from his father.

Mainly through the work of Studley’s enslaved population, both John Henry and his predecessor, John Syme, raised tobacco on the plantation and exported it to English markets.  The partially cured tobacco leaves were packed tightly in large hogsheads and shipped from nearby Page’s Warehouse (later Hanovertown) on the Pamunkey River.  Today, at roughly 10 miles from present-day Richmond, the Studley home site is considered rather out-of-the-way in rural Hanover County, but during its days as a tobacco producer, its location, so near the Pamunkey, was considered a prime spot for export.

The main house was lost to fire in 1807.  According to archeological investigation and insurance documents dating from 1796, from the Mutual Insurance Society, Studley was a two-story brick and wood home, measuring approximately 40 feet by 30 feet, “…to which was attached a one story high wing extension, also constructed of brick.”  Insurance documents describe, as well, several wooden dependencies located near the house, such as a kitchen, dairy, and granary.   Stables and barn were located several yards away from the main dwelling.  According to a report of the National Register of Historic Places, the foundation of the house was first discovered in 1936 during the bicentennial of Patrick Henry’s birth.  More recently, an archeological survey, prepared by the Virginia Research Center for Archeology, located the walls of a brick cellar measuring 38 feet by 10 feet “in a dense concentration of eighteenth century cultural material in a plowed field.”  According to the survey, “The artifact scatter field which surrounds the cellar site consists entirely of ceramics dating to the eighteenth century.  Fragments of white salt-glazed stoneware, including a chamber pot, plate base, bowl base and plate rim in the Barley pattern, were found in the plowed field immediately surrounding the cellar site.  The presence of an elaborately decorated Rhenish stoneware tankard and plate rim of Chinese porcelain suggests that the owners were persons of upper economic level…”.

View of the Dig Site, where the house once stood

Today, the Studley house site is privately- owned.  It sits alone, in an empty field; the remains of the foundation and dig site engulfed by a clump of small trees and undergrowth.  The site can be viewed from a nearby residential road, however.  An historical marker has been erected along the roadside.

Patrick Henry left Studley at a young age, marrying Sarah Shelton of nearby Rural Plains Plantation, in 1754.  Sarah Shelton’s father gave the couple 300 acres of land not far from his home, called Pine Slash Farm.  He gave them slaves to work it, as well, but the land was poor and overworked by the time the couple took up residence there.  The main house burned in the late 1750’s and, for a time, Henry and his family lived in a small cabin on the property, known locally today as the Honeymoon Cottage.

Patrick Henry’s early adult life would be one that was marked by failure, first as a shopkeeper and then as a farmer.  But he was a boy of Hanover County and it was from here that, soon, his star would begin to rise. 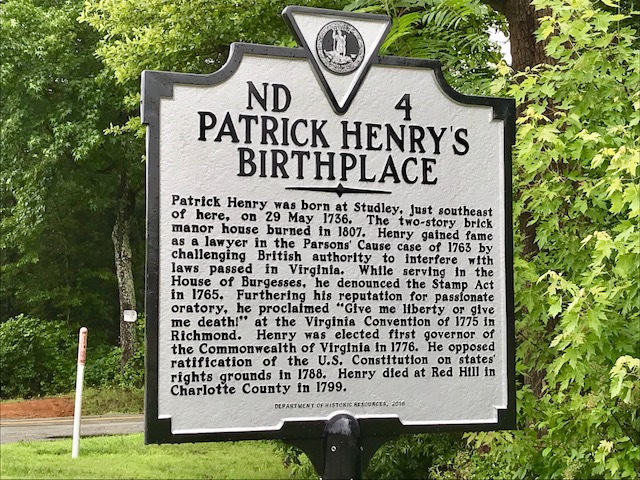