A new park and museum for Great Bridge

Most of us who study the Revolution know of the battle of Great Bridge, fought December 9, 1775. While short and small, it was extremely significant, resulting in British evacuation of Virginia and allowing the colony to move forward with independence and unhindered support of the war effort.

Until recently, the site of this important local landmark, and significant battle, were unpreserved. Nearby, thousands of vehicles drive on the Chesapeake Expressway, largely unaware that they are whizzing past the site of a significant Revolutionary War site. Area preservationists intend to change that.

Local citizens began the effort in 1999. Realizing that the site was unmarked, residents of Chesapeake began working with the city and the Army Corps of Engineers. The result was the Great Bridge Battlefield and Waterways History Foundation.

Thus far they have created a public park with an interpretive trail, historic markers, monuments, and are building a museum/visitor center on the site. Future plans include another monument and interpretive signage and public access at the rest of the battlefield.

The area south of Norfolk, the Great Dismal Swamp, was largely inaccessible in the Eighteenth Century. A solitary road ran south from Norfolk, crossing the Southern Branch of the Elizabeth River at Great Bridge. Here local citizens were responsible for maintaining the bridge for public use. The road continued on into North Carolina.

When hostilities broke out in Virginia in 1775, Royal Governor Lord Dunmore fled Williamsburg for the safety of a British warship. He took possession of Norfolk, and rallied Loyalists who gathered there. Virginia troops began to close in, with North Carolinians on the way.

Realizing that Norfolk was vulnerable from the south via the road from Great Bridge, Dunmore ordered a wooden stockade fort, Fort Murray, built alongside the road just north of the bridge.

To the south, below the bridge, ran a narrow causeway through the swamp. As the road emerged onto high ground, it passed through the small village of Great Bridge, consisting of a few houses. Here, at the southern end of the causeway, Virginia troops built an earthwork reinforced with logs. A stalemate ensued as the two sides faced each other. Daily skirmishing ensued.

African Americans were involved in the coming fight on both sides. Dunmore issued a decree freeing the slaves of any rebels, hoping to recruit for his cause. On the American side, several free blacks enlisted with the Virginia troops.

When reinforcements in the form of the British 14th Regiment arrived, Dunmore felt strong enough to order an attack. They wasted no time: the regiment arrived at 3 a.m. and by dawn on December 9, 1775, the British moved out. Led by 60 grenadiers from the 14th, they set fires to create a smokescreen to cover their movement.

Map drawn by Captain Samuel Leslie of the 14th Regiment. The map is oriented with south at the top. Fort Murray is seen at the lower left. The road runs over the Great Bridge and along the causeway with buildings on either side. The red ‘M’ are the American defenses, and more are seen to the right.

American pickets fired at them, but the rest of the American troops in the rear did not realize this musket fire was any different from the previous constant firing of the last few days.

Photo: Earthworks Site.  Site of the American earthworks, now destroyed by the southern edge of the modern bridge and canal.  Many of the British casualties fell on the section of the causeway now gone between that point and the photographer’s.

Caught in the narrow causeway, the British had no cover, and took fire from the earthwork in front, as well as riflemen on the sides.  Leading his men, Captain Charles Fordyce fell with fourteen musket balls (or bullet wounds).

It was over in about half an hour. British losses are estimated from 60 to 100. One American was wounded in the hand. Dunmore decided to evacuate Norfolk, and soon Virginia was free of British forces. The incident paved the way for Virginia’s revolutionaries to run the state and move towards independence in concert with the other states.

The site remained unmarked for centuries. Construction of the Albemarle & Chesapeake Canal in 1859 destroyed a key segment of the battlefield. In the Twentieth Century, the road, now known as Battlefield Boulevard, was widened, and suburban growth encroached from all sides. In the 1990s the US Army Corps of Engineers began a replacement project for the drawbridge that carries Battlefield Boulevard over the canal. This provided an opportunity for preservationists, and the City of Chesapeake created a Historic Preservation Plan in 1996. Three years later, citizens founded the Great Bridge Battlefield and Waterways History Foundation.

When the bridge was replaced in 2002, excavation uncovered evidence of the original road and causeway. In fact, several log timbers were unearthed, and saved for the museum.

Thanks to the hard work of the Great Bridge Battlefield and Waterways History Foundation, the park opened in 2011. Today a trail winds through a preserved park, with historic markers and monuments. Nearby a new 8,500 square foot museum is rising adjacent to the battlefield.

Markers illustrated with maps discuss how the battle unfolded, and the changes to the landscape. One of the most impressive features is a reconstructed section of causeway, which is partially exposed to allow visitors to see how the colonial road was built. The crushed shell layer gives way to large timbers, illustrating the impressive engineering to create the original road and causeway.

Photo: Reconstructed causeway. This shows the width and mimics the construction of the original causeway.

Photo:  Detail of causeway reconstruction.  This section is left exposed for visitors to see how the causeway was built.

Until a few years ago there was nothing to mark the site. Today visitors can walk a reconstructed causeway, view markers and monuments, and walk up to the site of the battle’s climax. This is one of the most ambitious preservation projects at a Revolutionary War site today, and it is exciting to watch their progress. To learn more about this site and support their cause, visit http://gbbattlefield.org/. 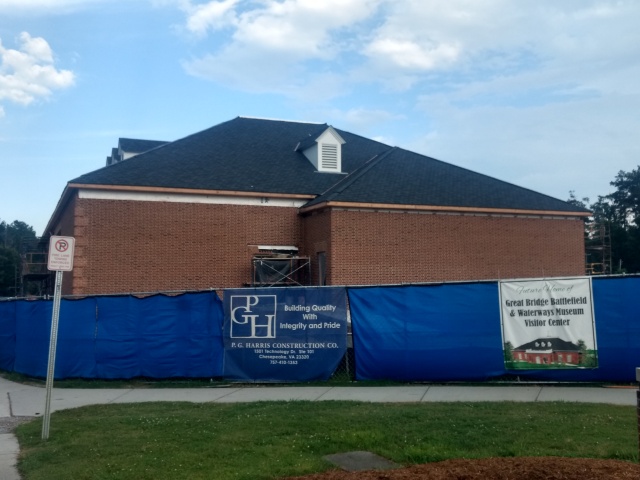 Finally, there is an enduring mystery involving Captain Fordyce’s sword- one that readers might be able to help solve. The Americans buried Fordyce at the Parrish church near the battlefield with full military honors.  His sword was presented to a militia man from Currituck County by the name of William Ferebee, supposedly because he was credited with killing him.  The sword stayed in the Ferebee family at their ancestral home of Culong in Currituck County for many years.  It passed down to another family member (who lived at Linwood plantation) and was taken from the mantle there in April of 1863 when Union troops raided nearby Camden County.

Reference to this is in Glencoe Diary by Elizabeth Curtis Wallace on May 2, 1863. Anyone who has information about the sword or its whereabouts is urged to contact the Foundation.

2 Responses to A new park and museum for Great Bridge