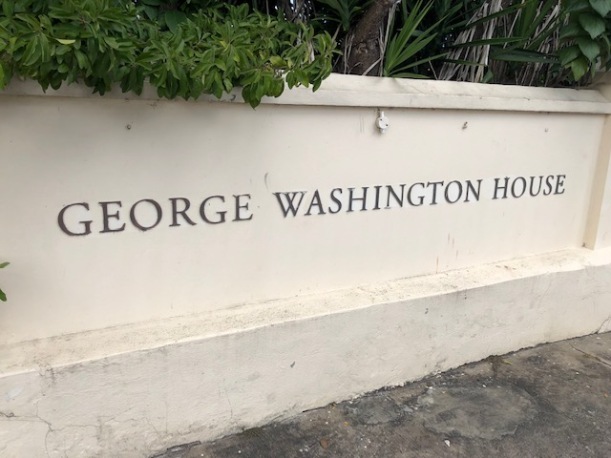 In September 1751, a 19-year old, tall, strapping, young Virginian accompanied an ailing older half-brother on a journey to Barbados, in the West Indies. Unbeknownst to this teenager, the journey to the Caribbean Island would be his last venture out of the colonies and/or country that inhabited the east coast of North America.

The island he visited? Barbados.

Lawrence Washington was sick. He was dying actually, of tuberculosis. His physician recommended a warmer more tropical locale to spend the winter of 1751. The island of Barbados was the destination. Due to family concerns, Lawrence’s younger half-brother, George, agreed to travel to the Caribbean island, one of the jewels of Great Britain’s overseas empire.

Sometime in late September–historians have targeted around the date of September 19, 1751–the Washington brothers boarded the ship Success, and started the six week sail to Barbados. At approximately 4:00 a.m. on November 2nd, the ship caught sight of land and anchored in Carlisle Bay.

Receiving an invitation to the home of Gedney Clarke, an uncle of Lawrence’s spouse. The elder Washington readily accepted, although George was a little unsure. Mr. Clarke’s spouse was just overcoming the dreaded disease; smallpox.

Within two weeks, George would be stricken with this malady. Yet, in the fortnight before, the two Washington brothers discovered the beauty of the island, in which George would remark of the “beautiful prospects which on every side presented to our view…”

Eventually settling–renting–a Captain Crofton’s residence overlooking Carlisle Bay, the yellow painted building stood one mile from major town on the island, Bridgetown. The Washington brothers were welcomed into the high strata of society on the island, through James Carter, kin to the powerful Carter family in the colony of Virginia. George met a plethora of high officials, military officers, and even dined with the governor of Tortola, another British island colony in the Caribbean.  When the younger Washington wrote he was “Genteely receiv’d and agreeably enterain’d” he was not exaggerating.

However, approximately two weeks after first casting his eyes on the rocky outcropping of the island, George was stricken with smallpox on November 17, 1751. Yet, the young Virginian showed a favorable composition and recovered within a month. Upon his recovery, George would sail back to Virginia whereas Lawrence would continue on to Bermuda hoping to find a favorable clime to ail his suffering. Unfortunately, there was no respite for the elder half-brother of George and he would eventually return to Virginia to settle his estate and die.

This would be George Washington’s only trip out of the continental United States. After the six week journey to Barbados, on the “fickle & Merciliss Ocean” one can understand why he was not too eager to get on the open seas today.

For travelers today though, one can arrive in Barbados by boat or plane, based on personal preference. For more information about visiting the site, which is open Monday through Friday, click here. Guided tours, film, small gift shop, and a second floor exhibit area make for a great half-day visit to the home that once enjoyed Washington’s company.

Another reason to visit comes from the closing line from the guide who led my group through the dwelling, “Barbados saved Washington before Washington saved the United States.”

One thought on “ERW Weekender: The George Washington House”