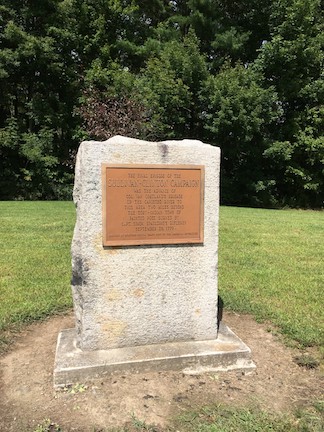 I’m sure the men who’d embarked on the 1779 Sullivan-Clinton Campaign weren’t traveling along New York’s Southern Tier Expressway as they moved through the lands of the Iroquois Confederation. In the “Tory-Indian Town of Painted Post,” I’m sure members of the expedition didn’t decide on a detour down U.S. Rt. 15 south toward the Pennsylvania state line.

But that’s how I came across a monument to the expedition during recent travels, located at a parking area along Rt. 15 south.

Organized by George Washington and led by Maj. Gen. John Sullivan and Brig. Gen. James Clinton, the 3,200-man expedition traveled through the Finger Lakes region of New York, punishing members of the Iroquois Confederation who’d sided with the British. Of the Six Iroquois Nations, the Cayugas, Mohawks, Onondagas, and Senecas aligned themselves with the British while the Oneidas and Tuscaroras aligned themselves with the colonists.

The major military engagement of the expedition occurred on August 29, 1779, at the battle of Newtown, just outside the modern city of Elmira. (Check out my visit to the battlefield.) From there, the expedition pushed farther west, going as far as the area around modern day Genesee, New York.

As part of the expedition, Sullivan’s men linked up with a small force led by Col. Philip van Cortlandt. A wealthy landowner and surveyor prior to the war, van Cortlandt was also active with the New York militia. During the war, he served on Washington’s staff, fought at Saratoga, and was at Valley Forge. In the summer of 1779, he led a body of troopers up the Susquehanna River to link up with Sullivan’s forces several miles east of Newtown. They took part in the battle there and then continued westward with Sullivan’s army.

The Sullivan-Clinton expedition was, from a Continental perspective, a huge success. They destroyed dozens of Iroquois villages. Hundreds, if not thousands, of people fled to the safety of British fortifications in Canada. As van Cortlandt later wrote in his memoir, “the Enemy…fled to Niagary (Niagara) where we afterwards heard they suffered greatly[.] many died[.] in short our Expedition was their compleat overthrow.”

Sullivan was supposed to go all the way to Niagara himself but instead, feeling his isolation, turned the expedition around. During the army’s return march, van Cortlandt’s men took time to enjoy a visit to Cayuga Lake. Then Sullivan “Sent me with a Command up the Tioga River and passed the painted Post &c. and return’d to Newtown….” By that point, the main army had returned to the point where van Cortlandt’s men first met up with them, so he and his men headed back toward whence they’d come, eventually ending up in Morristown.

That trip up the river was commemorated by the roadside marker I found, which misspelled Van Cortlandt’s name.