The Other Great Artilleryman

Mention the words “artillery” and “American Revolution” and what name instantly pops into your mind? Henry Knox.

Yet, like George Washington, Knox needed competent officers under him to successfully organize, train, lead, and develop the artillery arm of the Continental Army.

Born on the first day of 1735 in New York City, he was destined to rebel. The reason he was even born in New York City was due to the fact that his father, a convicted burglar had been sentenced for deportation to the colonies in the 1720s.

His early upbringing saw him become a prosperous wine merchant and he quickly ingratiated himself into the burgeoning patriot movement by becoming an integral part of the Sons of Liberty in New York City.

With his connection to the Sons of Liberty, Lamb was a prolific writer, authoring articles and handbills, anonymously of course that fueled the movement toward independence. Since New York City had a sizable population of Loyalists, Lamb’s ability to develop text and articulate the principles of the burgeoning movement is more impressive.

When news reached the city of the engagements at Lexington and Concord in April 1775, Lamb put down the quill and picked up the proverbial sword, helping seize the important military stores held by the colony at Turtle Bay. Lamb quickly gained a commission as a captain in the artillery and saw his first action in the Canada campaign, under Generals Richard Montgomery and Benedict Arnold. He was wounded during the climactic Battle of Quebec on the last day of 1775 and was captured.

Lamb was fortunate to be paroled a few days into 1776 but took an entire year for him to be officially exchanged, which occurred in January 1777. With the dawning of that new year, 1777, Lamb had been promoted to colonel within the artillery branch. At the same time an artillery regiment, named Lamb’s Continental Artillery Regiment, later to be known as the 2nd Continental Artillery Regiment was authorized by the Continental Congress. Altogether, 12 companies comprised the regiment, with units comprising artillerymen from Connecticut, New York, and Pennsylvania.

He was impressive during action at the Battle of Ridgefield in April 1777 where his guns tried to turn back an assault by enemy infantry. The native New Yorker was grieviously wounded, to the point where reports listed him as killed in action, as he was left on the field. Later that year the regiment of artillery was assigned to the Highlands Department.

With that assignment, Lamb, the following year and through 1780 was in charge of the artillery at West Point, New York. During that tenure, Lamb would have been present for the defection and betrayal of General Benedict Arnold. The night after Arnold’s treason, General George Washington, showing his trust in Lamb, appointed him the temporary commander of Kings Ferry, near Verplanck Point, a vital ferry point of the Hudson River. Washington did not trust another commander currently in the vicinity and thus tabbed Lamb for the assignment.

On August 28, 1781, Lamb’s regiment was reassigned to the main army and ventured south to Yorktown, Virginia. On October 9, the start of the Siege of Yorktown, Lamb was the officer of the day as his commander, George Washington, fired off the first artillery piece toward the British lines.

Lamb would receive praise from Washington and also acknowledgment from the chief of artillery, General Henry Knox, for their services during the pivotal siege. Reinforcing that praise was the fact that when the army departed Virginia to head north, Lamb was tabbed for temporary command of all the artillery and oversaw their movement back to positions in his native state.

He would serve throughout the remainder of the war and be brevetted a brigadier general on September 30, 1783. After the war he was a collector for the port of New York and became a strong anti-Federalist during the ratification debates for the United States Constitution. He served as an anti-Federalist chairman of the Federal Republican Committee in New York and helped spread literature supporting their views throughout the state in 1787 and into 1788. He was on writing terms with such luminaries, such as Richard Henry Lee and Patrick Henry, in the anti-Federalist movement.

Unfortunately, Lamb died in poverty on May 31, 1800. The cause was that he had given one of his employees, during his time as port collector more responsibility. Sadly, this employee took advantage of the goodwill of Lamb, who had bailed the gentleman out of debtor’s prison by paying off his debts and had personally saw to him getting the job within the port collector office. When that said individual left the position, Lamb realized that the former employee had not rectified his ways and had been embezzling from Lamb himself and also from the Federal government coffers too.

Alexander Hamilton was part of the investigation and even though they were political opposites, with Hamilton being a Federalist, their personal connection and former military ties forged a reasonable accommodation for Lamb to repay the debts. The former artillery colonel was able to put forward land he owned to satisfy the debts. 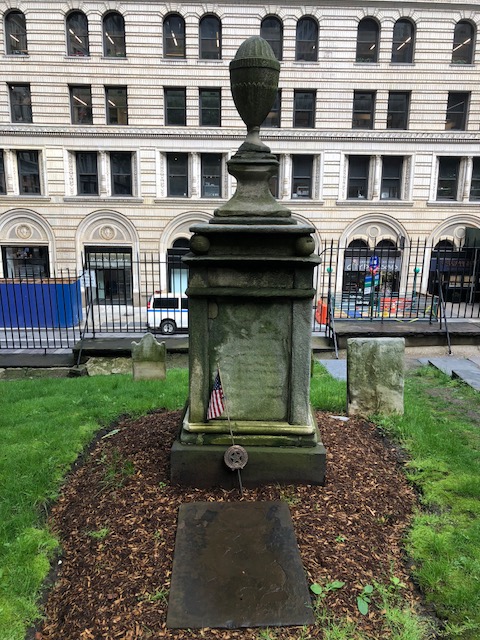 Even so, Lamb saw political enemies rise from within the state and lower the value of the land he had put up as payment. The new price tag for that land was able to equal out what Lamb owed the federal government but did not back-fill his personal finances. Lamb was never able to recover financially and thus died a pauper and was buried in Trinity Churchyard in downtown Manhattan, New York.

Yet, his personal acumen and role in the artillery branch during the American Revolution enshrined him in the pantheon of those general officers that helped secure American independence but without attaining a household name.

He was, however, held in high-esteem by his peers. Not only by Hamilton, which was mentioned above, but also by Washington, who as president, allowed Lamb, as an anti-Federalist to retain his post as collector during his entire presidential administration.