“I hope my visit to Boston will do good…” Confederate Colonel John S. Mosby and American Revolution

A version of this post appeared in the Emerging Civil War blog on August 17, 2018. 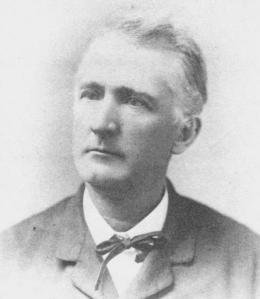 Those who know me know of my “interest” in famous Confederate partisan, John S. Mosby. Ok, some would say “love affair,” but either way, I grew up reading about Mosby and his exploits during the Civil War. It was not until later in my life that I started to read about the most interesting part of Mosby’s life—not his time in the war, but his time AFTER the war.

Mosby had a deep interest and passion in American history and you can see that on a trip that Mosby took north in April 1906 to one of the sacred sites of America’s founding: Boston, Massachusetts. In a 1906 letter to his friend Sam Chapman (a former member of Mosby’s Rangers), Mosby describes his visit and the many ironies (as a southerner) he experienced.

Mosby was 72 at the time and two former prisoners of his during the Civil War greeted him and acted as his tour guides to Lexington and Concord. In the letter—which I’ve transcribed below—you will see Mosby’s reverence and respect for the places he visited. You can also see his love of Ralph Emerson and Daniel Webster evident in his writing.

Even though Mosby spent four years fighting men from New England, he never lost respect for them or the history the region held. His letter reads like a modern day tourist blog or Facebook timeline, updating all the historic sites he was visiting. One can hear the excitement and enjoyment he has for standing (and sitting) in important places in American history. The connections of the American Revolution and Civil War are apparent in many places, but this instance may be shocking to some who only know Mosby’s war time career.

The original letter is in the collection of the Fauquier Historical Society in Warrenton, VA. Any mistakes in the transcription are mine alone. Enjoy this unique connection of the Civil War to the American Revolution. I will let the letter stand for itself.

As I write the date of this letter I am reminded that about this time 43 years ago you were surrounding the 1st West. Va. Cavalry regiment at Warrenton Junction.

I returned on Tuesday from Boston. I had a perfect ovation there. Two Union soldiers who we captured came to Providence to meet me. They took me all over Massachusetts to historic spots, Bunker Hill, Faneuil Hall, Lexington, Concord, Cambridge, Plymouth Rock and Marshfield, Daniel Webster’s home. You know how I have always been not only ad admirer but an idolater of Webster. At the Grant banquet, I sat between my two former prisoners. They came to the train to see me off. Each brought a token of friendship with them. The first day I was in Boston I felt sorry that I had ever captured these two men. They showed so much kindness to me. After that I felt sorry they did not capture me. At the train when parting I said that I never could forget their kindness. One, Captain Barton replied “We have not half paid the debt owed you for your kindness to us.” I sent you a paper with the short speech I made at the banquet. If you have had heard the applause when I concluded you wd. have thought there was an earthquake in Boston (there were just reports of one in San Francisco). I do not think I said a word about Grant or Lee that any Southern or Northern fair minded wd. not endorse.

Judge Bruce, who lives at Walden, 6 miles from Boston took me home with him to dinner and I spent the night there, the Governor and Secretary of State came out to dinner on an automobile. The next morning, Captain Barton, my former prisoner, drove me back to Boston. We stopped at Harvard to see Mrs. Webster, the daughter of Major Forbes who we captured. She and her husband were all kindness. I supposed I mentioned that I was going to Concord and Lexington as I recd. from her that evening a nice letter enclosing a note of introduction to her Aunt, Miss Emerson, the daughter of Ralph Waldo Emerson, who lives at their old home in Concord.

Sunday we drove to Lexington and Concord along the same road on wch. Paul Revere took his midnight ride to warn the farmers that the British were coming. We spent several hours at Lexington, recd. a great deal of attention and dined with an old Union soldier.

Then we drove on, six miles, to Concord – stopped at the Emerson home on the outskirts of town and presented my letter of introduction. Miss Emerson had recd. a note from her niece telling her I was coming and she was expecting me. She recd. me cordially and took me to her father’s studio. Of course it was interesting to me. I am familiar with Emerson’s writings and I have read his life by Dr. Holmes. My memory seemed to recall all I had read connected with him. I told her that I had all my life been reading and repeating her father’s ode on the unveiling of the Concord monument and that I wanted to read it in the room where it was written. So she handed me the volume that had the poem. I opened it, a gentleman asked me to read it aloud wch. I did – it begins “By the rude bridge that arched the flood, Their flag to April’s breeze unfurled, tis here the embattled farmers stood, And fired the shot heard round the world.” I read it with deep feeling for I felt it. I had just finished reading it when Mrs. Webster and her husband came in. They though I wd. be there and had driven ten miles to see me. Then we drove on to Concord bridge where the fight began and the monument stands. To me Lexington and Concord are the two most interesting places I ever was at. They made a deep impression on me. When a child I read about them in Peter Parley, but never expected to see them and then I was overwhelmed with kindness.

On Saturday we went down to Marshfield, Daniel Webster’s home and also to Plymouth

Rock. Of course any place associated with Daniel Webster is interesting to me. The lady at the house showed me his powder horn and a pair of pants in the old style of flaps wch. he wore about the farm. I sat in the chair in wch. he meditated his great orations. We then went to the family burying ground. Only the Webster family is buried there. There is a turfed oval mound about 4 feet high and a marble slab of the same height over Webster. Its simplicity is beftting the great man who sleeps under it. As I stood by Webster’s tomb I involuntarily repeated Milton’s lines of Shakespeare’s “what needest my Shakespeare to be laid beneath a star pointing pyramid? And so sepulchered in such pomp doth lie, that kings for such a tomb might die…”

We also went to Plymouth, not far from Marshfield and I stood on the Rock where the Pilgrims landed from the Mayflower. I do not believe in their theology and long prayers – Their hell fire and damnation, yet they are noble bunch of heroes inspired by lofty motives and are worthy of praise of Mrs. Hemans’ hymn. I forgot to mention that one of the most interesting characters I met was an old fisherman who told me that he had often gone out in a boat with Daniel Webster fishing. I wished I was that fisherman. I hope my visit to Boston will do goo. You can let Major Yost and Hugh McIlhany read this letter

I forgot to mention that I had been only a few minutes in Faneuil Hall before the champagne bottles began to pop. I wonder what the Pilgrims wd. have thought of that?