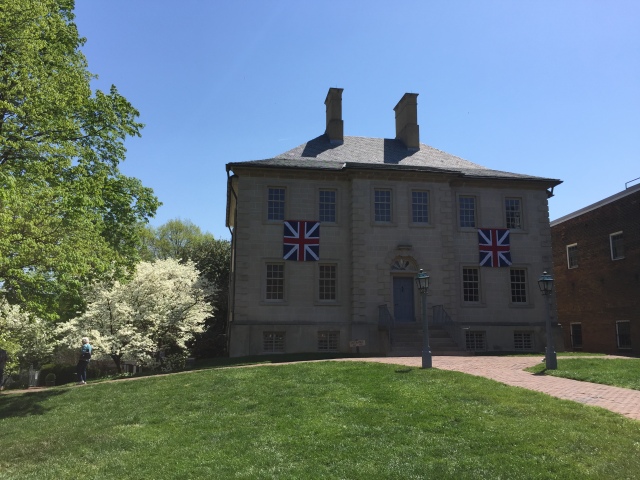 A consortium of three counties and three towns in Northern Virginia, known as NOVA Parks, owns and operates Carlyle House in the heart of a small town that has become a close-in suburb of Washington, DC.  It also owns and operates a range of locations from nature sanctuaries and recreational facilities to battlefields and other historic homes, all of which are worth visiting.

The British merchant, John Carlyle (1720-1780), was born in Scotland, a second son who had to make his fortune in the colonies.  He became the colonial agent for a British merchant firm and moved to Virginia, helping found the city of Alexandria on the Potomac River.  There, he purchased two centrally located lots in 1749 when the town was being developed.  He married into the wealthy Fairfax family and began constructing a magnificent stone Georgian mansion in 1751.  It was finished in 1753.  Carlyle moved in with his pregnant wife, Sarah Fairfax Carlyle, in 1753.  She gave birth to their first son that night.  Sarah bore six more children, but only two lived past childhood before she died in 1761.  John’s second wife, Sybil, gave birth to another four children, but only one survived.  (He died at the Battle of Eutaw Springs.)  So, in its heyday, Carlyle House would have been sad indeed.

Large and inviting, the building nevertheless dominated the center of town and would have been visible from the riverfront, where Carlyle owned a warehouse.  So, it was natural that General Edward Braddock would appropriate the house as his headquarters in 1755, ensuring its place in history.  Despite the importance of the personages settled under his roof, John Carlyle wrote his brother that Braddock and his guests had “abused his house and furnishings.”  After Carlyle’s death in 1780, the house passed through a number of heirs before furniture maker James Green acquired it in 1848.  At the time, a bank also existed on the property, which Green converted into a hotel and then expanded further, obscuring the original mansion from the street.  During the Civil War, Union troops occupied Alexandria and evicted the Greens, eventually turning the hotel into a hospital.  The recent PBS Series “Mercy Street” revolved around the people whose lives intersected at the hotel-turned-hospital.

In the following century, Green’s hotel became an apartment building, but general neglect plagued it and John Carlyle’s original mansion.  NOVA Parks acquired it in 1970, determined to renovate it in time for the American bicentennial.  Tearing down the hotel and post-colonial additions, NOVA Parks restored the Carlyle House to its 18th century splendor and opened it to the public in 1976.

Unlike many buildings in the older parts of Alexandria, known as “Old Town,” Carlyle House is well set back from the road, allowing visitors to take in an imposing front entrance.  While taller buildings have grown up around it, the building boasts beautiful gardens on its north and east sides.  The eastern elevation faces the Potomac River, which would have been visible from the front door in John Carlyle’s day, but is now obscured by taller condominiums and an art center converted from an old WWI-era torpedo factory.  Because NOVA Parks are public, the gardens are accessible during the day, a small area of green in the heart of a town that retains much of its 18th century charm.  The dogwood, flowering fruit trees, and azaleas were in bloom.  Interpretative signs can be found at various points along the brick pathway that meanders through the garden, relating Carlyle’s biography and history of the house over the last two and a half centuries. 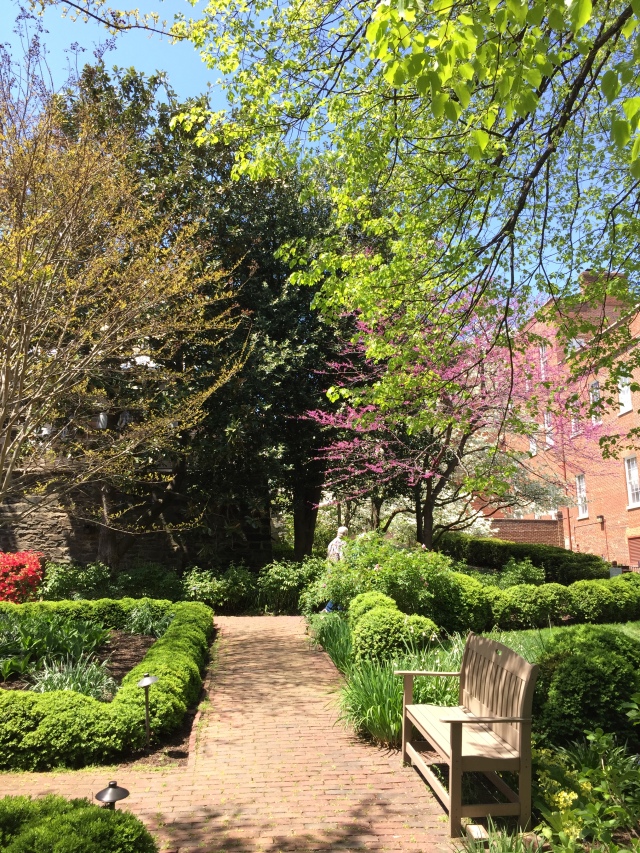 The front entrance to the house is closed, so visitors follow a brick path around the side to a basement entrance, where they can pay for admittance to the house, pick up a souvenir, and meet a docent for a guided tour.  After a brief introduction to Carlyle, the tour proceeds upstairs to the central hall so common in many colonial Virginia homes.  Carlyle House seems generally darker than its countryside contemporaries, Gunston Hall, Mount Vernon, or even Monticello, reflecting its urban location, smaller windows, and slightly older construction.  The builders set a series of windows at one end of the central hallway which, together, would have created a panorama view of the riverfront from the house’s stairs and upper levels during its colonial heyday.  In Carlyle’s time, they were likely the dominant source of lighting during the day. 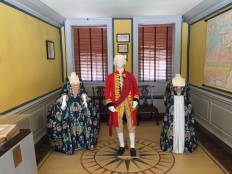 The first floor is rather conventional for an 18th century Georgian colonial: grand center hallway and staircase, master bedroom, and parlor, etc.  Up the stairwell, one finds an exhibit with three mannequins, one wearing a floral print wedding dress, one wearing a colonial uniform, and the third wearing a more “modern” party dress made from the same repurposed material used in the wedding dress.  Together, they give a visitor a sense of the changing fashions in Carlyle’s day.  A central hallway runs the width of the house with bedrooms off to either side.  Carlyle’s youngest son’s bedroom has been restored.

The Carlyle furniture was sold off over time, but NOVA Parks has assembled several period pieces to give visitors a sense of what the house would have looked like in his day.  The group even tracked down a portrait of the homeowner in Scotland and a replica hangs in his office.  One room remains empty and maintained in a state of renovation to show visitors what the process was like.

Carlyle House’s normal hours are 10 am to 4 pm, Tuesday-Saturday, and noon to 4 pm on Sunday.  It also conducts a range of educational programs, special events, and is open for rental.  Today, Old Town Alexandria is a hip suburb of Washington, DC, in part because it maintains the air of an 18th century town.  Visitors can still capture a sense of what the place was like when Edward Braddock, John Carlyle, George Mason and George Washington walked the streets.  In any such trip, Carlyle House should figure prominently on the agenda.