Fort Stanwix in Rome, New York, has plenty of history to offer, but it’s equally a success story of urban renewal. The fort’s original location was long swallowed up by the city’s expansion in the twentieth century, but it was then reclaimed in advance of the American Bicentennial. City blocks were razed, the fort reconstructed, and American history became a central tourist attraction in the heart of downtown Rome. It’s a “faithful reproduction,” the Park Service says, constructed using “many original plans and documents.”

The Oneida Carrying Place was a vital link for trade. A display at the Ft. Stanwix visitor center illustrates that connection between a Scotch settler and a member of the Oneida nation.

The fort’s history, though, dates back well before the Revolution. “For thousands of years, the ancient trail that connects the Mohawk River and Wood Creek served as a vital link for the people traveling between the Atlantic Ocean and Lake Ontario,” the National Park Service says. The “well-worn route through Oneida Indian territory” eventually became known as the Oneida Carrying Place. Fort Stanwix was built in 1758, with Oneida permission, to help protect British interests along the trail during the French and Indian War.

After the war, the fort became the site of important negotiations between the British and the six-nation Iroquois Confederation. Less than a decade later, the Iroquois found themselves in the middle of another war—this one between the colonists and the British. The war caused a split among the six nations that led to civil war. 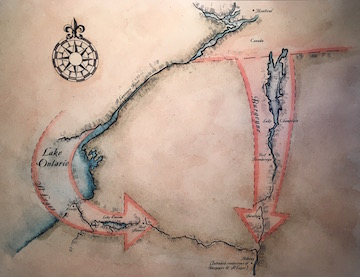 Aside from columns from the north and west, a British column was set to converge on Albany from the south. (courtesy NPS)

In the summer of 1777, the British launched a campaign to control New York and split it from New England. From the north and south, British forces converged on Albany, while a third column converged from Lake Ontario through the Mohawk Valley along the Oneida Carrying Place—right past Fort Stanwix (which had, by then, been renamed Fort Schuyler after a colonial general from New York). Led by Brig. Gen. Barry St. Leger, the column besieged the fort. However, the garrison, commanded by Col. Peter Gansevoort, proved surprisingly resilient.

On August 6, the British turned back a column of relief at the battle of Oriskany, but in retaliation, the garrison led a sortie to loot the British camp, effectively resupplying themselves while simultaneously demoralizing the British. A second column of relief—this one led by Benedict Arnold—force the British to abandon their siege on August 21. Soon followed by the British loss at Saratoga, the American victory at Ft. Stanwix helped turn the tide of the Revolution.

After the war, the newly formed United States negotiated another treaty with Native Americans, again using Fort Stanwix as the meeting place. The treaty recognized American Indians as sovereign nations within state borders even as it bullied them into unfavorable terms.

Today, the reconstructed fort and its visitor center and museum tell this convoluted and, I think, under-appreciated history. The five-sided star fort looks as it did during the Revolution, with barracks, a parade ground, storehouses, casemates, bastions, and bombproofs. To get into the fort, you take a short walk from the visitor center to the front drawbridge, which traverses a deep moat hemmed in by a thick glacis.

As an extension of its original “urban renewal” mission, the fort continues to partner with state and local agencies, public and private organizations, and the Oneida Indian Nation “to relate our shared heritage and preserve related historic sites.” That includes everything from seasonal living history demonstrations in the fort to a partnership with the state of New York to administer the Oriskany Battlefield (which I’ll talk visit in an upcoming post).

The Marinus Willett Visitor Center tells the long, intertwined history of the fort through multiple perspectives, including British soldier, an Oneida woman, a local trapper, and a colonial. Mutlimedia presentations make the stories immediate and relatable. The museum collection includes more than 400,000 artifacts.

The Park Service brochure claims “All roads lead to Rome,” which can seem a stretch. Fort Stanwix can seem way out of the way. That said, it’s a quick stop off the New York State Thruway for people traveling between Syracuse and Albany. Designed to attract tourists and visitors, Fort Stanwix is well worth the visit.

1 Response to ERW Weekender: A Visit to Fort Stanwix