Historians from the Past: Lyman Draper 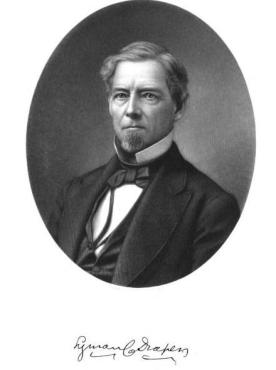 Lyman Copeland Draper from the Fronts-pieceof his book, King’s Mountain and its Heroes, 1881 (Wikimedia Commons)

For the last century, everyone studying the frontier in the American Revolution has owed a debt to Lyman C. Draper.   Not many people are familiar with him, but he compiled one of the deepest and most extensive collections of original material related to the Trans-Appalachian Frontier, particularly during the American Revolution.  His hard work and extensive efforts represent a life dedicated to history that enabled his successors to continue his remarkable work .

Born in western New York in 1815, Draper’s grandfathers were both veterans of war with the British, either during the American Revolution or the War of 1812.  Given the number of veterans moving west to start farms after the war, a young and impressionable Draper heard their stories.  Draper’s family eventually settled in Lockport, NY on the Erie Canal and that is where he attended primary school.  While there, the Marquis de Lafayette visited the town during his 1825 American tour.  By then, Draper seems to have been hooked on history.  He wrote his first school essay on Lafayette.  His his first published article in 1833 was on Charles Carroll, the last living signer of the Declaration of Independence.  (Carroll died at the end of 1832, which occasioned the piece.)  The same year, he left home and began a lifetime habit of travel, working his way down to Mobile, Alabama, then New Orleans and up the Mississippi in 1834.  Eventually, he made his way to Granville College in Granville, Ohio for two years and then re-joined his parents, who had moved to Toledo.  (Granville College has since become Denison University.)   In northwest Ohio, Draper participated in the “Toledo War,” essentially a series of skirmishes between the citizens of Toledo and Detroit over proper placement of the border between Michigan and Ohio.  With two years at Granville under his belt, Draper then headed for the Hudson River Seminary in Stockport, NY, which he attended for a year.

Sometime in 1838, Draper decided he wanted to write a history of the Western pioneers, essentially those who settled the Revolutionary War frontier.  He had already begun consuming the first generation of histories written by men like Joseph Doddridge and Alexander Withers, but theirs were scattershot efforts guided largely by collecting local stories and repeating them.  Naturally, contradictions and factual errors crept into those early histories.  Draper wanted to sort them out.  So, he began collecting material.  This included published works, but, more importantly, unpublished manuscripts, diaries, and correspondence.  Critically, he also began exchanging his own letters and questionnaires with as many former frontiersmen and their descendants as he could find, continually amassing new material, and taking extensive notes on his findings.  In his travels, he interviewed people face-to-face.

Yet, Draper was not ready or able to settle down and write his book.  Instead, he moved to Mississippi and edited a newspaper, worked as a farmer, and served as a justice of the peace.  Then it was back north to New York, where he was a clerk to an Erie Canal Superintendent in Buffalo, followed by residences and odd jobs in Baltimore and Philadelphia.  It was not a typical life for a budding historian, but Draper’s repository of material about the 18th century American frontier continued to grow, aided by his frequent travel .

By 1852, Draper had moved to Madison, Wisconsin, where he finally  settled.  In 1853, he joined the Executive Committee of the State Historical Society of Wisconsin.  A year later he became Corresponding Secretary and editor of the society’s historical publications.  While there, he led efforts to assemble its library and archival collections while raising money for a new building to house the society’s growing resources.  His efforts included lobbying the state legislature for permanent funding and then working with the government to build a state-funded library system across Wisconsin.  (Funding dried up during the American Civil War.)  He also involved himself in public education, quickly becoming State Superintendent of Education.

His career in public service and education did not stop Draper from continuing to collect materials about the American frontier and the war that raged along it during the Revolution.   He traveled some 60,000 miles between 1840 and 1879, pursuing every lead he could find, conducting personal interviews, taking extensive notes where he could, and even identifying local correspondents who could conduct interviews in his stead.  His notes and the number of diaries, memoirs, reports, and correspondence filling his personal library continued to grow.  By 1881, some 3,000 volumes of material filled his personal shelves.  It had grown so large that Draper stored much of it in a barn on his property.  This was in addition to his work steering the historical society’s acquisitions.

Despite his growing archive, public service forced Draper to defer writing his ambitious book about the frontier.  Ironically, he instead co-authored a manual on local government and economics titled: The Helping Hand: An American Home Book for Town and Country.  Still, word of his personal history collection began circulating and other historians made use of it with Draper’s assistance and guidance.  Granville College granted him an honorary master’s degree out of respect for his work.  In 1871, the University of Wisconsin, which had become home to a growing collection of material about the frontier war, conferred on him an L.L. D., a Doctor of Laws, in recognition for his continuing contributions to historical literature and efforts to build out a public library at Madison.

Draper finally completed his first book about the American Revolution: King’s Mountain and its Heroes, published in Cincinnati by Peter G. Thomson in 1881.  Alas, Draper never finished planned opuses on George Rogers Clark or Thomas Sumter.  He finally retired from the Historical Society in 1887 and was succeeded by his assistant, Reuben Gold Thwaites.  He died in 1891 and much of his work was donated to the society’s archives.  In 1905, Thwaites and his research and editorial assistant, Louise Phelps Kellogg, began publishing selected manuscripts from the Draper collection covering the war in the Upper Ohio River Valley.  They covered the period from Dunmore’s War through the end of the American Revolution.  Kellogg completed the series on her own in 1917, with the publication of volume V, which ends in 1781.  Today, the society’s Draper collection is organized into 491 volumes divided into 50 series and available in microform or microfiche at many larger university libraries.  Heritage Books published a few additional selections in the 1990s under the editorship of Jared Lobdell.