Shouts pierced the icy stillness of the night as a raucous crowd gathered in Boston’s King Street on the night of March 5, 1770. With their voices carrying through the wintry air all the way to Long Wharf, the crowd hurled insults at eight British soldiers and their captain. The soldiers’ muskets rattled as snowballs, oyster shells, and chunks of ice lobbed by the unruly crowd rained down upon them. 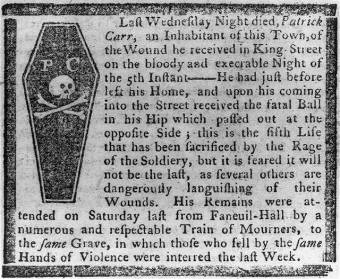 Fifth Victim is the sketch of the coffin of Patrick Carr, published in the Boston-Gazette and Country Journal on19 March 1770.

The soldiers shot eleven townspeople that night. Three died in the snow where they stood. Two more would later die from their wounds. The remaining six would survive. All of the victims were male.

Documentary evidence shows that the crowd in King Street on the night of the Boston Massacre was overwhelmingly male. The crowd was variously described as “mostly boys and youngsters”, “near 200 boys and men”, “a parcel of Rude boys”, and “chiefly consisting of boys and lads”.[1]

Henry Knox, who served as a witness at the trial of the British soldiers later that year, recalled hearing bells ringing and thinking there was a fire in the town. But instead of fire, he came across a number of boys in King Street gathered around the Sentinel on duty. Knox testified that “the boys were hallowing fire and be damned” and he recounted having to push a boy off the Sentry on duty.[2] As the defense attorney for the British soldiers, John Adams characterized many of the crowd’s participants as “saucy boys”.[3]

After the massacre, scores of men provided firsthand accounts as to what they had observed that night in King Street. Dozens upon dozens of men testified as witnesses for both the Crown and the defense at the trials of Captain Preston and the soldiers.

Four Victims is the sketch of the coffins of victims Samuel Gray, Samuel Maverick, James Caldwell, and Crispus Attucks published in the Boston-Gazette and Country Journal on 12 March 1770.

Nearly drowned out amongst the clamor of male voices and barely registering above a whisper, the observations of only two female eyewitnesses to the massacre have reached us today. These women were Jane Whitehouse and Elizabeth Avery.

Jane Whitehouse served as a witness for the defense at the trial of Captain Preston. She lived on Royal Exchange Lane, right off King Street. On that evening, she heard a noise and went outside. She walked up to the Sentry on duty, Private Hugh White of the Twenty-Ninth Regiment of Foot, at his position outside the Custom House on King Street.

“I ask’d Centry what noise was. People coming from Town House said there is the Centry there is the bloody-backed Son of a Bitch… They keep coming along throw Oyster Shells chunks of wood and Snow Balls at Centry and beat him from Box to Custom House Steps.

“I stept a little advancing and heard a Gentleman ask Capt. if he was going to fire, he said no Sir by no means by no means. Then Centry push’d me back and bid me go home or I should be killed.”[4]

Whitehouse was mere steps away from the soldiers when they fired upon the crowd. She swore at trial that Preston gave no order to his men to fire. “Captain Preston did not give word to fire. I was in 1 ½ yd. of him. I must have heard if he gave orders to fire, for my attention was on him…”[5]

The other female eyewitness whose observations were recorded was Elizabeth Avery. She watched the shootings from the second floor of the Custom House along with two other women, Ann Green and Mary Rogers.  Ann’s brother, Hammond, watched with them. 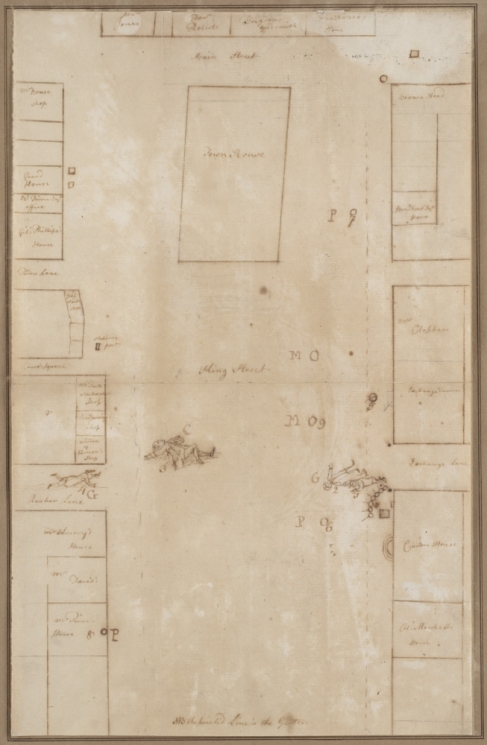 Revere Plan is a hand-drawn diagram of the King Street area where the massacre occurred. (Map reproduction courtesy of the Norman B. Leventhal Map Center at the Boston Public Library)

Elizabeth Avery and Ann Green both testified as witnesses in another, separate trial later that year where they recounted their experience on the night of March 5th. Only Avery’s testimony is available as Green’s account was apparently thought to be so similar to Avery’s that it hardly warranted separate transcription. Mary Rogers did not testify.

Avery was a maid who lived and worked in the Custom House with the Green family. Earlier on the evening of the massacre, Ann Green and Elizabeth Avery were accompanied on an errand to the apothecary shop by apprentice Bartholomew Broaders. Along the way they met another apprentice, Edward Garrick. The four returned together to the Custom House where they visited a while. Then Broaders and Garrick departed and went back out into King Street.

Mere moments after leaving the Custom House, the two boys got into a verbal altercation with Private White. In response to some (admittedly rather witty) insults offered by young Garrick in which he suggested that there were no gentlemen in the regiment, White rapped Garrick on the head with the butt of his musket.[6]

Although there was no actual fire in King Street, “as any little Spark would inkindle a great fire”,[7] the altercation between Garrick and White grew into a conflagration and attracted more people into King Street. The ringing of bells—the town’s fire alarm—would bring even more.

“I lived with Mr. Bartholemew Green at the Custom-house on the 5th of March last, and when the noise was in the street, before the house I went with [Hammond Green, Nancey Green and Mary Rogers] up into that chamber of the house, which is next to Royal exchange-lane and right over the Sentry box as it then stood, and from the west window in that room saw the party of soldiers come down from the Main-guard to the Sentry; I tarried in this room till the firing was all over, and the soldiers had returned from whence they came.”[8]

The dearth of documentary evidence makes it difficult to know what were the activities, observations, and experiences of Boston’s women that night. However, the actions of some women are illuminated by the depositions or testimony given by men.

At the trial of the British soldiers later that year, Benjamin Burdick testified that he grabbed a stick to bring out with him that night. But his wife called him back and said “it is not fire, it is an affray in King-street, if you are going take this” and handed him a Highland broadsword.[9] This was fortuitous as Burdick would later use that sword to deflect a slash from a bayonet-wielding soldier.

Catherine Field did not witness the shootings but testified that she and her husband had pleaded unsuccessfully with 30-year-old Patrick Carr to stay home that night and not join the fracas in King Street. Instead, Carr hid a sword under his coat and made for the door. Finally, an anonymous woman who lived next door prevailed upon him. She “coaxed the sword out of his hand, and he went without it”.[10]

A sword would not have helped Carr that night. While Carr stood in King Street, a ball from a British musket “went through his right hip & tore away part of the backbone” .[11] The unfortunate Carr lingered for nine days before dying.

James Thompson testified that he was aboard a ship at Griffins Wharf and heard a woman in the distance exclaim “it is no fire, good God there will be murder committed this Night.”[12] Dr. John Jeffries testified that he was at his father’s house that evening when a female neighbor rushed in and said “pray sir come out, there will be murder, the soldiers and people are fighting.”[13] The identities of these women, much like the neighbor who disarmed Patrick Carr, are unknown. 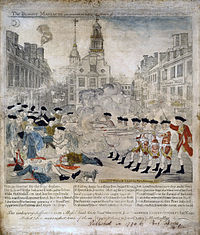 Bloody Massacre is the famous engraving fully entitled “The Bloody Massacre Perpetrated in King Street Boston on March 5th 1770 by a Party of the 29th Regt.”

In his famous engraving “The Bloody Massacre Perpetrated in King Street Boston on March 5th 1770 by a Party of the 29th Regt.”, Paul Revere depicted a woman in the crowd. Whether the woman is supposed to represent women in the crowd in general, or Jane Whitehouse in particular, is unclear.

Beyond Whitehouse, Avery, and the scant mention of a few anonymous women, we know little about what other women in Boston might have witnessed in King Street on the night of the massacre. Perhaps others observed the shootings firsthand whether from in the crowd, like Whitehouse, or from indoors and looking out windows, like Avery. If so, there are no records of it. This lack of women’s perspectives requires us to contemplate limitations in the historical record of the massacre.

We know one last thing about Elizabeth Avery’s activity that night. Hammond Green, who had watched the shooting with her from upstairs in the Custom House, testified that he “saw several guns fired in King-street, which killed three persons, which I saw lay on the snow in the street…after that, I let Eliza Avery out of the front door and shut it after her.”[14]

As the door of the Custom House closed behind her, Elizabeth Avery stepped out into the night and disappeared into history, a foot of snow on the ground, eleven men shot, and “the Blood of Fellow Citizens running like Water thro’ King-Street.”[15]

*Katie Turner Getty is a lawyer, history enthusiast, and lifelong resident of Boston. She holds an A.A. from Bunker Hill Community College in Charlestown, Massachusetts, a B.A. in History from Wellesley College, and a J.D. from New England Law Boston. She can often be found exploring historic sites both on and off the Freedom Trail.

[7] Judge Trowbridge, “Adams’ Minutes of Trowbridge’s and Oliver’s Charges to the Jury” in Legal Papers, 94.