George Washington’s estate on the Potomac River is one of the most-visited places in the greater Washington, DC area, as befits the home of the Father of his Country.  Just twelve miles south (by road), however, sits an equally impressive 18th century plantation home.  Gunston Hall was the estate of George Mason IV (1725-1792).  Best known as one of the delegates to the Constitutional Convention who in the end opposed the Constitution’s ratification, Mason doesn’t always get his due in the stories of America’s founding fathers.  But, he was a critical and thoughtful voice in forming the early United States government and enshrining its first ten amendments, the Bill of Rights.  Fortunately, his home is open to the public and easily accessible from the metropolitan Washington area.

Like many of the Virginia founders, Mason was born into a family of wealth, largely based on the possession of land and an ample number of slaves to work it.  He also had the good fortune to be a neighbor to one of the most important families in 18th century colonial Virginia: the Fairfaxes.  Lord Thomas Fairfax owned Belvoir, a large estate to the north between Gunston Hall and Mount Vernon.  This gave Mason an advantage in Virginia leadership positions.  He served in the House of Burgesses but appears to have been disinterested in the rough and tumble of political life.  Instead, he preferred the role of homebody, husband, father, and intellectual.  Nonetheless, growing tensions with England brought him back into politics.  He was well educated and well known, so it was common for other leaders in Virginia to turn to him to draft important assertions reflecting their commonly held views about English colonial policy, natural rights, and government.

Mason was an intellectual leader in the assertion of the natural rights of Englishmen, among whom he counted some Americans.  So, it was not a surprise when he became the primary draftsman for the Fairfax Resolves (1774) the Virginia Declaration of Rights (1776) and the Virginia Constitution (1776).  The war forced Mason to involve himself in politics, so he served in the Virginia House of Delegates and worked on Fairfax County issues.  Nevertheless, at heart, George Mason remained a homebody, dictated as much by his personal preferences as a weak constitution and frequent illness.  After the war he roused himself to join the Constitutional Convention, but he considered the original document insufficient to protect individual liberties and came to oppose its ratification.

Mason built Gunston Hall in the latter half of the 1750s.  Like many of Virginia’s older homes, the building is a Georgian-style, center-hall colonial.  Unlike its neighbor to the north, Mount Vernon, it has not undergone significant design or layout changes in the last two and a half centuries.  After Mason’s death, it passed through several hands until being left to The Society of The Colonial Dames of America in the 1930s.  An NSCDA Board of Regents manages the house as a memorial and museum dedicated to George Mason and his times.

On a beautiful spring day in April, my family and I decided to pay Mr. Mason’s home a visit.  We passed the long lines of tourist buses stacked up outside Mount Vernon, glad to be headed in the other direction.  Like Mount Vernon, Gunston Hall sits on a bluff overlooking the Potomac River, which was the main avenue for trade in the area.  It is at the end of a wide peninsula known as Mason Neck, today largely dominated by a regional and state park.   It is one of the few areas in northern Virginia not highly developed, so traffic on the peninsula itself is rather modest, but must be accessed through one of two very busy highways in the region.   The house itself is at the end of long, winding driveway off a two-lane public road, the entrance marked by a modest, but tasteful, sign that almost led us to miss it.  Woods and nature approach close to the edge of the driveway, so the house is not readily visible without first penetrating well onto the grounds.  The driveway ends at a parking lot and visitor center that contains a small museum.  A portion of the museum was closed preparing for a new exhibit on women in Mason’s world, but the permanent installations were accessible to explain briefly the house, lives, and roles of the people who lived there.

Our visit coincided with “kite day,” one of the many events that brings visitors to the site and hopefully stimulates interest in the building, grounds, and first owner.  It meant more people than usual, perhaps, but not so many as to turn a visit to the past into an exercise in dodging tourists, standing in line, or having one’s wallet picked by vendors.  Instead, there were the usual tours of the house, limited to modest numbers at a time, and a series of learning stations for visiting kids.  A local charity provided hamburgers, hot dogs, and the kind of drinks and sides one might find at a church barbecue for a modest price.  In fact, despite its rather extensive grounds and proximity to Washington, Gunston Hall maintains an air of intimacy for its guests.

We were doubly fortunate that kite day marked an opportunity for the presentation of a short, three-person play that took place inside the house.  The actors, in period dress, played Mason himself, a son, and an enslaved servant, Nell.  Most of the performance takes place in the center hall and study, where Mason and his son debate the former’s role in politics, a framework that they use to relate George Mason’s views on a variety of issues to the audience.  Nell has a small part in their discussion but breaks the action to speak directly to the audience, highlighting contradictions in Mason’s political thought, describing the life of an enslaved person at Gunston Hall, and forcing the audience to confront its own thoughts on liberty, democracy, slavery, and race.  The actors appear several times a year, doing several performances each day.  To see Mason engaged in a political discussion and wrestling with the real-world implications and demands that many of his ideas added an extra dimension to the visit. 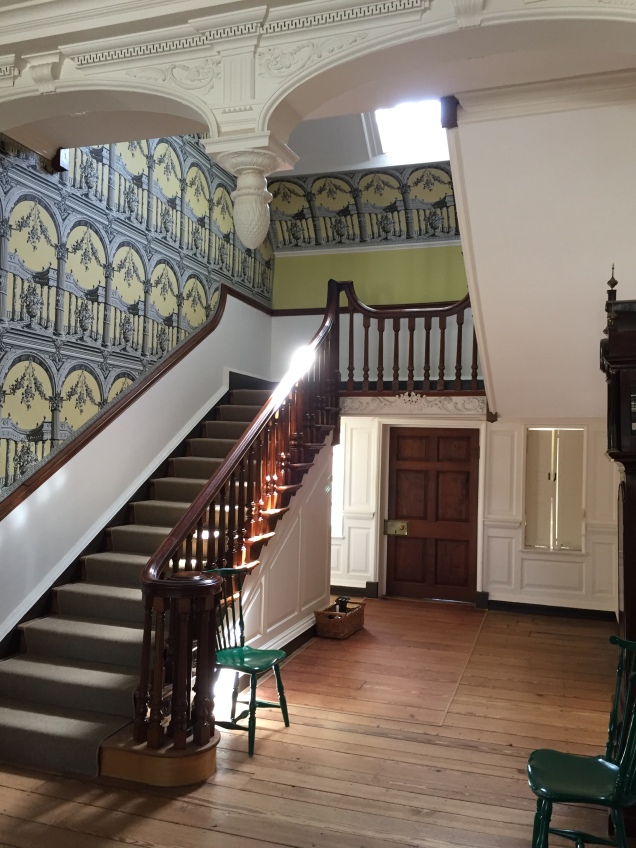 Mason’s gardens were extensive in his day but have not been fully restored.  During our visit, there was a modest archeological dig underway prior to replanting them, but the little work that had been done and the general surliness of the diggers—who we did interrupt during their lunch break—suggests the tiny excavation they had started was more for the benefit of curious kite-day visitors than part of a serious study.  Nevertheless, if and when the gardens are fully restored, they are likely to be among the most beautiful in northern Virginia, well worth a return visit on their own.

Gunston Hall is one of those historic gems in Virginia that may get missed by tourists more familiar with George Washington and the Smithsonian’s vast number of historic treasures.  It’s easily explored in a few hours and boasts several staff who clearly love history and know the Masons as well as anyone can.  It’s the perfect place to while away a few hours, whether interested in George Mason, period architecture, or the lovely grounds.