“It is my father!”: Francis Halkett’s Mission to the Monongahela Battlefield

Two-hundred and sixty-three years ago, July 9, 1755, Britain suffered one of the country’s most humiliating military defeats along the banks of the Monongahela River in western Pennsylvania. Only miles away from its objective – Fort Duquesne – Maj. Gen. Edward Braddock’s army of some 1,400 men was attacked and cut to pieces by a detachment of Canadians and their Indian allies. In several hours of vicious fighting, Braddock’s force sustained over 900 casualties and was sent fleeing from the Ohio River Valley. Among the dead was the commanding officer of the 44th Regiment of Foot, Col. Peter Halkett. 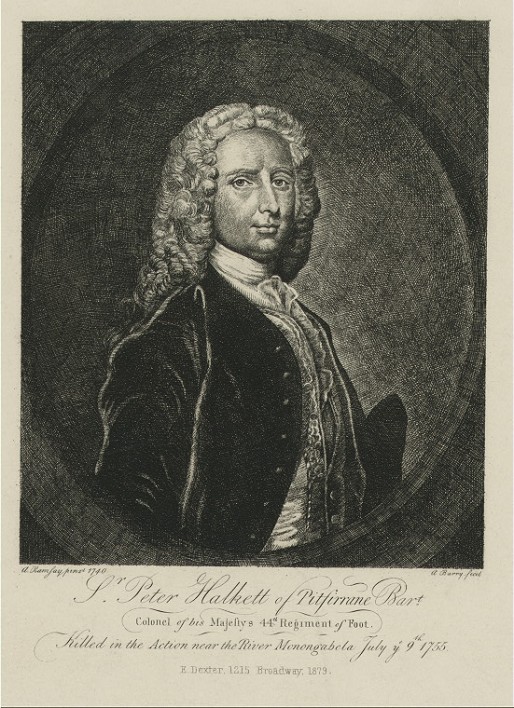 Three years following Braddock’s Defeat, another British Army trudged its way west with its crosshairs set yet again on Fort Duquesne. Accompanying General John Forbes’ expeditionary force was an officer of the 42nd Regiment of Foot, Maj. Francis Halkett – Sir Peter’s son. He had attached himself to Forbes’ command with the desire to return to the battlefield of 1755 and locate the remains of his father and younger brother, James, who served as a subaltern and was also killed in action that day. Because of the army’s hasty retreat, the British dead and dying that could not be carried from the field were left behind. It would be a near impossible task to identify the remains if any could be found, but Halkett was determined to try.

Good fortune provided Francis with an Indian guide who had fought beside the French during the battle and remembered witnessing an officer and younger soldier dying in each other’s arms. With this information in hand, Halkett and a small party of allied Indians and Pennsylvanians under the command of famed artist Benjamin West’s brother, Samuel, set off in October 1758 on a mission to find closure.

The following excerpt describing Francis Halkett’s journey to the Monongahela battlefield is taken from John Gant’s Life and Studies of Benjamin West, Esq., published in 1816. It is a tragic telling of a mournful reunion between father and son, and the true horrors of war:

“After the taking of Fort Du-Quesne, to which the name Pittsburg[h] was given… general Forbes resolved to search for the relics of Brad[d]ock’s army. As the European soldiers were not so well qualified to explore the forests, captain [Samuel] West was appointed, with his company of American sharpshooters [Pennsylvania Riflemen], to assist in the execution of this duty; and a party of Indian warriors, who had returned to the British interests, were requested to conduct him to the places where the bones of the slain were likely to be found. In this solemn and affecting duty several officers belonging to the [42nd Regiment of Foot] accompanied the detachment, and with them major sire [Francis] Halkett, who had lost his father and brother in the fatal destruction of the army. It might have been thought a hopeless task that he should be able to discriminate their remains from the common relics of the other soldiers; but he induced to think otherwise, as one of the Indian warriors assured him that he had seen an officer fall near a remarkable tree, which he thought he could still discover; informing him at the same time, that the incident was impressed on his memory by observing a young subaltern, who, in running to his officer’s assistance, was also shot dead on his reaching the spot, and fell across the other’s body. The major had a mournful conviction in his own mind that the two officers were his father and brother, and, indeed, it was chiefly owing to his anxiety on the subject, that this pious expedition… was undertaken.

Captain West and his companions proceeded through the woods and along the banks of the river towards the scene of the battle. The Indians regarded that expedition as a religious service, and guided the troops with awe, and in profound silence. The soldiers were affected with sentiments not less serious; and as they explored the bewildering labyrinths of those vast forests, their hearts were often melted with inexpressible sorrow; for they frequently found skeletons lying across the trunks of fallen trees, a mournful proof to their imaginations that the men who sat there, had perished of hunger, in vainly attempting to find their way to the plantations. Sometimes their feelings were raised to the utmost pitch of horror by the sight of [skulls] and bones scattered on the ground – a certain indication that the bodies had been devoured by wild beasts; and in other places they saw the blackness of ashes amidst the relics – the tremendous evidence of atrocious rites.

At length they reached a turn of the river not far from the principal scene of destruction, and the Indian who remembered the death of the two officers, stopped; the detachment also halted. He then looked around in quest of some object which might recall, distinctly, his recollection of the ground, and suddenly darted into the wood. The soldiers rested their arms without speaking. A shrill cry was soon after heard; and the other guides made signs for the troops to follow them towards the spot from which it came. In the course of a short time they reached the Indian warrior, who, by his cry, had announced to his companions that he had found the place where he was posted on the day of the battle. As the troops approached, he pointed to the tree under which the officers had fallen. Captain West halted his men round the spot, and with sir Halkett and the other officers, formed a circle, while the Indians removed the leaves which thickly covered the ground. The skeletons were found, as the Indian expected, lying across each other. The officers having looked at them some time, the major said, that his father had an artificial tooth, he thought he might be able to ascertain if they were indeed his bones and those of his brother. The Indians were, therefore, ordered to remove the skeleton of the youth, and to bring to view that of the old officer. This was immediately done, and after a short examination, major Halkett exclaimed, “It is my father!” and fell back into the arms of his companions. The pioneers then dug a grave, and the bones being laid in it together, a highland plaid was spread over them, and they were interred with the customary honours.”[1]

1 Response to “It is my father!”: Francis Halkett’s Mission to the Monongahela Battlefield