The Battle of the Clintons

This past spring I was able to visit a fascinating historic site, one that is largely overlooked in the larger story of the Revolution. Many of us know that in 1777 the British planned to use the Hudson River to cut off New England from the other states.

With General William Howe in New York City, and General John Burgoyne moving south from Canada, the plan seemed destined for success. Yet Howe decided to move his army by water to the Chesapeake and advance on Philadelphia.

It is commonly assumed that his lack of cooperation with Burgoyne was one major reason for the latter’s failure, and surrender, at Saratoga. In fact, a force of British troops did ascend the Hudson, hoping to cooperate with Burgoyne. I was able to follow and retrace the little known expedition.

While Howe took the bulk of his army to the Chesapeake, he left a garrison in New York City: 7,000 troops under General Henry Clinton. By September Howe had defeated Washington at Brandywine and captured Philadelphia. However, Burgoyne was in trouble at Saratoga: his army had been fought to a standstill on September 19. The flamboyant General pulled back, digging in and hoping for assistance from another quarter. He wrote to General Henry Clinton in New York pleading for help, which was received there on September 29. On October 3, Clinton sailed north up the Hudson.

Two American forts stood in the way of the British relief force. The garrison of Fort Clinton was about 600 men under the command of General (and governor of New York) George Clinton. His brother General James Clinton commanded at Fort Montgomery (named for the American general killed early in the war at Quebec). Neither of the American Clintons were related to the British general. On the east side of the river near Peekskill, General Israel Putnam had another 600 troops.

General Henry Clinton kept Putnam guessing as to his intention, using several feints, then suddenly landed his 2,000 British and German troops on the west side of the river on October 6. The men faced an arduous march over rocky, hilly terrain to get at the two American forts. Dividing his forces and dealing with unforgiving terrain, the British were able to attack both forts simultaneously.

In the meantime at Saratoga on October 6, American troops were preparing to assault the British and Germans of Burgoyne, who had pulled back and dug in. But back to the action on the lower Hudson. Taking advantage of the terrain, Fort Clinton’s earthworks were built following the contours of the ground, and seemed impregnable. The ground was extremely rocky, and I could not imagine the difficulty of digging here.

Only about 100 men defended Fort Montgomery. General James Clinton sent his troops out to slow the British advance, engaging them twice before they fell back to the main fort. The delay put the British well behind schedule, and only an hour of daylight remained when the attack began.

The British overwhelmed the outnumbered defenders. They also assaulted it from its land side, weaker than the river side. Attacking regiments included the 52nd, 57th, and Loyalist units like the Long Island Volunteers and New York Volunteers. General James Clinton narrowly escaped a British bayonet, his orderly book deflected the weapon’s point. He and some of the garrison escaped, fleeing into the woods to the north. Many defenders were killed while trying to surrender.

Fort Clinton was the larger and stronger of the two posts. Henry Clinton sent the 63rd Regiment to attack the fort over flat ground from the northwest, while the 7th and 26th, along with Anspach Grenadiers, assaulted the fort head on across open ground and through obstructions of abatis.

Also overwhelmed, the defenders here either surrendered, or scrambled over the works, down to the water, and escaped across the river on boats. Governor George Clinton was among those who made it out. 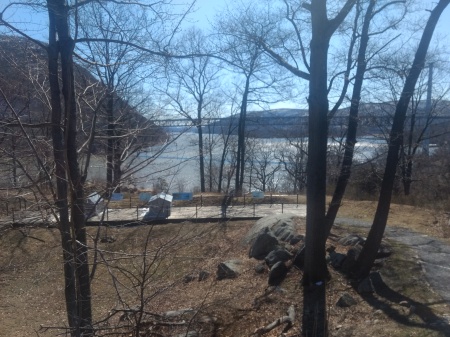 The British lost 41 killed and 142 wounded, the Americans lost about 75 killed and wounded, with 263 taken prisoner. Having taken the two forts, General Henry Clinton left small garrisons there and continued moving north. It was over 140 miles to Saratoga.

The very next day, October 7, the Second Battle at Saratoga, Bemis Heights, took place, with the Americans driving the British from all points. Burgoyne retreated ten miles to the north, his men on short rations, ragged, and exhausted.

On October 13, Burgoyne held a council of war with his generals. Outnumbered, surrounded, cut off from reinforcement or resupply, and not knowing of developments to the south, there seemed no choice but surrender. Negotiations began with American commander Horatio Gates.

Vaughan’s British troops marched into the capital of New York State, Kingston, on the 16th. Considered a “hotbed of perfidy and sedulous disloyalty to King George the Third and His Majesty’s Parliament,” they punished the town by destroying supplies and burning nearly every building, over 300 in all. After burning Kingston, Vaughan continued up the Hudson, coming with 45 miles of Albany before encountering about 5,000 Americans.

On October 17, Sir Henry received a request for 3,000 men from General Howe to support the occupation of Philadelphia. The very same day the British and German troops of Burgoyne’s army surrendered at Saratoga. As the New York City garrison was already thinned by the operation on the Hudson, Clinton recalled Vaughan and the garrison holding the two captured forts. The British destroyed the forts and left on October 26.

Could the British have been more aggressive and done more to help Burgoyne? Perhaps. I never knew of this expedition or how close they came to reaching Saratoga.

The Grand Battery of Fort Montgomery dominates the river with an impressive view. Walking trails take visitors past important sites like barracks, the guard house, and the magazine.  Historic markers discuss archaeological findings and the historic events at key spots.

If you ever find yourself in the area, take the time to visit Fort Montgomery.

2 Responses to The Battle of the Clintons