Propaganda, imperial ambitions, and one small ear caused a flare-up in the New World between the European powers of Great Britain and Spain. In one of the most comical, bewildering, and interesting causes for war, the conflict known as the War of Jenkins’ Ear began eight years after the incident itself. The connections that this conflict would have with the successful outcome of the American Revolutionary War is what is most striking.

In 1731, Robert Jenkins, a British merchant captain and known smuggler had his vessel boarded by Spanish coast guards. This is when the root cause of the conflict, the infamous ear, was severed. Yet, response by the British was lukewarm and not until eight years later in 1739, did British opposition leaders take up the cause of the ear and use it to spur outrage against the Spanish. Behind some of these government leaders in Parliament was the powerful British South Sea Company, a joint-stock company formed in 1711 to facilitate trade with South America.

The impetus for war was the hope that a successful outcome would advance British interests and trade possibilities in the Caribbean world and to force Spain to adhere to the asiento contract which allowed British slave traders to sell their slaves in Spain’s American colonies.

Three years after the war began, the local conflict in the Caribbean and South America spheres was consumed by the larger War of the Austrian Succession in Europe. However, this largely ignored conflict in the Americas had two lasting affects.

First, this was the first conflict that colonial American troops were raised and put “on the Establishment” aka became part of the regular British Army  and used to fight for the British crown outside North America. In one of those regiments a young Washington served and saw battle for the first time.

With the mere mention of the name “Washington” one is probably connecting the name “George” with it and thinking that this author has goofed in his memory of wars. Yet, that would be incorrect.

The Washington that served in this conflict was Lawrence, the older half-brother of George and the one who would assume a fatherly figure over George after the passing of their respective father in 1743.

Lawrence would serve in a regiment raised from the colony of Virginia that numbered approximately 4,000 and was led by this Washington. This unit was part of the largest action of the entire conflict when they were ordered to attack Spain’s main gold-trading ports in South America; Cartagena de Indias, known as Cartagena, Columbia today.

Guarding the city was the impressive Castillo San Felipe de Barajas which still stands today. Although, the British did assault the works but were repulsed by a spirited bayonet counter charge by the Spanish defenders. In the prelude to the landing of the British soldiery the navy fired on average 62  shots per hour at the Spanish defenses.

After this initial unsuccessful frontal assault on March 13, 1741 the British commander, Admiral Edward Vernon tried both a naval bombardment and a blockade to try and force the surrender of the Spanish.  After a month of the blockade and being unable to land another assault force, the British raised the siege on May 9 and returned to the island of Jamaica. There would be other campaigns in the war and the conflict would not conclude until 1748 with the Treaty of Aix-la-Chapelle.

Lawrence Washington did not take part in the assault of March 13th, but, like most of the soldiers, he was confined to one of the ships. The overcrowding and dwindling of supplies and the heat of the southern Caribbean life on the ships for the siege became unbearable. Disease broke out, mainly yellow fever, and scores of soldiers succumbed to the illness.

However, it is believed that none of these negatives and horror stories made their way into the telling of Lawrence’s account of his military service when he returned to Virginia and told his younger brother. Would you tell your younger brother that all you did in the war was sit on a ship, watch other men fight, eat salted meat and try not to die from a tropical disease?

To add to his military accomplishments, Lawrence named his residence in honor of the British commander of the expedition, naming his estate Mount Vernon.

Yet, Lawrence never fully recovered from his service and within ten years of returning and suffering years with what is now known as tuberculosis, the 34-year old half-brother of George died at Mount Vernon in July 1752.

Thus, a colonial era squabble over the severing of someone’s ear, prompted the service of a Washington, who passed on his experiences in such a light to attract the attention of a 10 or 11-year old younger brother, and planted the seed for following in his father-figure’s footsteps to a more successful and complete military service. This was the first war stories, the first accounts George had of the status that British military service gave to colonials, and it is safe to say a young George would have taken note and vow to be like Lawrence and why wouldn’t he? A  plantation owning, British military commissioned officer who was a staple of his society.

The links and lessons of history can come from some strange happenings, can’t they?

*This past February, the author had the chance to visit Cartagena, Columbia and tour the fort while also taking a cruise of the port to approximately view the stone walls from the vantage point of Lawrence Washington. Pictures are below.* 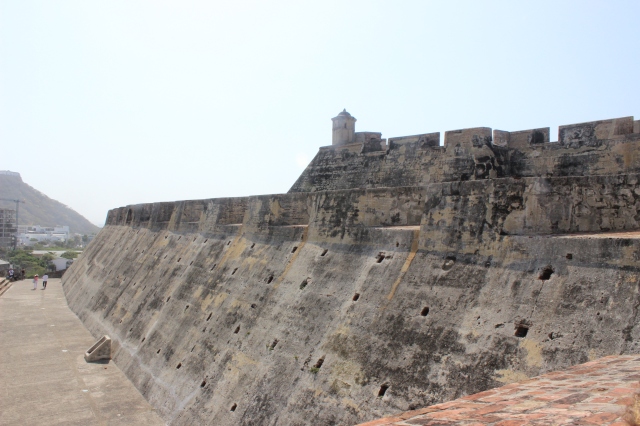