The rectitude of the decision John Champe made on that October night to “desert” his men and “join” the British must have weighed heavily on his mind as he approached the Hudson River. The mission, offered by “Lighthorse” Harry Lee, to capture the traitor Benedict Arnold was a serious one. The only hesitation Champe felt was how his reputation and honor would be injured by his desertion.  No one but Lee and Washington could know the truth, the success of the mission counted on secrecy.[i]

As Champe reached the Paulus Hook area of the Hudson River, the details are murky. Some accounts have Champe jumping into a boat along the shore and pushing off into the river and rowing to a British war ship. Other claims have Champe clearing a British patrol along the river and escorted by the patrol to a nearby ship. [ii]  Either way, Champe eluded his American pursuers and accomplished the first goal of his mission, to reach the British lines.

Lee, already having established a spy network, lined up a system of couriers to communicate with Champe. By October 25th, Lee had heard from Champe and wrote to Washington that “my friend got safe to New York; he was before Sir Henry Clinton and has passed all the forms of the garrison; he accidentally met General Arnold in the street which has paved a natural way for further acquaintance; the party entertains high hope of success…”[iii] 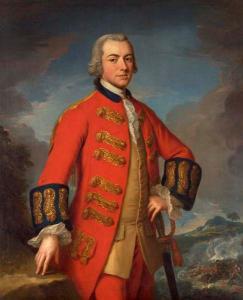 join the British army. Champe, a modest officer in a fabled unit was just the kind of man that Clinton wanted to attract. The fact that Champe was fleeing his own men who were in hot pursuit of him made the deception complete. Clinton questioned Champe about the condition of the American army and morale.  Champe informed Clinton that other officers were sure to desert and Washington’s ranks were thinning with men heading home. Clinton soon trusted him to be a deserter and attached him to a unit of Loyalists that Arnold was raising.[iv]

Champe became close to Arnold and spent a lot of time with him. Champe spent a lot of time at Arnold’s headquarters at the King’s Arms Tavern on Broadway in New York City. He would take the next several weeks to study Arnold and his habits. Champe also watched for other deserters joining the British army in New York. The fear by Washington was that Arnold was acting with other American officers in defecting. Soon Champe realized that Arnold had acted alone in his treason.

Finally in early December Champe informed Lee that his plan was to kidnap Arnold one night as Arnold took his nightly walk in a garden next to his headquarters. Champe was even able to recruit fellow patriots to assist him in the kidnapping of Arnold. On the selected night, Champe would have a boat waiting for him at a nearby landing. He also had loosened some of the fence boards around the garden area so he could sneak Arnold out of the garden. After getting Arnold onto the boat, Champe would take him to Hoboken (western side of the Hudson River). There Lee and three of his dragoons would wait for Champe and his cargo.  Washington insisted to Lee and then to Champe that Arnold was not to be harmed. Champe was sure of his success and spent days and weeks in planning the capture of Arnold. [v]

As the evening approached, everything was in place. He had earned the confidence of Clinton and Arnold. He was now a sergeant in the British army and spent countless hours preparing and making the necessary connections to fellow patriots in New York.  The boat was prepared and waiting, Lee would be at Hoboken with his dragoons.  Everything was in place to bring home the traitor Arnold.