As British General Thomas Gage and his American Whig (or Patriot) antagonists squared off in Boston and the surrounding towns, information gathering became the key to success. Both sides had created networks of spies, but the advantage was clearly in favor of the Whigs. During the winter 1774-1775, groups such as the Sons of Liberty had established a complex spy network within Boston comprised of a system of riders that spread information and “alarms’ quickly. The Committee of Safety and the Massachusetts Provincial Congress relied on this network to stay informed of what was going on in Boston and the British intentions.

After he was thwarted in Salem in February,  Gage continued to look for a way to disarm the growing threat from the Patriots. He sought two volunteers to go out on a scouting mission to the town of Worcester, Massachusetts. Captain John Brown and Ensign Henry De Berniere volunteered for the task. Worcester was known as a hotbed of Patriot activity as well as a supply depot for the Provincial Congress. Their mission was to take notice of the roads to Worcester including landmarks and waterways. Another goal was the creation of maps of the area as well as try to locate where Patriot leaders were storing arms and gunpowder. The men set out late February on an adventure that proved just how dangerous things had gotten around Boston.

Quickly these two men raised suspicions wherever they went. As they went further away from Boston, it was no secret that these two were not locals nor surveyors as they claimed. At local taverns they were seen as outsiders and when they interacted with the locals, it was obvious they were not random travelers. At one tavern, a female tavern worker was drawn to them. They commented to her about how “fine” the countryside was around the tavern. She quickly commented to them that “we have great brave fellows to defend it.”  Shocked, the men continued on to the Golden Ball Tavern. Known a as a Loyalist hang out, they received better treatment there, but were warned to not go further. They continued to do so, staying mostly at Loyalist taverns. Finally reaching Worcester, they quickly drew maps of the region and just as quickly made their way back to Boston. A portion of the way they were followed by men who were keeping an eye on them. 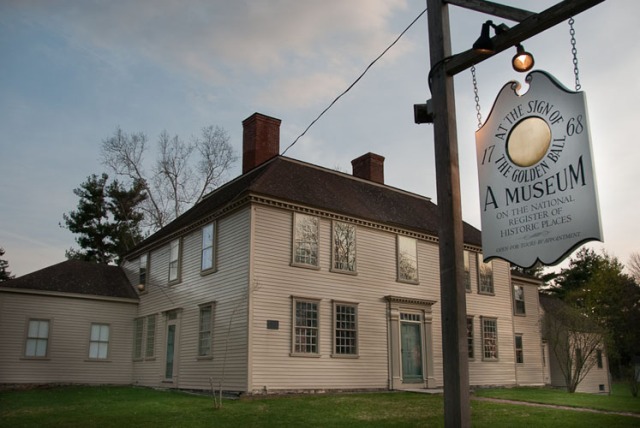 The Golden Ball Tavern still stands today on the old Boston Post Road. A Loyalist establishment, Brown and Berniere sought refuge here on their to Worcester.

They returned to Boston with bad news for Gage. Worcester could only be reached by difficult roads and several natural features along the way lent themselves to traps set by the militia. Plus, as the two men experienced, the locals around Worcester were very interested in resisting British rule and open about their intentions. Worcester was too dangerous for an expedition, but Gage did not give up and began to look elsewhere to strike. He sent Brown and De Berniere out again, this time to the village of Concord. Much like Worcester, Concord was a hot bed of Patriot activity. Here the Provincial Congress formed and met often. Concord also reportedly held mass supplies for the colonial militia, arms, and supposedly cannon (some of which were stolen from the British in Boston the previous fall, much to Gage’s embarrassment). The two riders took roads from the Boston Neck, then up to Weston along the Concord Road. They met a Loyalist in Concord who showed them another way back to Boston via the Lexington Road via Lexington and Menotomy. Though longer in distance, they determined the route was easier and safer.

A close up of the map attributed to Brown and Berniere, showing the village of Concord with their comments “This town is well inhabited and on an entire plain. A Shire Town and great thoroughfare, the roads wide and fit for an encampment.” (Library of Congress)

Gage focused his intelligence gathering operations around Concord. With the Provincial Congress meeting there, his informant Dr. Church was invaluable. Church was a trusted member of the Congress. Gage also learned that Patriot leaders, John Hancock and Samuel Adams were staying in nearby Lexington. Soon orders arrived from London for Gage to act militarily against the Patriot leaders. With the information gathered by Brown, Berniere, Church and others, Gage determined that his objected was Concord.

The story of the events of winter and spring 1775 can be found in the newly released book “A Single Blow: The Battles

of Lexington and Concord and the Beginning of the American Revolution” By Phillip Greenwalt and Robert Orrison.