Summer Lecture on Summer of 1787

Posted on September 30, 2018 by Phill Greenwalt

This past July I had the pleasure to attend and present at the American Battlefield Trust Teacher Institute. One of the keynote speakers was David O. Steward, the author of Summer of 1787: The Men Who Invented the Constitution. During his talk, there were a few points that stuck out to me and I share them with you. 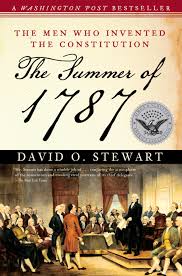 In reference to George Washington, Stewart candidly remarked he had “more influence by keeping his mouth shut” almost as if by his calm, quiet demeanor, he was displaying that “I trust in you and I’ll try and make it work” with whatever the delegates designed in that hot and stuffy room in Philadelphia.

Yet, in his “breathy, shallow voice” Washington had a say in shrinking the size of congressional districts.

Being a lawyer by trade and spending a good portion of his life on researching the men and the document, Stewart picked out three delegates that he thought were major influences during the Convention.

John Rutledge, of South Carolina, whom Stewart referred to as an “unsung hero” was on the most committees (five) and chaired the most (three), including the Committee of Detail which was tasked by mid-summer to putting down all the points agreed upon up to that point by the Convention.

James Wilson, of Pennsylvania, was the author of the “creative, cringe worthy” amendment that constituted the Three-Fifths Clause, where African-American slaves would be counted as “3/5th” of a person when determining the state population for legislative representation in Congress. 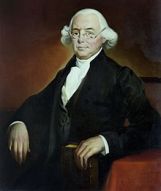 Furthermore, Stewart said having a conversation with Wilson was compared to “being occupied by a foreign country” during the dialogue exchange.

The third of the unsung heroes in Stewart’s estimation was Gouverneur Morris, who, in a bit of foresight, eloquently stated that the United States Constitution merely “picked at scab of slavery.” He is a proponent of the agreement to end the slave trade within the next two decades of the Constitution in two days he writes the entire U.S. Constitution, shrinking the original by 45% by simplifying the 18 articles into seven for consistency purposes.

Thus, as September ends, which in 1787 saw the U.S. Constitution signed by those 39 gentlemen in Philadelphia, I thought sharing the notes from Stewart’s talk would be a fitting ending to this pivotal month in American political history.

For those that have not read Stewart’s book, I do recommend it, as it provides a good foundation for understanding the creation of the U.S. Constitution and the men who “invented it.” For those that have read it, feel free to share your thoughts in the comment section below!