On the morning of March 15, 1783, George Washington strode into the “New Building” or “Temple” as the structure was referred as, to address the assembled officers of the Continental Army. He asked General Horatio Gates if he could have the floor to say a few words and when he unfolded his pieces of paper on the podium, the words lost their importance.

Washington, according to some historians, had crafted the entire episode of speaking in front of the assembled officers. An anonymous letter, later attributed to an aide to Gates, had made the rounds of camp five days earlier. In this communique, the officers described the army’s current deplorable condition, lack of support from the Continental Congress, and pushed for an ultimatum to be sent to that political body. A meeting had been initially scheduled for the following day. Washington issued general orders the next day calling for a meeting on the 15th. The Continental Army commander implied that he would not attend but the senior officer in camp would preside over the gathering. 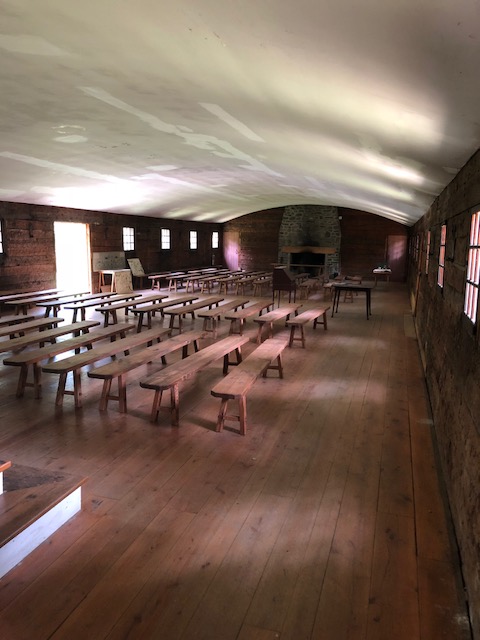 View inside the “Temple”

This prompted a second letter to make the rounds of camp on the 12th of March. This quick turnaround and appearance of another letter prompted Washington to realize that the machinations resided within his officer corps. Hence his need to be there for the meeting on the 15th.

Washington presented, in his usual style, a rather short speech, very impassioned, citing that “wickedly attempts to open the floodgates of civil discord and deluge our rising empire in blood” should be resisted. As he pulled out a communique from Congress, Washington gave a short pause and slowly removed from a pocket a pair of reading glasses.

He looked out at the assembled officers and stated;

“Gentlemen, you will permit me to put on my spectacles, for I have not only grown gray but almost blind in the service of my country.”

The realization of how much Washington had suffered in the cause, through these admissions of age and worsening eyesight moved the officers to tears. Many in the room had worked with Washington, served with him, or attended councils of war, none of them realizing during those times the extent that Washington had physically given to the cause of American independence.

With the conclusion of the speech, Washington excused himself from the room. General Knox spearheaded a resolution affirming the loyalty of the gathered officers and a committee was appointed to draft a suitable resolution.

Through his actions, Washington gave a speech that the words of many cannot recite. But, the action and solemnity of the situation and presentation, made those nine-pages, his greatest speech.

A side view of the “New Building” or “Temple” reconstructed at New Windsor Cantonment State Historic Site,

*To peruse the Newburgh Address, click here, courtesy of our friends at George Washington’s Mount Vernon.

*One can visit the site today, as part of New Windsor Cantonment State Historic Site, click here for details.