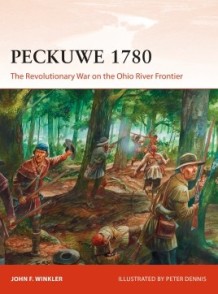 I once read a review comparing Osprey Publishing’s monographs on particular battles, weapons, uniforms, or campaigns to “flash cards,” which made me smile.  As a kid, I somehow acquired stacks of flashcards laying out the technical specs of various military aircraft or ships and thought they were the greatest things since sliced bread.  Those were the days before Amazon or Barnes & Noble, when a kid had to depend on the local library and Waldenbooks for books about history, which they didn’t have in large numbers.  The Osprey monographs were a windfall of sorts when the local library started carrying them.  They’re not intended for an academic audience by any stretch, but can play a useful role in interesting popular audiences in places, people, and events that might otherwise prove too obscure or too intimidating for a young or casual reader.  So, when I came across John F. Winkler’s new monograph for Osprey, Peckuwe 1780, I snapped it up as much for sentimental reasons as for my interest in the American Revolution on the western frontier.

Peckuwe 1780 summarizes Colonel George Rogers Clark’s campaign against a mixed force of Delaware, Shawnee, Mingo, and Wyandot Indians at the town of Peckuwe on the Mad River in southwest Ohio.  Clark commanded just under a 1000 militia gathered from Kentucky (then a county in Virginia) and his conquests in the Illinois country.  He faced fewer than 500 Native Americans, commanded by Catecahassa (Black Hoof) and subordinate chiefs from each of the tribes in his mixed force.   Two of the loyalist Girty brothers, Simon and James, joined the Indians.

Frontier warfare followed a pattern during the American Revolution.  Native Americans raided isolated frontier farms and towns, killing and capturing settlers, slaughtering livestock, and burning crops, often employing terror to cause whites to flee the frontier.  American forces led punitive expeditions against Indian farmlands and hunting grounds, seeking to drive Native Americans away from their means of living and back onto British supply depots, where warriors would be more concerned with feeding their families than conducting raids across the frontier.  Neither side hesitated to use brutal tactics considered horrifying in the more settled Atlantic coast.

Clark’s campaign, launched in late July 1780, was a spoiling attack, meant to force the Native Americans living at Peckuwe and Chalawgatha away from their ripening corn fields, which Clark would then burn, along with storehouses and any buildings he could find.  Both villages had served as bases for Indian war parties attacking Boonesborough for years.  Kentuckians hoped that their permanent destruction would provide lasting relief for the Kentucky settlement, at least for the fall of 1780 and perhaps the winter and spring of 1781.

Clark’s scratch army, collected from across the frontier in the prior month partly to counter a British and Indian force that had marched south earlier in the summer, reached Chalawgatha first on August 6th.  The town was abandoned, so Clark took time to re-provision his army and burn most of the fields while the Indians gathered at Peckuwe.  The Indians were well aware of Clark’s advance; scouts had been tracking it while it moved along the Ohio in July.  But, Clark had scouts as well and both sides were generally aware of the others position.  Still, the Indians delayed ambushing Clark on the advance while they awaited reinforcements. Clark arrived outside Peckuwe on August 8, forcing the Native Americans to scramble and assume defensive positions. They began by killing most of their male captives and squirreling away their captured women and children.

Clark’s immediate problem was getting across the Mad River to reach Peckuwe, which was also protected by a three-sided stockade.  He hoped to hit the Indians from several directions, effectively launching a counter attack against the ambush he anticipated.  It was a complex plan, sure to make George Washington proud.  Although some things went awry, Clark’s militiamen largely pulled it off, crossing the river and clearing the way to Peckuwe while the Indian warriors withdrew to a ridge on Clark’s left with the cornfields and village on his front and right.  Clarks’ forces eventually forced the ridge, which had been improved with a loose log breastwork, and then used a single piece of artillery to drive the Indians back into the town and their fort.  In the evening, the Indians sallied around the American left flank, hoping to capture the gun, but Clark anticipated their attack well enough to repel it.  The Americans then reduced the fort and set to driving the Indians from their town in the frontier-equivalent of house-to-house fighting.  Clark remained cautious, alternatively firing solid to destroy a house and then switching to grapeshot to kill defenders as they evacuated.  By dusk, the Indians had decided to give up the town and retreated. Clark had won the day.

Peckuwe 1780 follows a format that Osprey has standardized for its battle histories.  It begins with a background to the campaign, which is basically a quick examination of the war in the west to 1780, mainly built around the story of the war in Kentucky. Succeeding chapters identify the commanders and lay out the forces at their disposal, discuss each side’s plans, and then tell the story of the march to Peckuwe and the battle itself. A very brief concluding chapter summarizes the aftermath, all the way to Clark’s death.  A two-paragraph epilogue of sorts identifies the location of the battle, which is now a park, and lists some of the other sites that are open to public visit.  It does not include anything like a tour of the area.  The entire text runs 96 pages, including a 1/3 page bibliography and two-page index.  Brevity necessitates leaving out a lot of detail and analysis and there are no footnotes, which is usually how Osprey publishes its books and monographs for popular consumption.   This is unfortunate since Winkler uses several direct quotations from the battle’s participants.  That said, and knowing those kinds of weaknesses generally exist in Osprey’s monographs, Winkler has produced a nice work.  As usual with this kind of Osprey product, it contains dozens of illustrations, including photographs of battle sites and artifacts contained in various museums, as well as regional and tactical maps that help a reader follow events in broad strokes.  It is easily read in one sitting and ensures that a Revolutionary War battle and the people who fought it do not merely become footnotes in someone else’s story.