I’ve been intermittently visiting Winchester, VA for years, usually with an eye toward understanding its place in the Civil War.  Tradition has it that no town changed hands more frequently. But, the town also has a prominent, if sometimes overlooked, role in America’s colonial and Revolutionary War history.  In particular, it enjoyed a close relationship with George Washington and Daniel Morgan, helping shape both men.

Winchester, or Frederick Town, as it was then known, was the largest village in the lower Shenandoah Valley when Lord Thomas Fairfax decided to relocate from England to his land grant in northern Virginia and became a way-station of sorts for people traveling along the Great Wagon road that ran from Pennsylvania to North Carolina in the 18thcentury.  So, when the Fairfax family hired a teenaged George Washington to help survey its grants in the Shenandoah, Winchester was a logical place for the surveying team to make its temporary home base.  (In truth, surveying teams were constantly moving to maximize their efficient use of time: the saddle might be considered home.)  While the teenager was less than impressed with most accommodations on the frontier, he was pleased with Fredericktown.  He recorded in his diary:

“[We] Travell’d up to Frederick Town where our Baggage came to us,  We cleaned ourselves (to get Rid of the Game we had catched the Night before) & took a Review of the Town & then return’d to our Lodgings where we had a good Dinner prepar’d for us Wine & Rum Punch in Plenty & a good Feather Bed with clean Sheets which was a very agreeable regale.”[1]

Later, when he had enough money, Washington would begin to make his first land purchases in the area.  During the French and Indian War, when Washington commanded Virginia’s armed forces, he made his headquarters in Winchester.  He also won his first election to the House of Burgesses from Frederick County, of which Winchester was the seat.  Winning involved purchasing and liberally spreading a large amount of alcohol among potential voters.  Today, there is a small museum in town dedicated to his relationship with it, both as a surveyor and, later, as a military officer. 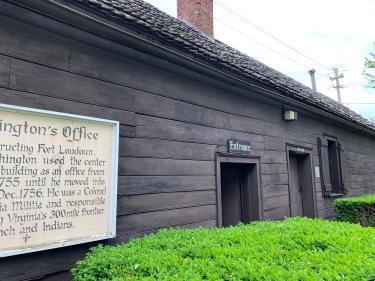 Washington, however, was not the only Revolutionary War officer who had a close relationship with Winchester.  Although he was born in New Jersey, Daniel Morgan spent most of his life in and around the frontier town, arriving in the spring of 1753.  Biographer Don Higginbotham described Winchester this way: “What it lacked in size, it made up for in noise.  Cursing, drunkenness, quarreling, and fighting were so prevalent that Moravian missionaries and other pious souls skirted it during their travels through the back country.”[2]

Unlike Washington, who had enjoyed some of the finer things and the high-level social, economic, and political connections that gave him a leg up in the pursuit of status, Morgan arrived in Winchester dirt poor. He had the same work ethic, however, and sought to improve his lot in life with similar passion.  He earned enough money to go into the “wagoning” business, basically hauling goods up and down the Great Wagon road.  He even joined Major General Edward Braddock’s ill-fated expedition against the French at the Forks of the Ohio during the French and Indian War.  There, he may have met a slightly older George Washington, who fell ill during the advance and had to ride among the wagons at the rear for a time.

Morgan fit right in with the rough and tumble of the frontier.  Unlike Washington, who was obsessed with protocol, Morgan was no fan of rank and struck a British officer who had angered him.  The act resulted in 400-500 lashes, normally a fatal punishment. He, of course, survived and began building a legend.  Eventually, Morgan married and bought a farm east of Winchester, near today’s Berryville. It was even rougher than Winchester in the 18thcentury and went by the name, Battletown, allegedly after the streetfights that frequently broke out near the village’s many taverns. Nevertheless, much of Morgan’s time and attention would have been pulled to Winchester, which remained the center of economic activity in Frederick County.

There is no need to recount Morgan’s extensive service during the Revolution.  With its conclusion, he returned to the area, settling in nearby Charlestown, now in West Virginia.  Morgan eventually won election to the U.S. House of Representatives, but in declining health, he moved to his daughter’s house in Winchester and died in 1802.  He is buried in Mount Hebron Cemetery north of town.  On this Memorial Day, as we pay respects to those who have made the ultimate sacrifice for the country, give a thought to Dan Morgan and Winchester.