St. Louis, Missouri is considered the gateway to the west for the United States beginning in the 19th century. In the 18th century, St. Louis was not on the radar of many in the burgeoning United States. 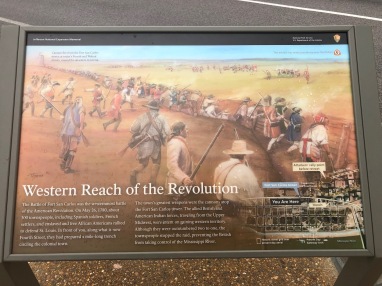 However, the westernmost engagement of the American Revolution unfolded in the town of St. Louis, crushing British designs to conquer the territory from the Spanish, who were allied with the French and thus the United States.

On May 26, 1780, a hodgepodge force of 300 townsfolk, free and enslaved blacks, French settlers, and Spanish soldiers rallied to defend their town from the advance of a combined British and Native American force.

The Native Americans, whose numbers included warriors from the Sioux, who made up the largest number with 200, being joined by Chippewa, Menominee, and Winnebago, with various other tribes from the local area committing forces as well. Altogether the warriors numbered around 750 to 1,000 accompanying the former British fur-traders turned  militia, which numbered approximately 20. Chippewa Chief Matchekewis was the overall commander.

Fort San Carlos comprised a single tower, approximately 30 to 40 feet, with trenches extending to the river. The initial plan had called for the construction of four stone towers altogether but time and resources limited the fort to just one. Artillery taken from another nearby military installation allowed for  three 4-pound and two 6-pound cannons to be mounted in the tower with various other caliber artillery pieces on either end of the trench line. The Spanish commander of St. Louis, an already important trading hub on the grand Mississippi River, Lieutenant Governor Fernando de Leyba had taken advantage of information gleaned from another fur trader that had brought news of the impending strike by the British and their Native American allies. 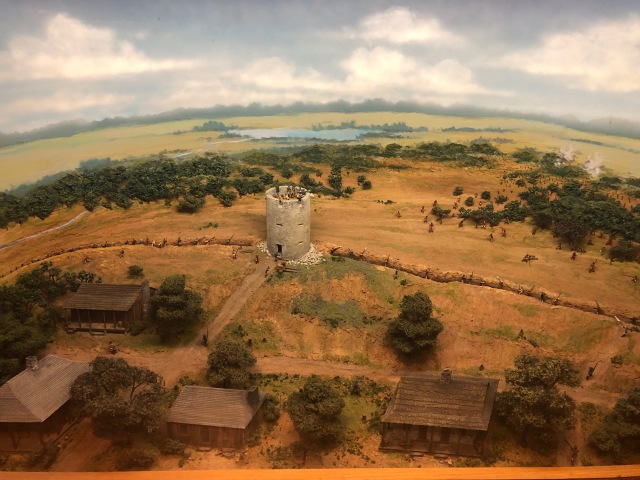 Model of the Battle of Fort San Carlos fought on May 25, 1780, in the Old Court House in St. Louis, part of the national park. (author collection)

Then, on the eve of battle, an appeal to Francois Valle, a French inhabitant and former militia captain located 60 miles away bore fruit. Valle sent to St. Louis his two sons and 151 trained and equipped French militia men plus extra lead for musket balls. To honor his selflessness, King Carlos III of Spain, by royal decree, on April 1, 1782 gave Valle the rank of lieutenant in the Spanish army, effectively making him a Spanish don.

On May 25, 1780, the British and Native Americans struck the former British outpost across the river from St. Louis at Cahokia, currently occupied by Virginian militia with a force of 300 men. Meanwhile, an attack on Fort San Carlos commenced as well with Leyba taking a position in the tower, giving him as clear a view of the impending battlefield as possible.

Indians from the Sac and Fox tribes immediately fell back with the first fire from the fort and trench line and refused to advance or partake in anymore of the engagement. The Wapasha and Sioux tried to entice the defenders out from their defensive emplacements to no avail. Having no luck, the warriors made a public killing of captives found on the approach to Fort San Carlos. Still, Leyba was able to keep his force from sallying out and playing into the hands of the enemy.

With the attack also failing on Cahokia, with the presence of George Rogers Clark aiding in the morale of the forces there. When news broke of Clark’s arrival, the Native Americans refused to continue to advance. The twin repulses of the combined British and Native American force withdrew, burning crops and buildings along with taking livestock on their retrograde movement.

Although small in stature, with less than 100 killed, mostly civilians caught on the approach of the British and Native Americans, the engagement at Fort San Carlos ruined  English designs for controlling the Mississippi River. 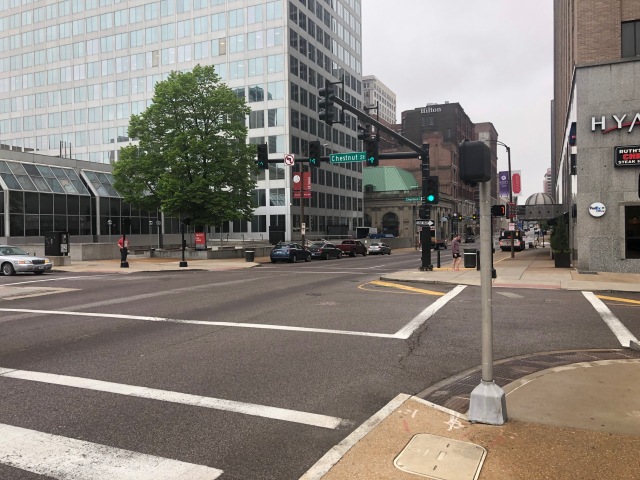 Modern street view in the direction of the British and Native American advance toward Fort San Carlos and the connecting trench line. (author collection)