part one of two

The rolling hills and dale that make up the Oriskany Battlefield look bleak and washed out on this overcast day. The battle took place in the full flush of August green, but I visit on a dreary off-season day. The battlefield sits next to state route 69, which winds through a rural part of upstate New York that, itself, looks time-forgotten.

The most prominent feature of the battlefield is the tall needle-like obelisk, dedicated on August 6, 1884—the 107th anniversary of the battle. The battlefield received formal protection from the state forty-six years later, in 1927, on the battle’s sesquicentennial. Initially comprised of five acres, the park now includes 70 acres, with the old Erie Canal running along its northern border. 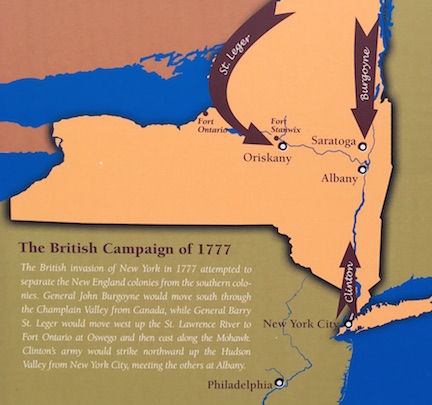 The battle of Oriskany has its origins at Fort Stanwix, As part of a three-pronged movement to cut off New England from New York, British forces under Maj. Gen. John Burgoyne marched south along Lake Champlain and the Hudson River toward Albany, while forces under Gen. William Howe were to march north from New York City to meet them. A third column under Gen. Barry St. Leger was to converge with them by cutting down the Mohawk Valley.

St. Leger ran into resistance at Fort Stanwix, however, and so laid siege to the fort.

Colonial Brig. Gen. Nicholas Herkimer, determined to bring relief to the besieged fort, assembled a force of 800 militiamen and some 60 Oneida warriors and marched to the fort’s aid. St. Leger assembled a counterforce of some 450 men to march out to meet Herkimer on the road. The British force consisted of Sir John Johnson’s King’s Royal Regiment of New York—a unit of loyalists—and a number of Mohawk and Seneca warriors.

Rather than contest Herkimer’s forces openly, the British forces laid an ambush and waited for the militiamen to walk into the trap—which they did. Traveling east to west, the militia dropped down a steep slope into a marshy ravine, but before they could ascend the western slope, the hillsides erupted in gunfire. “Muskets blasted from behind trees,” the battlefield brochure says. “Indian tomahawks flashed.”

I reach the same ravine by walking in the opposite direction—west to east—following a trail from the parking area near the monument. The trail crosses a rolling field and passes some historical markers before making a gentle descent into the ravine. I can see, on the far side, that the path down the eastern slope is much steeper. A small brook runs through the bottom of the ravine, which is swampy and soft—an easy place to get bogged down if ambushed.

Herkimer was shot from his horse and a musketball shattered his leg. Although wounded, he helped rally his men on the high ground where the monument now stands. “Sitting beneath a beach tree, propped against his saddle, and smoking a pipe, Herkimer continued to direct the battle,” the brochure says. That image is captured in one of the bas-relief sculptures attached to the monument. A monument marks the former spot of the beech tree.

The day did not go well for Herkimer’s men, who suffered around 450 casualties. The British forces, in contrast, suffered around 150 casualties, although “the battle was so brutal,” the park brochure says, that the Mohawk and Seneca warriors “abandoned the fight, forcing the British and Tories to withdraw, as well.” Herkimer would later die from his wound after an “unskilled amputation” of his leg.

Although sharp and bloody, the fight had an “ambiguous” outcome. Herkimer’s men, who suffered badly, did not bring relief to the fort; however, forces inside the fort used the distraction to raid the undermanned British camps outside. The sortie demoralized British forces so badly that the Mohawks abandoned the siege entirely. Word of the sortie actually reach the Oriskany battlefield during the fight and may have contributed to the decision by the warriors to pull out.

St. Leger withdrew completely by August 21 when word arrived of the approach of another column of relief, this one led by Benedict Arnold. Arnold’s column marched through the Oriskany battlefield, where many unburied bodies still littered the ground. The sights and stench sickened his men.

The brochure describes the battle of Oriskany as “one of the bloodiest battles of the American Revolution.” The Iroquois reportedly call it “A Place of Great Sadness.” Today, the Oriskany Battlefield is a New York state park but is administered through a cooperative agreement with Fort Stanwix National Monument.

Trail map for the Oriskany Battlefield