Emerging Revolutionary War is honored to welcome back historian Katie Turner Getty. Biography of Ms. Getty is below the post.

On April 19, 1775, the placid farm of fifty-eight-year-old Jason Russell of Menotomy erupted into carnage when he, along with eleven other Americans, were shot and bayonetted by British soldiers in his home and yard. 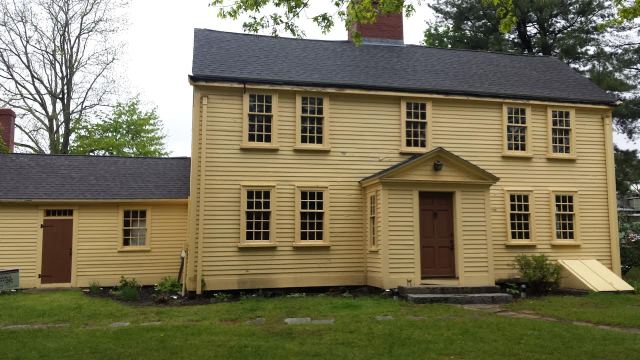 As American militia and minutemen poured in from surrounding towns, the British—fatigued yet furious—found themselves under increasingly heavy musket fire. As they pulled back from Concord and retreated to Boston, the main column passed near Russell’s house which stood near the battle road. Russell had just returned home after secreting his family at a nearby farm. Unbeknownst to him, American minutemen and British soldiers would soon converge upon his property and a desperate battle would occur within the walls of his own house.

Earlier that day, twenty-six-year-old Gideon Foster had set off from Danvers with a company of minutemen. The men had set a scorching pace and made the sixteen mile journey to Menotomy in four hours, running half the way.[1] Upon arriving, Foster’s men joined others from Lynn, Beverly, Salem, Dedham, and Needham.[2]  Some took cover behind trees and others in Russell’s yard, where a breastwork was constructed out of shingles.

The Fight at the Jason Russell House, bicentennial painting by Ruth Linnell Berry (1974). Appearing with permission from the Arlington Historical Society.

The men focused their attention on the approaching main column of British troops and fired upon them. Capt. Israel Hutchinson, a seasoned French and Indian War veteran, warned that flank-guards would likely be traversing the fields alongside the road[3], helping the main column to pass unmolested. But before the men could reconsider their position or move to a more defensible location, the flank-guard was upon them, trapping the men against the main column.

In a frantic search for cover, many of the men bolted into Russell’s house. Jason Russell, too, attempted to dash inside but was slowed by his lame leg.[4] He was shot twice and fell on his doorstep. The soldiers tore inside the house in hot pursuit of the men, bayonetting Jason Russell’s body eleven times as they passed.

Once inside the house, the Americans had no choice but to fight for their lives in rooms with no egress, in very close quarters, against raging, bayonet-wielding soldiers. It was a bloodbath. With two rooms on the bottom floor, a narrow stairwell, and two rooms on the top floor, Jason Russell’s house offered very little refuge.  Soldiers outside the house hailed musket fire into the windows. 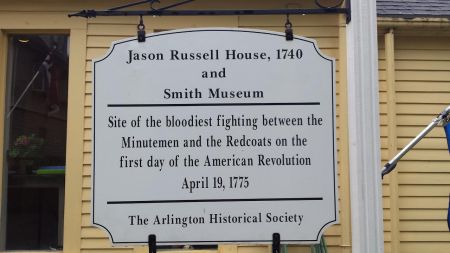 Sign depicting what happened at the Jason Russell House on April 19, 1775

With nowhere else to go, several men rushed into the cellar. What at first would seem to be an ill-advised hiding spot turned out to be the only sanctuary that Russell’s home could offer. Taking position near the bottom of the stairs, the men raised their muskets and shot dead the first soldier who descended.[5] Any other soldiers who attempted to follow were met with blazing musket fire. Holes left by musket balls are still visible in the stairwell, attesting to the firestorm.

In 1835, sixty years after the bloodbath at Russell’s house, a memorial was erected in Danvers to commemorate the townsmen who lost their lives in Menotomy that day. Danvers lost the second highest number of men, after Lexington[7], and all of them at Jason Russell’s house. Foster, the commander of the company of minutemen who had ran halfway to Menotomy, was by then the last surviving Danvers veteran of the war. Aged eighty-six, he addressed the crowd assembled for the dedication of the monument and recounted the events of April 19th:

On that morning, more than one hundred of my townsmen hastened to the field of battle…ready to offer their lives on the altar of their liberties. Seven of those who thus started in the prime of life and vigor of manhood, ere that day’s sun descended in the west, were numbered with the dead.[8]

Foster called the dedication of the memorial “One of the happiest days and most pleasing events of my life.”[9]

In total, twelve Americans were killed at Jason Russell’s house.  Jason’s wife, Elizabeth, returned home to find her husband dead. He and the other fallen Americans, their bodies riddled with musket balls and slashed by bayonets, had been laid out on the floor in the kitchen, the blood from their wounds pooling around them. Elizabeth later said that “the blood in the room was almost ankle deep”.[10] 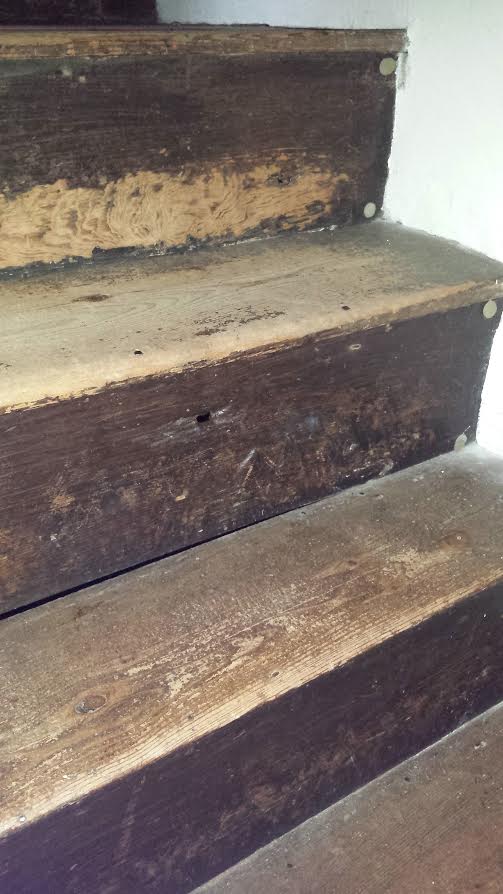 Musket ball damage to the staircase of the Russell House

*Biography: Katie Turner Getty is a lawyer, history enthusiast, and lifelong resident of Boston. She holds an A.A. from Bunker Hill Community College in Charlestown, Massachusetts, a B.A. in History from Wellesley College, and a J.D. from New England Law Boston. She can often be found exploring historic sites both on and off the Freedom Trail.

The Jason Russell House is located at 7 Jason Street in Arlington, Massachusetts. Their website is http://www.arlingtonhistorical.org/visit/jason-russell-house/

2 Responses to Ankle Deep In Blood: The Jason Russell House