“He Stood the Field with Great Bravery”; The Story of Major Andrew Leitch, Part 2 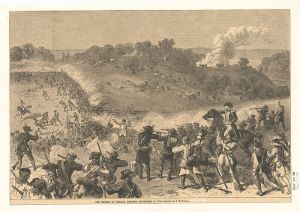 19th century print of the Battle of Harlem Heights. The image shows the Americans attacking the British right flank.

After the Battle of Long Island, American forces evacuated to Manhattan Island. But with the British in command of the waters around New York, they easily could land their forces anywhere along Manhattan Island. On September 15th, the British crossed the East River north of New York City and landed at Kip’s Bay, easily pushing aside the American forces there. American forces in New York City were nearly cut off, but quickly retreated up Manhattan Island to Harlem Heights and began to dig in. On the morning of the next day, British troops arrived in front of the American lines at Harlem Heights. Washington expected an attack and decided to take the initiative.

Washington ordered a small party of 150 men called “The Knowlton Rangers” under the command of Lt. Col. Thomas Knowlton to move out and reconnoiter the British position.  Knowlton quickly recognized the British were not planning a major assault but his force had brought about the attention of the British light infantry, soon the Knowlton Rangers were outnumbered and quickly retreated back to the American lines.  When Knowlton reached safety, the British light infantry paused, placing them out in front of their main lines. Washington seized the opportunity and ordered an assault on their rear by Knowlton’s men and a reinforcement of 200 Virginia riflemen from the Third Virginia under Major Leitch.

Though the American attack was supposed to be in the rear of the British light infantry, but because of  confusing terrain and attacking too soon, the flanking column instead hit the British in their flank. The effect still had an adverse effect on the British light infantry as they began to fall back. The Americans fought with determination and bravery. Knowlton went down mortally wounded.  Colonel Griffith wrote of Leitch “He conducted himself on this occasion in a manner that does him the greatest honor, and so did all of his party.” Washington wrote the next day that “The General most heartily thanks the troop commanded yesterday by Major Leitch, who first advanced upon the enemy, and the officer who so resolutely supported them.”

At the head of the attacking column both Knowlton and Leitch led their men forward to attach the British flank. Early in the attack both men went down  wounded. Knowlton died on the battlefield, Leitch took three musket balls to the abdomen and was carried off the field. At first most reported his condition as improving and he was thought to survive his ordeal.  Washington wrote “Majr Leitch of Weedons Regiment (Third Virginia) had three balls through his side, and behaved exceedingly well – he is in fair way of recovery.”

Soon the British began to retreat back to their main line. Washington then ordered an attack along his line and the British light infantry fell back to the main line in confusion. Soon the entire British line began to give way. After about a 90 minute fight, Washington learned that more British forces were arriving on the field and ordered his men back to the main line. Though not a major victory, the American army had finally stood up to the British and even for a moment, pushed them off the field in combat. The British suffered 14 killed and an estimated 154 wounded, with the Americans suffering 30 killed and 100 wounded.

Though most believed that Leitch was recovering from his wounds, by September 20th Gen. Horatio Gates wrote “Major Leitch of Maryland was wounded and despaired of.” As his condition worsened, there was little for regimental surgeon David Griffith could do but to try to ease Leitch’s pain. Griffith wrote to Leitch family friend Richard Henderson on October 3rd that “[I] disagreeable duty of informing Mrs. Leitch through you, of the death of her husband is imposed upon me. He expired yesterday morning at Hackinsack Bridge where he had been removed for his better accommodation…But on the 28th Sept he was seized by lock’d jaw – with spasms about his neck and throat so violent as to baffle every effort to minister to him by medicine.”  It seems the death of Leitch was a tough and unexpected blow to his fellow officers in the Third Virginia Regiment.

Where Major Leitch’s remains are today is a mystery. Captain John Chilton wrote on 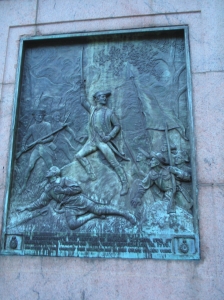 Commemorative Plaque showing the wounding of Knowlton and Leitch

October 4, 1776 that “the brave Major Leitch who died of his wounds received the 16th was interred yesterday by the side of Major Henly.” We know the general area of the American camps in the fall of 1776, but this burial location is long lost to history. In 1897, historian Henry Johnston wrote in his account of the Battle of Harlem Heights that Knowlton and Leitch are probably buried somewhere “on St. Nicholas Avenue, between 135th St and 145th St.” in New York City. Of course the land has changed a lot since then and whatever remains were left were destroyed by modern development.

Today the area of the Harlem Heights battlefield is now under the campus of Columbia University in New York City. Today there is a simple plaque on the wall on the eastside of Broadway north of 117th Street. This plaque commemorates the Battle of Harlem Heights and depicts Major Andrew Leitch as well as Lt. Col. Thomas Knowlton (who was mortally wounded in the same attack as Leitch). Near here is where Leitch was mortally wounded turning the flank of the British line.

The search for Andrew Leitch continues. His contribution to the American Revolution is well documented through the letters of George Washington and others. When he moved to Dumfries, VA and where he lived is still unknown. We do know that he was influential enough to be elected to Prince William County’s Committee of Correspondence in 1774 and involved in the efforts to raise men and funds for local companies of troops. Continued research in his widow’s pension cases as well as researching contemporary archives may turn up new information. For now, he is honored with a plaque in New York City and a small park here in Virginia. My hope is that this story will end with an appropriate understanding and remembrance of a man who gave his life for our nation’s independence.

Entry in George Washington’s Papers for March 16, 1775: “Went to Dumfries to review the Independent Company there, Dined and Lodged with Mr. Leitch…”

3 Responses to “He Stood the Field with Great Bravery”; The Story of Major Andrew Leitch, Part 2