A reflection on the previous month’s exploration in South Carolina. 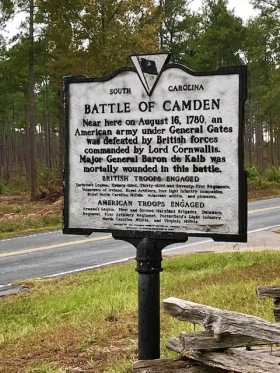 August 16, 1780 would prove to be a devastating day for the American Army in the south, known as the “Grand Army” by its commander, Maj. Gen. Horatio Gates, the Hero of Saratoga. The battle between this army and that of Lt. Gen. Charles, Earl Cornwallis, in the Pine Barrens near the South Carolina town of Camden, would end in the total rout of the Americans and the destruction of the reputation of its commander. It would also temporarily leave the southern colonies without a central army to oppose the British.

On November 1, members of the Emerging Revolutionary War Era staff took a road trip to Camden, SC to research the battle, walk the battlefield and meet with local historians in preparation for an upcoming addition to our book series, on the Battle of Camden.  On the way down, we took the opportunity of visiting other sites of combat, actions that occurred prior to and after the fight at Camden.

At the Waxhaws, near the border of North and South Carolina, sits a monument to Buford’s Massacre. The battle between Virginia Continentals, commanded by Col. Abraham Buford, and dragoons of Lt. Col. Banastre Tarleton’s American Legion, took place here on May 29, 1780.  The battle site itself remains privately owned. Across from the field, along SC Route 522 near Buford, SC, is a small park owned by the American Battlefield Trust. Along with the monument commemorating the battle is a mass grave, where the remains of 84 of those lost Virginia soldiers lie. 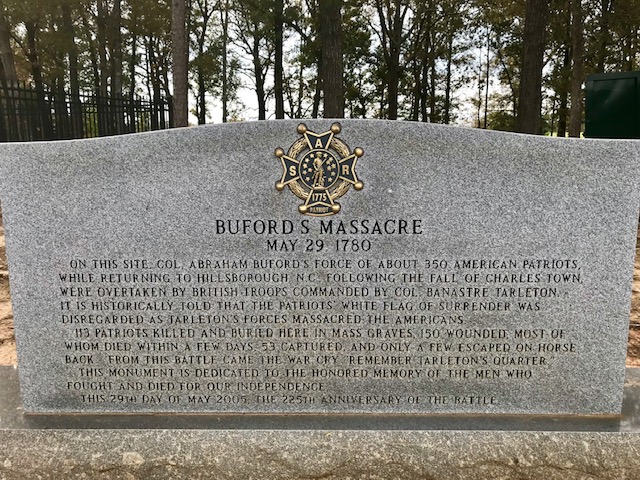 Nearer to Camden, along US Route 29 in Chester County, SC, are historical markers commemorating the battle of Fishing Creek, which took place at the site just two days after the loss at Camden.  Approximately 160 troops of Tarleton’s Legion completely surprised and routed around 800 South Carolina militia under the command of Gen. Thomas Sumter, known as the “Gamecock”. Tarleton’s force killed over 100 Americans and captured many more. Sumter, who had been sleeping under a wagon when the Legion attacked, was able to make his escape. 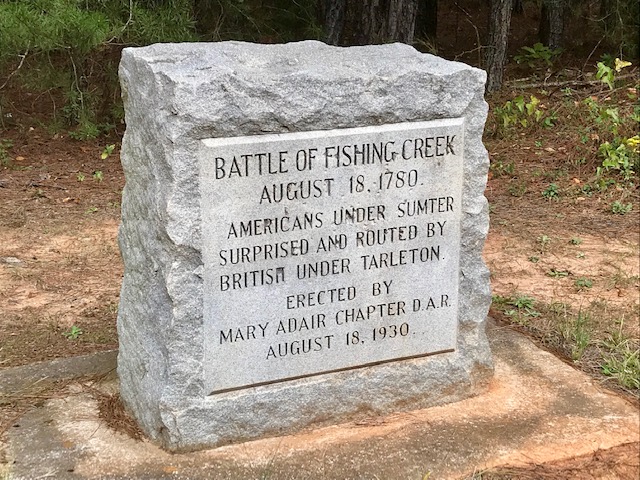 As we made our way to the town of Camden, we passed by the battlefield site, which is owned by the Historic Camden organization. We were delighted to see that the dense pine forest has been recently timbered, in an effort to return the battlefield to its 1780 appearance. Walking the battlefield with historian and author Jim Piecuch, in the rain no less, gave us a great overview of the different phases of the battle and a much better understanding of the terrain.  Likewise, our meeting with local battlefield historians, Charles Baxley and David Reuwer, members of Southern Campaigns of the American Revolution, provided us with great insight into the structure of the battle and the personalities of some of the combatants. We are enormously grateful to these gentlemen for their time and look forward to further contact as our book begins to take shape.

Within the town limits of Camden, proper, can be found other treasures. Historic Camden Revolutionary War Site is a 501(c)3 private non-profit organization that commemorates the colonial town and the battle. Executive Director, Hallie Brazier, took time with us to discuss her site and the foundation’s vision for Historic Camden going forward.

The final resting place and monument to Maj. Gen. Baron Johann De Kalb, who served as 2nd in command of the American forces engaged and who died from the 11 wounds he received during the battle, can be found on the grounds of Bethesda Presbyterian Church. The inscription on the monument inspired us: “Here Lie the Remains of Baron De Kalb, a German by Birth, but in Principle, a Citizen of the World.”

Across from the old courthouse is the site of the town Gaol, originally built in 1771 and a witness to the British occupation. Probably the most famous of the Gaol’s occupants was the teenaged future president of the United States, Andrew Jackson. Most likely, the young Jackson could hear the gunfire from the Battle of Hobkirk’s Hill on April 25, 1781.

The Battle of Camden played a pivotal role in the war in the south. Its significance is that it demonstrates the failure of the British Army under Lord Cornwallis to win control of the southern states, despite emerging victorious in most of the battles. We of Emerging Revolutionary War Era anticipate the pleasure of many more visits to Camden as we continue the preparation of our manuscript. It was a road trip to remember.

5 thoughts on “Visiting the Scene of Action: Battle of Camden”